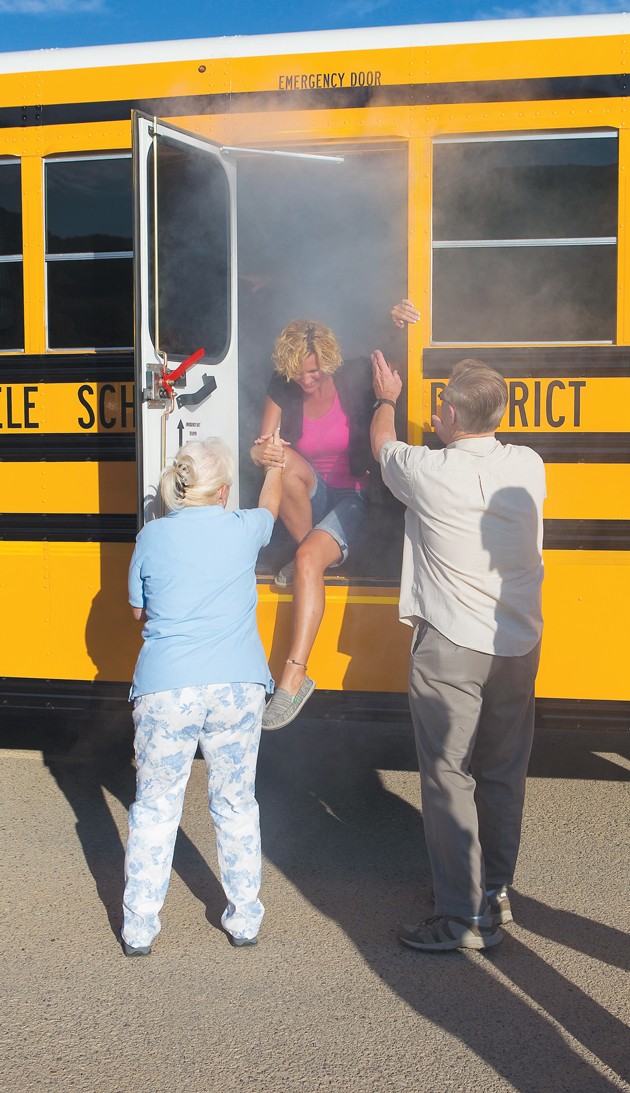 Jeanette Long and Charles Townsend help Allyson Yates evacuate from a smoke-filled school bus during the annual training day. The drill is part of the eight-hour training day to help bus drivers be ready for anything once the school year starts.

At 8 a.m. Wednesday, three school buses crammed full of passengers and parked outside the Eagles’ Nest at Tooele Army Depot, began to fill with smoke.

As dark vapors filled each bus, the passengers banged on the windows and cries of “I can’t see” were heard from outside the buses.

The scene was a drill. The passengers were Tooele County School District’s 100 bus drivers who were participating in an annual eight-hour training prior to the start of the new school year, according to Jannette Long, trainer for the TCSD transportation department.

“Each year bus drivers are required to have two practice evacuations with their passengers,” she said. “We wanted to not only review emergency procedures including evacuation, but also have the drivers experience an evacuation from a passenger’s perspective.”

Along with emergency procedures, the drivers learned about bus maintenance, distracted driving, blood borne pathogens, drugs and alcohol, and bullying.

In addition to the eight hours of training at the beginning of each year, bus drivers also receive an additional six hours of training during the year and are required to recertify in first-aid and CPR every two years, according to Long.

“We take safety very serious,” she said. “Parents need to be assured that their children are as safe as possible when they travel in a school bus.”