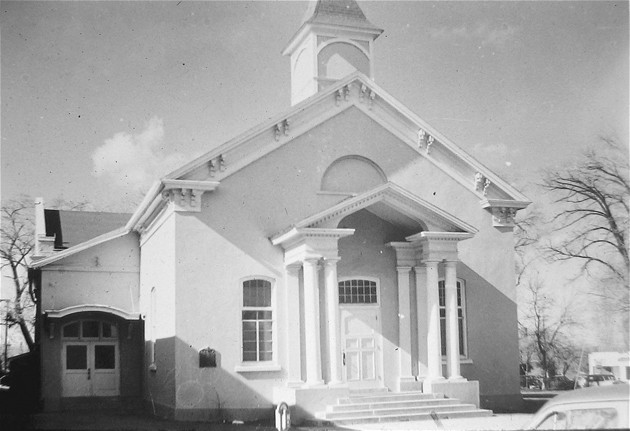 A photo of the old South Ward building which was located at the corner of Main and Vine streets in Tooele. The building was constructed in 1869 and was in use for nearly 100 years. It was demolished in 1968. Veterans Memorial Park now occupies the corner where it stood.

When I came home from an LDS mission to Sweden in 1969, I was surprised to find out that the church building on the corner of Main Street and Vine Street in Tooele had been bulldozed and nothing was left of it but the old bell that was in the steeple in that old venerable structure that was built in 1869. It was the church building I grew up with and attended on Sundays and during the week for other activities. This was the site of the first permanent church in Tooele County, and was also the home of the first stake presidents in Tooele County. What a rich history this wonderful pioneer-built church had in its 100-year history.

On Thursday, Feb. 4, the Settlement Canyon Chapter of the Sons of Utah Pioneers met virtually for the second time during this COVID Pandemic and were favored with a remarkable presentation by Bruce Dunn. His topic was a history of the stake presidents of the Tooele Utah Stake which began in 1877 in that original Tooele Ward Building pictured here. The following is just a skimming of the research Bruce did for this fact-filled presentation.

In 1877 Brigham Young and others of the General Authorities of The Church of Jesus Christ of Latter-day Saints visited the Tooele Ward building and called Francis Marion Lyman to be the first president of what would become 14 stake presidents to date. The Tooele Utah Stake included all of Tooele County, and was the 15th stake organized in the church. Brother Lyman was called to move from his home in Fillmore, Utah, and live in Tooele and preside over this new stake. He later became an Apostle in the church.

The second president was 24-year-old Heber Jeddy Grant, sent from Salt Lake City to succeed Brother Lyman. His first public speech was in the Vernon Ward and lasted all of 10 minutes. He was embarrassed and sought help from a higher power and spoke for an entire meeting in Grantsville. He would later become the Prophet and President of the church.

The third stake president was Hugh S. Gowans, the first local man called to that position. He governed the stake for 29 years.

Number four was Charles Alvin Orme. He was known for his personal handwritten letters of congratulations, council, and thanks. He served for 17 years.

Next in line was Alfred L. Hanks, the fifth president. He was president for 11 years during the middle of the Great Depression and did a masterful job of steering the stake through those troublesome years.

Alex F. Dunn, Bruce Dunn’s grandfather was the 6th president. In his 20 years, he started the church welfare farm in Vernon. By the way, the Vernon Ward is the only Ward in the Tooele Stake that has not changed. Its boundaries and name have remained the same since its inception. President Dunn is also known for dividing the stake with the formation of the Grantsville Stake. He would also divide the Tooele Stake and form the Tooele North Stake. The headquarters for this stake was built on the corner of Main Street and Utah Avenue. It was an attractive building featuring a grand staircase entry and stained glass. It has also been torn down.

The 7th stake president was Howard J. Clegg, a prosperous cattleman. He was president in the Main Street building and was noted for presiding over the building of the new Tooele Stake Center, dedicated in 1966. From that growth came the 1st, 6th, and 12th wards in that building, as the Main and Vine Street building was torn down.

The ninth stake president was Joel J. Dunn. He was Alex F. Dunn’s son, and is father of Bruce Dunn who made this presentation. Like his father who presided over the Diamond Jubilee of the stake, Joel presided over the stake’s Centennial Celebration. He was also president when the Tooele Utah South Stake was formed from the division of the Tooele Stake. He is known for settling the debts of the Rush Valley and Dugway wards and bringing them into the new stake.

Robert Doran was the 10th president. He presided when the church disbanded local Quorums of Seventy. Before this the Tooele Stake Seventy Quorum was the 43rd in the church.

James Lynn Bevan was the gentle and beloved 11th president of the stake. He served for nine years, which is the norm for stake president service today. He was the leader and driving force behind the Tooele Pioneer Museum at 50 E. Vine Street in Tooele. Since its face lift this past year, the museum has been renamed the James L. Bevan Tooele Pioneer Museum. Jim was the definition of service.

Next was the 12th president, Max Molgard, from 1996 to 2005. In his presidency wards were given names instead of numbers. He formed the Highland Ward and the Skyline Ward. President Molgard is now serving in the leadership of the church’s Correlation Department.

From 2005 to 2014 Sergio Abarca presided as the 13th stake president. He dissolved the Highland Ward, built a new chapel in Vernon and formed the Stockton Second Ward. He is an M.D. in Tooele and hails from San Diego.

The present president is Todd C Thompson. As the 14th president, not only has he presided over the stake during this pandemic where even Stake Conference is held virtually, but he split the Young Single Adult Ward into congregations in both Tooele and Stansbury Park. He also created a new ward in Stockton.

Of these fourteen stake presidents four are still living today. Bruce Dunn did a masterful job on this research-heavy exposition. The photos of these fourteen men are found in the Tooele Utah Stake Center and the James L. Bevan Pioneer Museum.

Darrell Smith is the Publicity Chairman for the Settlement Canyon Chapter of the Sons of Utah Pioneers.