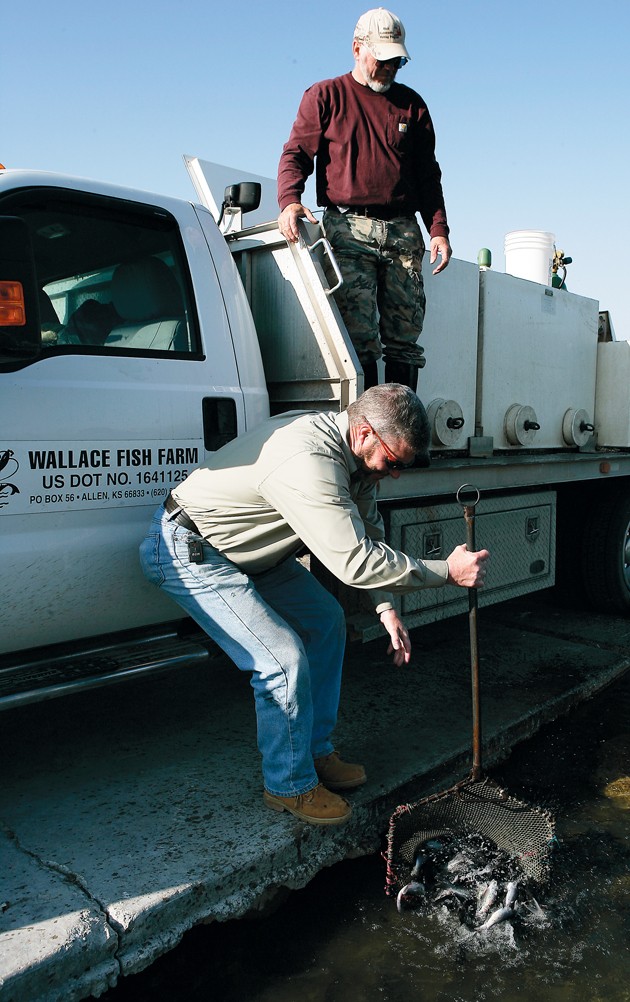 As the net dipped down, dozens of dark, wriggling catfish tumbled out toward the surface of Stansbury Park Lake.

Even after hours spent in insulated tanks, the channel catfish were quick to explore the shallows near the boat launch.

A total of 15,000 fish were released into Stansbury Park Lake on Tuesday morning to restock its population of feeder and game fish. The fish restocking includes 12,500 bluegills, with the remaining 2,500 split between channel catfish, largemouth bass and black crappies.

The cost to purchase, transport and stock the fish in the lake came out to about $15,000, according to service agency chairman Neil Smart.

After seeking bids and a farm with the right combination of species, the service agency settled on purchasing the fish from the Wallace Fish Farm in Allen, Kansas. Owner Charlie Wallace drove the pickup truck, outfitted with oxygenated, insulated tanks, on the more than 1,000 mile journey.

Wallace said this time of year is generally ideal for introducing fish to a lake because its easier for them to adjust to the new environment.

The initial population of fish planted in the lake is heavy on bluegills, a feeder fish, so that bass, crappie and other game fish will have something to eat. Smart said the service agency also plans to introduce more fish into the lake next year.

“Next year we’re going to add to it again,” he said. “We’re doing it in stages.”

The young fish used to stock the lake are still small, with the channel catfish the largest at about 8 inches long. Despite their diminutive size, the bluegills are already sexually mature and will be able to spawn this summer.

The new fish will repopulate a lake after thick ice and low oxygen saw a massive die off in March 2013.

To ensure the new fish population is a success, service agency officials are encouraging an “adopt-a-fish” program where residents help feed the new fish.

“If people want to buy a bag of fish food and throw it off the back of their dock, it will help the fish grow faster,” Jones said.

Questions about what food to feed the lake’s new inhabitants should be directed to the service agency staff.

Wallace said the fish should grow rapidly in the larger confines of the lake, but Smart and Jones said residents should wait about a year if they expect to hook any decent-sized fish.

Only Stansbury Park residents are allowed to fish the lake, and it is catch-and-release only. Because the lake is private, residents are not required to have a current Utah fishing license.