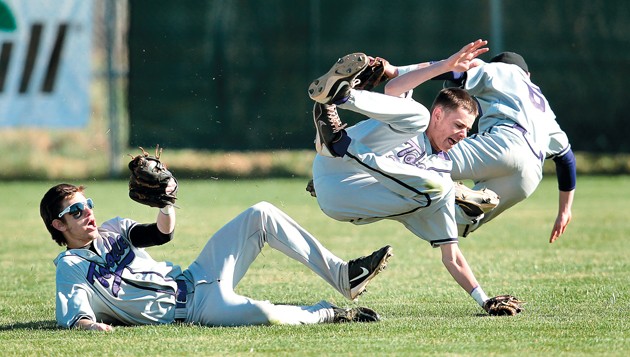 Photo Editor Maegan Burr received a first place award for Best Sports Photograph for a photo she took of three Tooele High School baseball players colliding into each other while scrambling for the ball during a game against Grantsville High School.

Burr also received a second place award in the Best News Photograph category for a photo of a woman lying on Broadway Street after a deputy had used a Taser on her during an arrest.

Photos taken by Burr during Tooele County’s Fourth of July celebrations and the subsequent layout of the images by Liz Arellano earned the paper a first-place award in the Best Photo Page category.

Former Editor Jeff Barrus received a first place award for Best Editor’s/Feature Column, which was based on three columns he wrote in 2012. The columns varied in topics from Barrus writing his own obituary, to claiming why Grantsville, Utah, is the best Grantsville in America, and why in politics there are limits to local wisdom.

The paper received a first place award for Best Special Section for its 2012 edition of Tooele County Magazine. The Transcript-Bulletin also garnered a first place award for Screw Up of the Year. That award was earned because of a December front page feature photo that showed a goose in flight — with its head accidentally cropped out of the photo.

Staff Writer Tim Gillie received two awards for work in 2012. Gillie received second place for his continuing coverage of Stansbury High School’s dress code debacle after several female students were turned away from homecoming for wearing dresses that were considered too short. He also received third place in the Best General News category for his initial story on Tooele County’s budget crisis.

Staff Writer Lisa Christensen’s series on the hardships of the McCracken family, the family chosen for the Transcript Bulletin Christmas Benefit Fund in 2012, earned her a second place award for Best Feature Series.

Sports Columnist David Gumucio took home third place for Best Sports Column, which consisted of three From the Sidelines columns he wrote in 2012.

On the advertising side, the Transcript-Bulletin garnered a second place award for Best In-House Self Promotion, and third place awards for Best Advertising Idea and Best Staff Produced Ad.