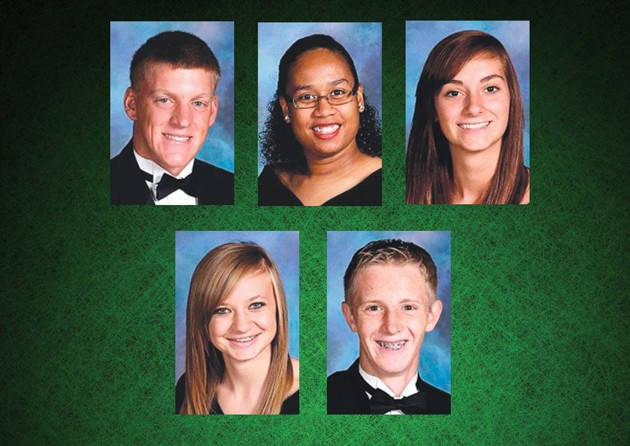 William Curtis Estes, son of Col. A. Scott and Donna Estes of Dugway, was born at Fort Stewart, Ga. He has lived in six states including Utah during his life. He was a member of the baseball, basketball and track and field teams. This year he was named captain of the basketball team. In all, he will earn seven varsity letters by the end of this school year. He is a member of the National Honor Society, serving this year as president. He is also a member of the DHS award-winning band, playing the clarinet. Estes is a member of the character education group Reaching Up to Something Higher, or RUSH. His hobbies are weight lifting, marksmanship training and basketball. He has received an appointment to the United States Military Academy at West Point where he plans to major in mechanical engineering. Upon graduating from West Point he plans to pursue a career in the United States Army.

Katreena Lynn Johnson, daughter of Joseph and Rita Johnson of Dugway, is a senior at DHS. She has played volleyball and been on the track and field team for four years. She has played basketball for three years. She has also played the alto saxophone for four years in DHS’s senior band and has been a part of Dugway Hope Chapel’s praise and worship team. She is a member of the NHS. Johnson’s interests are politics, literature and music. Her current pastimes include singing, writing and reading. She recently signed with the United States Air Force and will be leaving for boot camp in the fall.

Crystal Marie Osbahr, daughter of Anthony and Angie Osbahr of Rush Valley, will graduate from DHS on May 22. She is attending Tooele Applied Technology College where she is majoring in cosmetology and barbering. She is golf captain and volleyball co-captain. She also participated in basketball and cheerleading. This year she is senior class historian. She also participates in RUSH. She is looking forward to a good golf season and is excited for graduation. She plans on continuing her education at TATC and pursuing a degree in business.

Kaitlin M. Simmons is the daughter of Donald and Melissa Simmons of Erda. She lived in Dugway until recently moving to Erda. She was a member of the volleyball team and a cheerleader, and was named captain of both this year. She is a member of DHS’s award-winning band, playing the flute. She is a member of the NHS and RUSH. Simmons is also the co-editor of the yearbook. Her hobbies include reading, art and spending time with family and friends. Her goals for the future include attending Utah State University and majoring in medical assisting.

Quentin B. Thackeray, son of Todd and Lorillee Thackeray of Skull Valley, was born in Kissimmee, Fla., but moved when he was six months old. He and his family moved to Skull Valley when he was 12. He has been a member of the track and field team and cross country team. He is a member of the DHS band. He is currently the student body vice president and a member of the NHS. He is also in the DHS production of “The Importance of Being Earnest” and will compete in the region drama festival. His future plans include going on a mission for The Church of Jesus Christ of Latter-day Saints after he graduates from high school. He then plans on attending Utah State University-College of Eastern Utah and majoring in mechanics. He would like a future in agricultural mechanics so that he can still live near the ranch life. His hobbies include reading, motorcycles and sports cars.