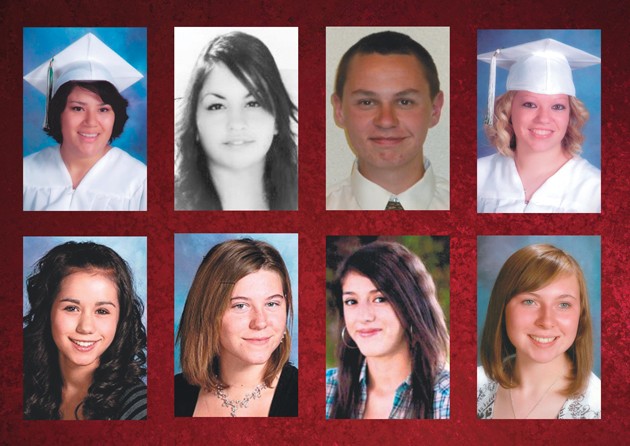 The Sterling Scholar Awards are sponsored by the Deseret News and KSL 5 Television. The program publicly recognizes high school seniors from 68 high schools along the Wasatch Front in 13 different categories for outstanding academics, stellar leadership, exemplary citizenship and exceptional service to school and community. Every Sterling Scholar must complete a portfolio documenting their academic achievements, leadership and service.

With the growth in the number of high schools participating in the competition, a new level of judging was instituted this year for the first time. In the first round, students were judged solely on the basis of their portfolios. Next, they were personally interviewed at the semi-final competition by a panel of three judges who are experts in the various categories.

Finally, 15 finalists in each category were selected to move on in the competition. The finalists again competed with their portfolios and another interview with three new judges. A winner and two runners-up in each category were announced at the Sterling Scholar Award ceremony, which was held at Cottonwood High School in March.

Diana Barrera was born in Nayarit, Mexico, on May 7, 1994 and is the daughter of Andrea Barrera. She was raised, alongside a few of her cousins, on her grandmother and step-grandfather’s cozy little estate in Mexico until she was 6, at which time she immigrated to the United States. Although she has few memories of her childhood in Mexico, she has many fond memories of her uncle Issac and grandfather, who both passed away when she was around 12. She also remembers taking brief trips into the city with her grandmother, where they enjoyed fresh hot cakes and nanches (small pitted yellow fruit) that they bought from nearby street vendors. Her grandmother still lives in Mexico today. Barrera has attended more than six high schools in her lifetime as a result of a very nomadic lifestyle. She has attended West Wendover High School and Wendover High School. She attended four others while living in Memphis, Tenn., for three years. She believes the people she has had a chance to meet and the experience she has received as a direct result of her lifestyle gave her an edge in the Sterling Scholar competition because she has a very extroverted personality and feels she can connect with a wide range of individuals. Barrera is the vice president of the National Honor Society this year and is also an officer for Family, Career and Community Leaders of America. She earned college credit hours for psychology through concurrent enrollment classes. She has also attended two leadership conventions. Barrera hopes to acquire a scholarship to attend college to receive a degree in English and become a secondary language arts educator. Her family, including her mother, brother Raul, sister Andrea Jr. and extended family, are ecstatic about Barrera’s upcoming graduation and are hopeful for her future goals for college as she will be the first person in her family to attend and graduate from a United States college.

Martha Dominguez is the daughter of Candido and Maria Dominguez. She was nominated as a Sterling Scholar after showing her ability to excel in school academics. Throughout high school, she has been granted great opportunities and at the same time has seen herself short in availability because of her responsibilities at home. Dominguez is a member of the NHS and has maintained a 3.8 cumulative GPA. She has also had fascinating experiences in the science categories involving NASA. By participating in extracurricular activities, Dominguez has been able to assist and get involved in local projects and duties. She now finds herself ready to seek opportunities and continue to pursue her future goals.

Tyler Hardman is the son of Spencer and Tammy Hardman. He has lived in Ibapah since he was 2, but has attended Wendover High School since seventh grade. Before that, he attended Ibapah Elementary. Hardman’s hobbies outside of school include hunting, fishing, motorbike riding and golfing. Hardman is an Eagle Scout, a member of the student council and a member of NHS.

Adriana Higley is the daughter of Dale and Betty Higley. She has maintained a 3.97 cumulative GPA throughout school. She has participated in student council either as a student body officer or class officer all through elementary and high school. She has participated in volleyball and basketball all four years of high school, and participated in track for one year. She received the Academic All-State in both volleyball and basketball. Outside of school, she has continued her leadership skills by holding several callings at her church. She recently received her young womanhood medallion from church. Higley has been a member of the NHS for two years and participated in Pro-Start Competitions. She is currently participating in online school for pre-calculus along with anatomy and chemistry.

Savanah Hunt is the daughter of Tabare and Mandolin Hunt. This year she served as the student body president. She has always been active in student government and extracurricular activities at WHS. She has been involved in basketball as a player and manager, volleyball, track and field and baseball as a manager. She attended The Church of Jesus Christ of Latter-day Saints’ seminary program for four years and is a member of the NHS. Over the last two years, she has taken and successfully completed at least one college-level class each semester. She has maintained a cumulative GPA of 3.8 throughout high school. Because she has all the necessary credits to graduate, she spends one class period each day as an unpaid intern for a local daycare facility called “Kids Are People Too,” as she intends to pursue a degree in childhood development. Hunt has always done well in social science classes and has always had a great interest in the subject.

Katie LeMieux is the daughter of Bill and Julie LeMieux. She was born in Salt Lake City, but moved to Wendover at age 9. She has attended school in Wendover ever since. LeMieux has been active in cheerleading, NHS and Civil Air Patrol. She also keeps a part-time job year-round. She enjoys business and will be pursuing a career in international business administration and aviation operation. LeMieux has completed concurrent enrollment courses as well as taking rigorous online courses. She has also had experience in real-world business by working as an intern.

Erika Maldonado is the daughter of Rosa Maldonado. She is a member of the NHS and has maintained a cumulative GPA of 3.5. She has also been a part of student council throughout high school. Maldonado plans to pursue a career in the study of physical education and physical therapy. She will be the first to go to college in her family. She is the oldest of four children. Maldonado is also involved in many sports like cross country, basketball, track and volleyball. She currently holds the school’s records for the long jump, triple jump and 4×200 relay.

Valerie Murphy is the daughter of Kirk and Radine Murphy and is the youngest of four children. She has lived in Wendover all her life, and loves living in a small town. Her participation in family and consumer science classes throughout her high school career has prepared her for the future role of a wife and mother. Murphy has a passion for working with plants and plans to pursue that interest as a career studying botany and horticulture at Utah State University in the fall. Some of her leadership and community involvement includes ambassador and junior staff leader for the Hugh O’Brian Youth Leadership Seminar and Utah Rural Electric Association, two-year president of NHS, student body secretary, student council class officer, volunteer at the local elementary school, and volunteer at the local food bank/thrift store. Her involvement in church as seminary president and young women’s laurel class presidency has offered many opportunities to serve in her small community. Murphy’s other interests include hunting, fishing, camping, bicycling and spending time with her family.