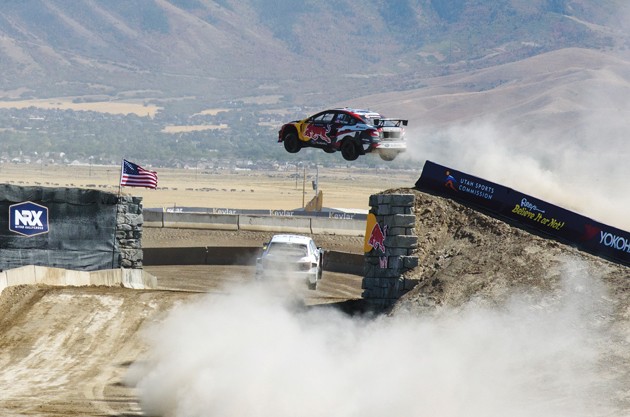 Racing on the Rally Car Course during the 2019 Nitro World Games. The Nirro World Games will return to UMC in 2020.

After its first full year of ownership, Utah Motorsports Campus is coming out of its corner swinging with returning events and new activities.

UMC released its 2020 schedule in a press release Monday.

Management officials of the track also discussed what they have learned in their first year of ownership and how that knowledge will affect the world-class facility as it moves forward.

“First, there has been a lot of discussion about the financial history of this facility,” said Dixon Hunt, UMC senior vice president and general manager. “2019 was our most profitable year ever.”

Hunt clarified that the facility did not actually turn a profit in 2019, but it came closer than it ever has and is poised to make a profit for the first time in the facility’s history in 2020.

That plausible profit is made possible by several things, but the most significant change has been a “flipping” in the way UMC negotiates for events, Hunt said.

“Before we paid a sanction fee to the organization to bring their event to our facility,” Hunt said. “Now we approach the organization and say ‘Hey, we have to have an agreement that makes this event profitable for both of our organizations.”

The result is UMC becomes a facility that organizations use for their event, rather than the other way around, according to Hunt.

And organizations are buying in, partly because due to Larry Miller, UMC was built as a first-class facility with all the amenities racers need.

“We have garages, a clubhouse, bathrooms, showers and other facilities that other places don’t have,” said John Gardner, UMC public relations manager.

The other that has helped UMC as it negotiated for 2020 is the power of ownership, according to Hunt.

As a result, Lucas Oil has returned and in 2020 the National Auto Sport Association national will return.

“Look for other announcements of returning events in the future,” Hunt said.

In addition to negotiating for the return of major racing events, UMC is opening new non-racing facilities and activities geared toward Tooele County families, according to Jody Niemann, UMC vice president of customer experience.

The former Ford Performance school building is being repurposed into a family fun center, she said.

Expected to open in the spring, the family fun center will feature Nerf gun wars, archery tag, dodgeball and other family-friendly games.

Participatory activities are also expanding. Wide Open Wednesdays — the opportunity for a driver to take their street car on UMC’s track in a non-competitive environment — will be expanded to Saturdays.

UMC has invested in a small fleet of Pitsters — small two wheel motorcycles — and Tuesday’s will become “Two Wheel Tuesday” at the Kart Center.

One of the most frequently asked questions UMC gets is about a future oval race track and a drag strip.

“We need to first show our owners that we can turn a profit with what we have, before we can talk about investing in new facilities,” Gardner said.

A partner might help move up the timeline for new facilities, according to Hunt.

“If we had the right partner we might be able to look at that kind of expnasion earlier,” he said.

When Rodizio Grill departed from UMC last year, UMC officials announced they were going a different direction with food services.

UMC is now announcing that new direction, with the help of a partner.

“We are joining forces with Spiros Makris, owner of Jim’s Diner in Tooele, to create our own catering company,” Hunt said. “We will cater our own events and offer catering services to the community off-site too.”

Hunt bills UMC as the largest outdoor venue in the state, and it’s not just motorized events, he said.

Non-motorized events for 2020 include an Easter Egg Hunt on April 4, two visits from Night Lights on May 16 and Aug. 22, and the second annual Twinkle Drive holiday festival in December.

In addition, UMC’s two popular car shows will return, the Fourth Annual Cruzer Palooza on May 23 and the Import Spring Showoff on June 13.

Gardner pointed out that all amatuer racing events are open to the public free of admission, including no parking fee.

UMC is also becoming a center for corporate and family events, according to Hunt.

“Whether it’s a corporate party or training, or a family reunion, wedding, or reception, we have a place and activities for you,” he said.