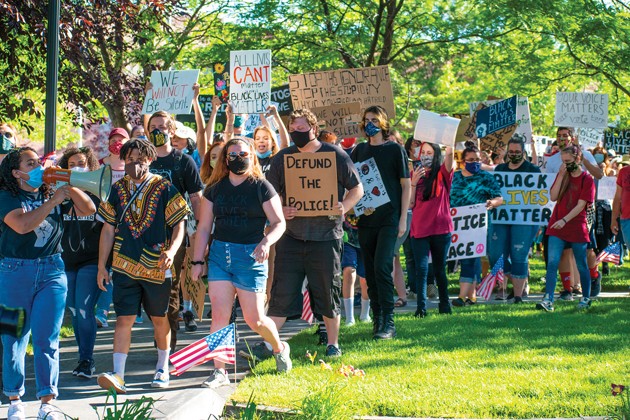 In June, Tooele County residents marched in protest against police brutality stemming from the death of George Floyd, a 46-year-old African-American man who died on May 25 after being handcuffed and pinned to the ground by a white police officer’s knee.

Alexia Blake, who grew up in Tooele and still lived there, made her dream of a peaceful march for black lives and justice in her own community come true.

Blake, along with some friends, organized a “Black Lives Matter” peaceful protest and march that was held in downtown Tooele City on Friday, June 26.

The march was organized by Tooele County residents, and had no affiliation with any official Black Lives Matter organization, according to Blake.

The Tooele County Republican Party then held an event at the park featuring various speakers at 7:30 p.m. It ended with an 8 minute and 46 second moment of silence, with most participants on one knee.

As 6 p.m. approached, around 200 people gathered in the Veteran’s Memorial Park. Not all were there to participate in the march.

In response to rumors that either the protesters themselves or outside agitators had plans to vandalize statues and memorials, a group of what some protesters called “counter-protesters” or “protectors” stood in front of the statues and monuments, silently. Most of them had their arms folded.

The two groups did not exchange words and a peaceful protest ensued.