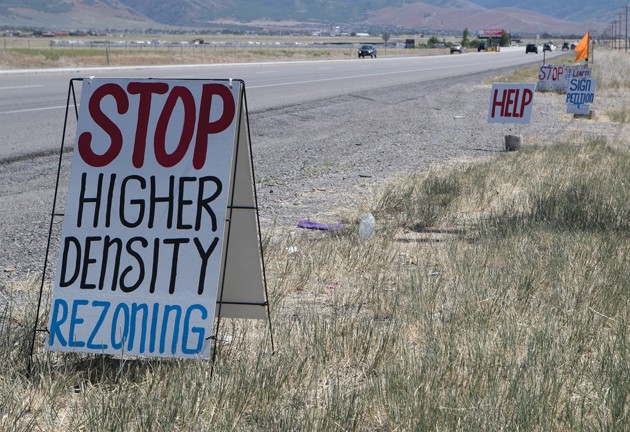 Signs on state Route 36 promoted an opportunity to sign the petition for the referendum that would repeal the rezone for the Temple Subdivision.

The undoing of the rezone for two development projects in Tooele County at the polls in November 2020 had their origins in a movement that started in Erda in 2018.

As 2018 drew to a close, the Tooele County Clerk Marilyn Gillette was verifying signatures on six referendum petitions for developments approved for Erda that would put those land use decisions by the Tooele County Commission on a ballot.

One of the petitions was for the Skywalk development, a 246-acre planned unit development south of state Route 138 and west of the Tooele Valley Airport.

Three of petitions that were circulated in late 2018 were for three zone changes involving one developer for different properties in Erda. The petitions were declared moot after the County Commission rescinded the three rezones in a Dec. 27, 2018, meeting at the request of the developer.

That left two petitions that were validated by the County Clerk as having enough valid signatures and were for referendums for legislative decisions.

One petition would overturn the rezone for Shoshone Village, a 119 acre project near Bargain Buggys on state Route 36. The property was rezoned from RR-5, which allows one home per five acres, to R-1-12, which would allow up to up to three single family homes per acre

The second petition was for Adobe Rock Ranch, a 1,444 planned community in Lake Point with a mix of retail, commercial, and residential uses with parks,trails, and open space.

The Shoshone Village petition became proposition 1 on the Nov. 2020 ballot. A total of 68% of the voters voted against the rezone for Shoshone Village. The property has now been returned to its original RR-5 zone.

The Adobe Rock Ranch petition became ballot proposition 2. The rezone for Adobe Rock Ranch was rejected by 70% of the voters. The property involved has now reverted to its original zone designations.

After the County Commission rezoned the 246-acre Skywalk development to a planned community in 2020 — a legislative action — once again Erda residents collected signatures on a petition to support a referendum to put that decision on a ballot, where voters could possibly overturn it.

Erda residents also sprung into action in March 2020, when the Church of Jesus Christ of Latter-day Saints revealed plans for their temple and a residential subdivision to be built on 167 acres of land they own northwest of Erda Way and state Route 36.

The concept plan for the subdivision showed a total of 447 housing units on the property. That made the gross density of the development 2.67 housing units per acre. Lot size ranges from half-acre to less than 4,500-square-feet.

The County Commission granted the Church’s request to rezone the full 167 acres from RR-5 to a planned community zone.

Expressing concern with the density of the residential development, some Erda residents sponsored a referendum to put the rezone on a ballot.

Sponsors were told they needed to collect 2,445 signatures. They gathered 3,636 signatures, with 2,976 that were verified by the County Clerk.

The County Clerk declared that the petition failed.

The referendum sponsors filed a complaint in the 3rd District Court claiming the county clerk was overzealous in disqualifying signatures.

Before a court hearing was held, the signatures were “recounted” by a local election judge and a deputy county attorney. By their count, the petition was successful.

But, before the end of gathering signatures for the referendum, the Church released a statement attributed to the First Presidency of the Church of Jesus Christ of Latter-day Saints, that read, in part, “Therefore, regardless of the outcome of a pending signature-gathering effort, we have determined to withdraw our rezoning request for the residential portion of the temple project.”

In December, the Tooele County Commission approved a resolution returning the entire 167 acres to the RR-5 zone.