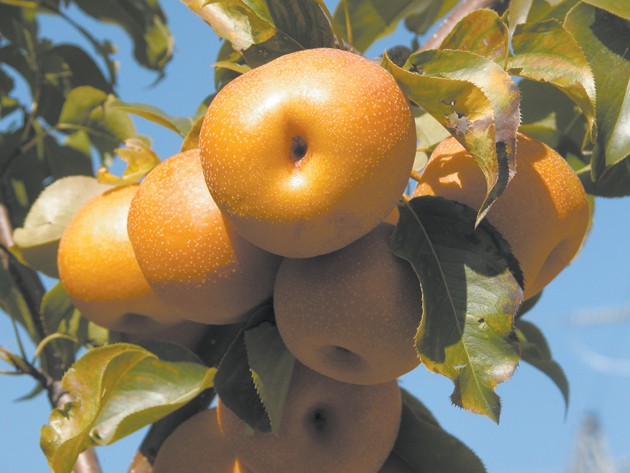 Asian pears are a dieter’s delight. They taste like a dessert, but they’re low in calories and high in vitamins.

Asian Pears, also called Nashi apple, Chinese, Japanese and Oriental pears, are a less common dessert pear but they are rapidly gaining in popularity. Most of us don’t have a tree for these tasty fruit treats in our backyards, but you can find the fruit currently at local grocery stores. It is typically available from July through late October.

Ripe fruit will have a fairly strong and sweet aroma (they won’t smell as strong if they are cold than those at room temperature.  Avoid those that have soft, wrinkled appearance or with numerous scuff marks or bruises.

They are a dieter’s delight. They are so sweet, they taste like a dessert, but on average one pear will provide only 61 calories and considerable amounts of vitamins A and C.

Although they can be frozen or bottled and still maintain good quality, you may not have a large enough supply to consider such an option. Eat them like a fresh apple or put them into various dishes to enjoy them.

Mix together or layer the spinach, pears and nuts, then top with dressing.

20 seedless red grapes or more (Cut in half if large)

Mayonnaise or Miracle Whip to taste

Mix ingredients together and serve.

4 to 6 slices of bread (remove crusts) (Any kind will work, but avoid those with strong flavors like pumpernickel.

1/4 cup heavy or light cream or half and half

Fit bread in a single layer on the bottom of the pan. Break up if necessary to fit it together.

Pear layer: In a separate bowl, combine 1/3 cup milk and 3 tablespoons of the honey and mix until combined. Add pears and stir.

Combine regular cream cheese (light is too soft and thin), cream and honey in a food processor and process until it is smooth.

Bake at 350 degrees for 20 to 35 minutes. Broil until the topping turns golden (3 to 7 minutes). Serve immediately.