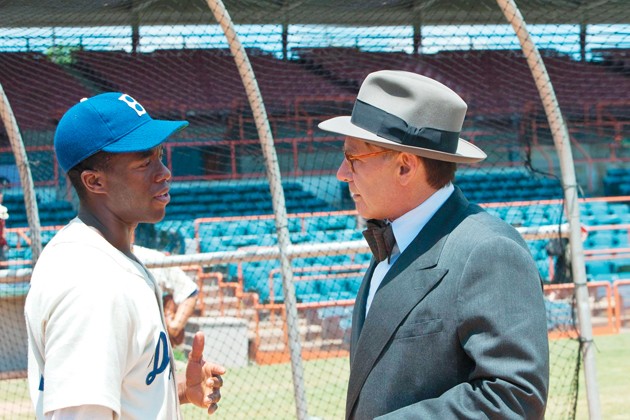 When you make a movie about one of the greatest players of all time in one of the most beloved sports in the nation, you’re going to set yourself up with some pretty high expectations.

Luckily for (and thanks to) writer/director Brian Helgeland, “42” hits it out of the park.

“42” follows Jackie Robinson (Chadwick Boseman) being plucked from the all-black Kansas City Monarchs and placed in the all-white minor-league Montreal Royals through his rookie season with the Brooklyn Dodgers in 1947.

Hand-picked by Royals/Dodgers owner Branch Rickey (Harrison Ford) for his impressive skill on the field and pluck off the baseball diamond, Robinson is selected specifically to break the color barrier.

Rickey’s overt reasons are financial — dollars aren’t black or white; they’re green, he tells his worried staff, and there’s a whole untapped market of black baseball fans ripe for the picking, as well as the benefit of using exceptional black players to help the team win.

In exchange for making him the first black player in minor-league baseball history, and for giving him the unprecedented chance at a shot at the majors, Rickey asks one thing of Robinson — that he not fight back when insults or even punches are thrown his way.

“You want a man who’s not strong enough to fight back?” Robinson asks.

“No,” Ricky replies, “I want a man who’s strong enough not to fight back.”

From the moment he steps onto the ball field, that strength is tested. Coaches, players, reporters and fans (it seems like everyone but Rickey) balk at the idea, but Robinson almost seems to thrive at the challenge. Slowly but surely, his home runs, sure catches and mad base-stealing skills begin to earn him respect among some.

When he signs onto the Dodgers, though, the opposition gets harder. Some players sign a petition vowing not to play with Robinson, though team manager Leo Durocher (Christopher Meloni) quells at least the obvious signs of that dissent.

Other teams resent Robinson’s participation, too, especially Philadelphia manager Ben Chapman (Alan Tudyk) and the pitcher of the Pittsburgh Pirates, who keeps aiming for Robinson’s head. The farther the Dodgers go into the season, and the better they do, too, the more plentiful and serious the death threats become.

Of course, this is not only a sports movie but a biopic, as well, so we all know how it ends. Still, “42” does a good job of making the audience feel mounting pressure against Robinson. Thankfully, such blatant racism is not present in today’s culture, but that also means that “42” has to carefully toe the line of engendering sympathy and providing historical reference without making baseball crowds and players all seem like members of a lynch mob (read: brace yourself for a bunch of racial slurs).

That line is toed well, and for every hateful character there’s a more important and more noble counterpart to offset. Rickey’s financial goals are revealed to also include roots of idealism, and Durocher’s pragmatism spreads to other members of the team, especially Pee Wee Reese (Lucas Black) and Ralph Branca (Hamish Linklater). Off the field, we’re also shown how Robinson’s efforts make changes to the fans and to reporters, including Wendell Smith (Andre Holland), the first black reporter to be inducted into the Baseball Writers Association of America, and legendary radio broadcaster Red Barber (a great John C. McGinley).

The acting is near-faultless throughout, including by newcomer Boseman, and Ford, whose role was reportedly originally intended for Robert Redford. Cinematically, the series of baseball games are kept fresh by some really cool camera angles, including one where the shot follows Robinson running at ground level. And although it’s 122 minutes, it never feels long. In short, it hits a home run on all counts.

“42” may be a movie about baseball, but what it actually is has much more to do with strength, passion, courage, perseverance and the acceptance of greatness than it does about America’s pastime. It’s a movie about a sport and a great player of that sport, but its real nature is far deeper and much more widely accessible than that.

You don’t need to care about baseball or know much about Jackie Robinson to enjoy or benefit from this movie. Baseball is shown more as the vehicle Robinson used to bring about change, but that right there might make baseball seem a little more great.

Robinson shattered the color barrier along with all those baseball records, and it would be trite to say a film could adequately summarize the effect he has had on the game, national athletics in general, and cultural acceptance on a national and even global level. Still, “42” comes as close as it can to doing Jackie Robinson justice.