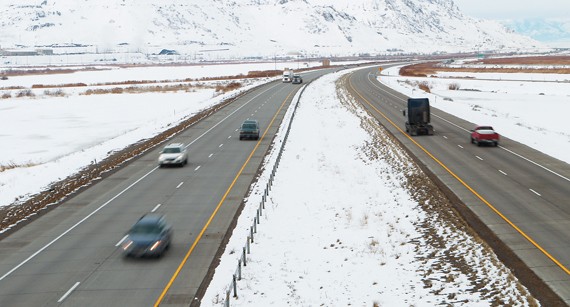 Cars move along I-80 eastbound Tuesday morning near Saltair. If House Bill 83 passes, a portion of I-80 between Grantsville and Wendover can have a new speed limit of 80 miles per hour.

HB 83 is moving quickly through Legislature; next step is a senate vote ♦

Some portions of Tooele County’s share of I-80 may see faster speeds if a rapidly moving bill in the Utah Legislature is passed.

The bill’s chief sponsor, Rep. James A Dunnigan, R-District 39, said his push for the bill is the result of four years of research on a portion of I-15 in southern and central Utah. Certain areas of the interstate in those areas have been posted at 80 miles per hour since 2008, he said, and the results have been encouraging.

Before the speeds were raised, the prevailing speed — that is, the speed traveled by most vehicles in the studied stretch — was 82 miles per hour, which is seven miles per hour faster than the posted limit of 75, he said.

After the speed in those areas was raised to 80 miles per hour, the prevailing speed was 83 miles per hour. The frequency of crashes did not increase, he said, and in two of the four studied stretches it even decreased.

“They [drivers] didn’t even increase their speed five miles per hour, only one to two miles per hour. We have four years of data,” he said. “I’ve had numerous people ask, Why don’t you look at other places to raise the limit?”

Dunnigan said the four years of data also suggest the economic impact from a likely drop in issued speeding tickets would not be large enough to add consideration to the bill. Additionally, the speed limit would only be raised in long, flat areas with good visibility and not an unusually high rate of accidents, he said.

“The loss of revenue has been negligible. It doesn’t show up on the financial or fiscal impact at all,” he said. “It doesn’t have a major impact, and we haven’t posted areas where there are a lot of mountains or curves, where there would be limited visibility or difficult terrain.”

The bill passed the House of Representatives committee unanimously, and got a 65-5-1 vote in the House last Wednesday. It has since received a favorable recommendation from the Senate committee and will next go before the Senate for a vote.

Dunnigal said if it did pass, studies would be conducted to decide the best places along I-80 in Tooele County, as well as north of Tremonton to the Utah-Idaho border of I-15, to post the increased speed limit. New signs would likely not be posted until July. Although the fate of his bill is still undecided, Dunnigal said he has so far heard favorable remarks about it.

“I think the response and reaction is very positive toward it. And part of it is we’ve been very measured in our approach. We have four years of data,” he said. “We’ve seen what people do with the increased speed limit, and it isn’t much — we just have more people complying with the speed limit now.”