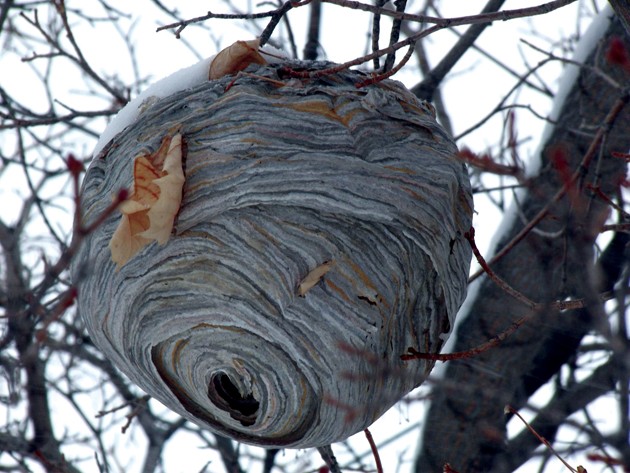 A bald-faced hornet nest sits empty in a tree towards the top of Middle Canyon.

Coming from the family of Vespidae and the order of Hymenoptera, relating to ants, bees, wasps, and sawflies, bald-faced hornets are known for their exceedingly large nests. They are built to rear a colony of numerous offspring for one season, after which the nest is abandoned and never reused by these wasps. Other insects and spiders will sometimes occupy these nests during the winter.

Bald-faced hornet nests are grey pear-shaped structures with a single entryway near the bottom. Though the nest pictured with this column is abandoned, it was once occupied by a colony during a recent summer. Bald-faced hornet nests can be built to exceed the size of basketballs, and a single colony can consist of up to 400 to 700 hornets.

During the spring, the construction of one nest begins by a single queen born from the previous season. After emerging from her winterized hiding spot, the queen then builds a nest with a mixture of saliva and chewed wood, most times concealing it within tree branches, leaves, and shrubbery.

The queen first makes the nest only large enough to hold a single batch of eggs; once they hatch, larvae are reared and are brought a variety of insects, chewed into bite-sized bits. After maturing and reaching adulthood, the larvae become workers and provide further nest construction, larvae care and other various tasks. The queen is left only to lay more eggs and rapidly build the colony.

Bald-faced hornet colonies only last for one season, and the entire nest of workers and the queen are eventually killed off by winter. Before then, during the early autumn, the queen will begin laying eggs of queens and drones. Once these eggs mature, the new queens mate with the drones, then venture off to winterize by hiding underground or inside hollowed logs and trees. Only the newly lain queens survive the winter, and will repeat their species’ cycle the next spring.