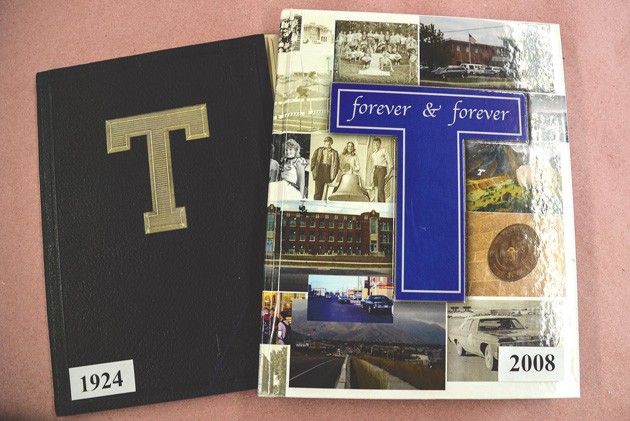 “Forever and Forever in Tooele.” Pictured are Tooele High Yearbooks from 1924 and 2008. The earliest and latest copies of THS yearbooks in the James L. Bevan Tooele Pioneer Museum.

The James L. Bevan Tooele Pioneer Museum located at 50 E. Vine Street in Tooele is quickly becoming a “not to be missed” walk back into history. The museum director and other volunteers have made several intriguing additions to what museum enthusiasts from Tooele County, from Utah, and from out of state and even from foreign countries have referred to as a “hidden gem.” As such, we are looking for Tooeleans everywhere to loan or donate missing high school yearbooks to our collection to historically preserve them and for all to peruse and enjoy. After all, “far away we leave our hearts to stay forever and forever in Tooele” is still embedded in the blood of every THS student past and present. Yearbooks loaned to the museum will be returned to the owner upon request.

While the museum does not need multiple copies of yearbooks already in the collection, there are large chunks of missing yearbooks. As noted in the photo, our oldest yearbook is the 1924 edition. From 1924 to 1944 we are missing all years except 1927, 1929, 1938 and 1940. While not knowing when the first yearbook was printed, any yearbooks except the four years mentioned would be most highly welcomed.

On a lighter note, in the THS theme song the best explanation we can come up with for the word “tiger” as in “here’s a tiger to Tooele High” is a quality that is vigorous, fierce, and formidable. After all these years of not knowing, we think that fits!

The James L. Bevan Tooele Pioneer Museum is open every Friday and Saturday from 10 a.m. to 4 p.m. Additional times can be arranged by calling Museum Director Glen Stevens at 435-882-3168. Come down and see us!