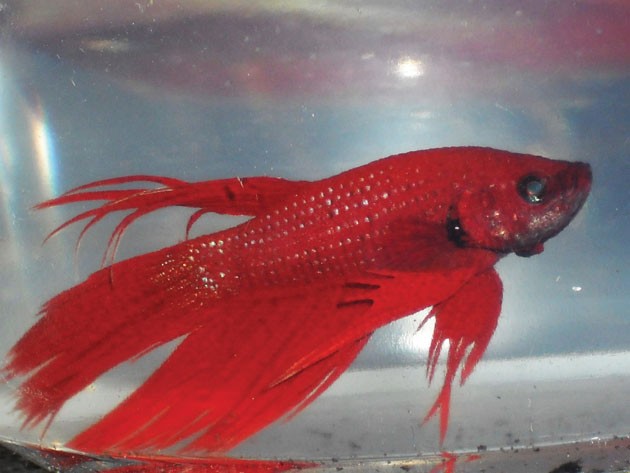 Male beta fish, like the one pictured here, take responsibility for tending to the eggs after mating.

November 12, 2015
A deadly embrace: Male beta fish care for eggs after squeezing them from female

Beta fish possess a different way of reproduction in comparison to other animals. For example, in most cases, the females provide most or all of the parental care for offspring, while the males tend to either leave or assist his mate (depending on the creature). However, for beta fish, it is the males that provide fatherly care.

After copulating inside a saliva-bubble-built nest, males will chase females away and tend to the eggs until they hatch.

Even more odd, the beta’s courtship ritual may not only be deadly to the female, but can even be injurious to one or both mates. When a female beta is placed with a male to be bred, the male will express interest to the potential mate by expanding or puffing out his fins, after which he will begin constructing a nest. When ready to begin the ritual, males will coerce the female near the nest and take hold of her by tightly wrapping his body around her. For some time, males will hold this position until a various amount of eggs are squeezed from the female. It is during this time that the eggs are fertilized. As the male is squeezing the female, he is spawning milt onto them. After enough eggs are extracted, the male leaves to retrieve and place the eggs in the nest while the temporarily paralyzed female tries to recollect herself. After placing the eggs and repeating the squeezing process, the male will continue this ritual until the eggs are all squeezed from the female.

Once the ritual is complete, the male will chase away the female, if she does not leave on her own, in order to protect the eggs. It is a common occurrence for the female beta to successfully devour multiple eggs throughout the spawning process. The male will tend the eggs by cleaning the nest, watching for possible falling eggs and repairing the nest when necessary.