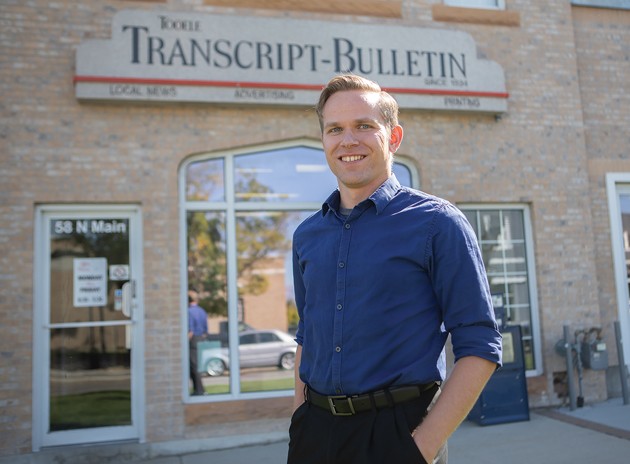 Staff writer Steve Howe leaves the Transcript Bulletin to head home to upstate New York. He will be the city reporter for the Utica Observer-Dispatch.

October 3, 2019
A fond farewell to Tooele County and the Transcript Bulletin

This is the last piece I’ll write — at least for the foreseeable future — for the Tooele Transcript Bulletin.

After nearly five years juggling a variety of beats — Grantsville City, Tooele City, criminal justice and the military — my time at Tooele County’s venerable newspaper has come to an end. I’m returning to New York and a new opportunity as the city reporter for the Utica Observer-Dispatch.

I’ve enjoyed the opportunity to meet so many of Tooele County’s interesting and important people through the newspaper. I’ve covered several impactful events in the county, such as the July 2016 fire in Tooele City and the construction of the Grantsville Justice Center.

Working for the Transcript has been a fulfilling opportunity for me and I’ve felt welcomed by Tooele County, a place I had no idea even existed when I moved to Utah in 2014. I’m all the better for the opportunity to be a part of the fabric of this unique community.

I’m thankful for the help and friendship of my Transcript coworkers past and present, who eased my transition to Tooele County and helped my professional development. I’m a much better writer and reporter than I was at the beginning of my time here.

While my time at the Transcript is at an end, I’m sure my beats and sources are in capable hands with my replacement, Devan Gowans. Look for his articles in the next edition.

My work at the Transcript is just a drop in the deep well of the newspaper’s 125 year history. This community is so lucky to have a newspaper dedicated to reporting the goings-on of its municipal governments, schools and businesses.

As Tooele County has grown and expanded, there have been many growing pains, especially in regards to new development. The Transcript Bulletin will continue to attend municipal meetings, ask tough questions of elected officials and demand accountability of those in power.

In an increasingly internet-focused world, many people cite social media as their source for news. A Pew Research Center survey from August found 71% of U.S. adults use Facebook, with 52% getting their news from the social media site.

Anyone who has spent time on various community Facebook pages know they can be unreliable sources of information, with rampant speculation and wild conspiracies. I’ve spoken with several sources in government and law enforcement who said they have to combat false information generated on social media.

It’s one reason the Transcript Bulletin is crucial to oversight and accountability in Tooele County. We have the ability to cut through the noise and get real responses from those with knowledge of the situation.

Salt Lake media may make a splash when they occasionally send a news crew out to cover a story, but they aren’t at every municipal meeting and frequently don’t know who they should be speaking with. Tooele County is often an afterthought to television stations and newspapers on the other side of the Oquirrh Mountains.

With such a long history in Tooele County, it can be easy to take the Transcript Bulletin’s presence for granted. As one of the oldest businesses in the county, the newspaper has been here as long as anyone can remember.

Across the nation, however, newspaper revenue and circulation have declined. So has the number of newsroom employees. Daily newspaper circulation declined nationwide by an estimated 8% on weekdays, according to a fact sheet from Pew Research Center this July.

In August, the last edition of The Vindicator, the daily newspaper in Youngstown, Ohio, came off the press. After 150 years, the newspaper shut down after years of unprofitability.

In the newsroom, we see the complaints and gripes about the Transcript Bulletin’s paywall. I’m not unsympathetic to wanting access to important local information, but the newspaper’s staff — all dedicated professionals — have to be paid like the employees of any business.

It costs only $40 for an annual subscription to the Transcript, which publishes twice weekly, including online access. While it’s $1 on the newsstand, a subscription cuts the cost to 38 cents per edition, which seems a small price to pay for local news from the various meetings and events you may not be able to attend or to highlight the best Tooele County has to offer.

There will be those who can’t afford the annual fee and I encourage them to read the newspaper at their local library, if possible. We also post one or two articles each week to the Transcript Bulletin’s Facebook page, which are available ahead of the paywall.

It’s been an honor to serve this community and I hope the Transcript Bulletin is able to provide service to Tooele County for years to come. Like any other historic institution, once it’s gone, it’s gone forever.