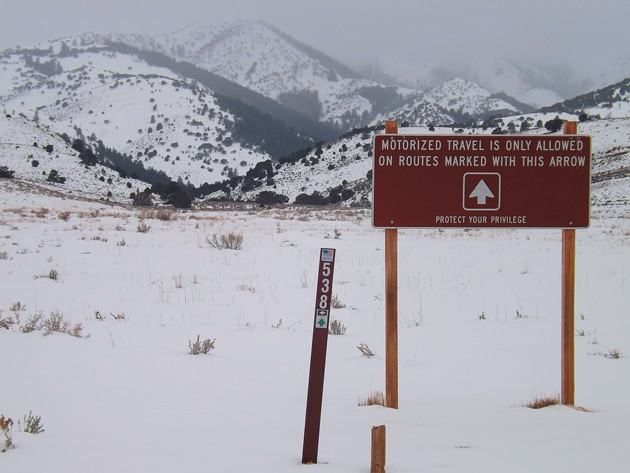 Winter travel can be difficult. The road to Mack Canyon became impassable where the signs are located.

January 28, 2016
A good cup of Douglas fir tea on a snowy night is like a walk through the woods

“We shall draw from the heart of suffering itself, the means of inspiration and survival.”

I did a lot of research and determined that Douglas fir needle tea is safe to drink. But because I’m not a doctor, I wouldn’t recommend it to anyone.

Tooele County has a lot of places where Douglas fir grow. I could have chosen an easier place to get them, but what adventure would that be? Instead, I went to Mack Canyon in the Stansbury Mountains west of Grantsville.

A big January storm was coming and it was already late afternoon, but I enjoy hiking in bad weather and in the dark. So my dog Duke and I headed for the mountains.

The east flank of the northern Stansbury Mountains is a great place to explore, thanks to a gravel road that accesses Magpie, West and Mack canyons. The gravel road is located off of SR-138 on the west side of Grantsville. To reach it, follow SR-138 west through town. At the edge of Grantsville, SR-138 veers right and the gravel road is about one mile ahead. Look for a brown sign on the right side of the road that reads “Mack Canyon.”

Turn left at the sign and follow the gravel road west as it passes a few homes on the left and then climbs the benchland, passing through several gates that have rail ties for posts.

Just after crossing one of the gates near the foot of the mountains, you will see a motorized travel restriction sign that says vehicles must stay on established roads. Here the road becomes U.S. Forest Service road 538.

Due to deep snow, this was as far as I got in my 4X4 on a snowy January evening. Weather permitting, the road goes to the mouth of West Canyon where there is a parking lot.

I parked my vehicle so the front wheels faced downhill to let gravity help me to get out. As Grantsville’s lights twinkled through the frozen haze, I shouldered my pack, released Duke, and we began our trek across the flat towards the mouth of Mack Canyon about a mile away.

I soon discovered this was no level plain. In fact, it was a series of sagebrush flats cut deep by intervening gullies that drained the mountains. It was 4:30 p.m. and getting dark. The snow was about a foot deep, and on the windward lip of the gullies, it was piled 4-8 feet deep in drifts that were difficult to cross. But we struggled our way in and out of three gullies before we reached the first juniper trees. Light snow began to fall and the scene looked like a giant snow globe.

As we climbed each gully, the faint light made it hard to tell where the mountain ended and the sky began. In the junipers the snow was up to the knees. Because of the warm temperatures, the deep snow was “melty,” not quite slush but wet enough to make passage difficult. At nearly 6 p.m., we intersected the snow-buried canyon road in the mouth of Mack Canyon.

Dog and man paused for a moment in the trees and then I heard a hoot. A few more steps and we spooked what appeared to be a Great Horned Owl. It was a breathtaking sight to watch the giant bird swoop away over the trees. It was snowing hard and the going was rough for Duke. I was about to give up finding a Douglas fir, but then I saw one a few draws over. It was meant to be because that was the only tree of its kind in the area; the rest were tucked up higher in the canyon.

Following deer tracks where we could, and breaking trail where we couldn’t, we made our way to the tree. This was not easy because the tree was on a north-facing slope and the snow was deep. Once I reached it, I was pleased to find the tree was sheltered around its base and a large area under the boughs was free of snow. Duke was happy to be out of the deep snow. While he wagged his tail in approval, I threw a small fire together. This was not easy because most vegetation was wet. I found dry, dead twigs within the tree, a few scraps of grass, and had a nice fire going after a little struggle.

It was dark and snowing hard in the canyon, but Duke and I were comfortable under the tree with a fire where snow couldn’t reach us. I got my metal coffee pot out, stripped off some Douglas fir needles, filled the pot about 1/3 full, filled it half way with water, and put the pot on the fire to boil. To keep the fire going, I used pine cones and poor man’s coal — cow pies. These large, dry cow pies burn slow and hot. It may seem disgusting, but I now know why buffalo chips were prized by pioneers crossing the plains.

While the tea brewed, I stepped out from under the  tree and listened to the snow. There was a pale, eerie light on the mountains, possibly from the moon and stars trying to break through the clouds. It was peaceful and quiet.

I went back and checked my tea, which was now at a boil, and strained some off into a tin cup. I smelled it before I took a sip and it was like taking a walk through the woods. It was light yellow and green in color, and when I drank it, it tasted pleasant and refreshing. It wasn’t bitter at all. I have heard that the Indians used parts of the Douglas fir to heal ailments, and it makes sense, given the high vitamin C content. The taste is hard to describe: It is like experiencing the strong, pleasing smell of pine on your taste buds.

I enjoyed another cup, doused the fire and then Duke and I followed our trail out of the mountains. Duke whined a bit and I thought of starving cougar nearby. It was not a happy thought and I unholstered my .45 and carried it until we were clear of the junipers.

I was also worried that our trail was covered and we’d be lost in the whiteout. But because the snow was deep, our trail was still obvious. You run the risk of being overconfident when you think you know the terrain. That is when tragedy can strike. A snowstorm’s whiteout changes everything. Familiar landmarks are lost and if you’re not careful, so are you.

I don’t recommend a night adventure in the mountains during a major winter storm, but the hike to that lone Douglas fir — and the tea I made and enjoyed — I will never forget.