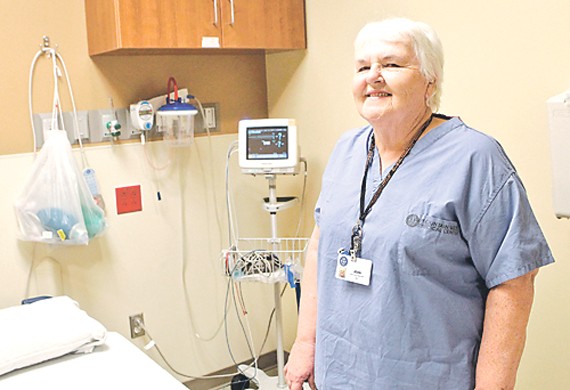 Grantsville resident Jean Brothers can’t remember a time when she didn’t spend several hours a week at the hospital in Tooele over the last 50 years. She’s not a frequent patient, though — she’s a nurse.

Brothers, 69, was born in Vernal, but has lived in Tooele County since 1959. After completing a one-year program to get a diploma as a licensed practical nurse, she began working at the old Tooele hospital in September of 1962.

She worked as an LPN for 30 years — save for a few years between 1969 and 1975 when she occasionally took time off to have and begin to raise her three children — in the emergency room, labor and delivery area and operating room.

In 1992, Brothers earned her registered nurse certification through an outreach program offered by Weber State University at the hospital. She’s continued to work in the operating room area, and now focuses most of her workdays in the recovery area, where patients go after having surgery.

Two years ago, Brothers tried to retire, but found that she missed nursing too much and decided to go to back to work part time.

“My mom said I had always said I wanted to be a nurse,” Brothers said. “As soon as I was finished with school, I become an LPN. I like to take care of people. I missed nursing when I tried to retire.”

Brothers said one of the most important roles she plays as a nurse is making sure her patients are comfortable and pain-free.

“I just like caring for their pain. I don’t like them to be in pain at all,” she said. “Pain control is one of the main roles of nursing in any department.”

Brothers said over the last 50 years, the changes to the hospitals operations, specifically when it comes to the technology and techniques used in surgery, have been astonishing.

“The hospital has changed so much. I’ve seen a lot of changes,” she said. “A lot of equipment that’s come out is very different. All the different, new machinery is the reason why we had to move to a new hospital. We needed room for new equipment. The ER has become a more separate and professional area. As far as working in the OR, I’ve seen a lot of new advanced techniques. Even laparoscopic surgery wasn’t being done much a few years ago. Now it’s done for the majority of surgeries.”

Brothers said when she first started working as a nurse, it was normal for surgery patients or new mothers to stay in the hospital for five days or longer, but now, due to advanced procedures and technology, many patients are able to go home the same day they have surgery.

Brothers said the new technologies have also allowed the hospital to be able to save more people.

“There was a time when you couldn’t save people,” she said. “If they had a heart attack, they either got better or they died. Now that’s so much better. You just don’t see as many people die from heart attacks and things like that.”

Brothers said it’s very hard when one of her patients passes away, but its important to her to remain calm and professional while it’s happening. And for every sad moment she’s had, she said there’s a lot more happy moments.

“After someone passes away, I may take a few minutes to feel bad and talk about it,” she said. “But there are a lot of happy moments for every sad moment. Birth is still a miracle no matter how many times you see a baby born.”

Brothers said she’s probably had thousands of patients over the years, but couldn’t estimate even a ballpark figure of how many she’s seen.

“I do remember one time when I had 13 babies in the nursery at the old hospital,” she said. “Babies don’t go to the nursery now. They go straight to their mom. On a busy day now, they’ll have about eight babies. Sometimes people will tell me, ‘You delivered my baby,’ and I’ll say, ‘I guess I have,’ and then they tell me they now have grandkids.”

When it comes to Brothers’ three children, 10 grandchildren and four great-grandchildren, she said they’re proud of her for continuing to work.

“I think they’re glad I still work,” she said. “They’re proud of me for being a nurse. Besides, it’s easier to work now because I don’t have to worry about where my kids are going or what they’re doing.”

Brothers said she doesn’t have any immediate plans to retire.

“As long as I feel like working, I want to work,” she said. “I’m thinking another three or four more years.”