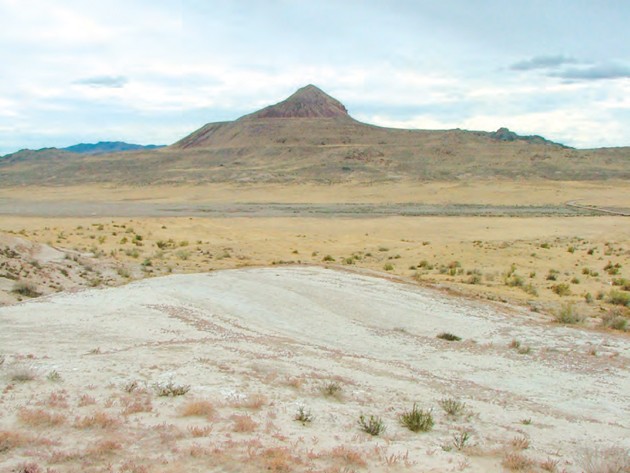 Table Mountain sits in the background near the Pony Express Trail by the Old River Bed from Simpson Springs in Oct. 2006.

March 7, 2013
A morning walk on the desert can be refreshing

There are few things in life that are more amazing to witness than a sunrise on the desert, especially when you witness it from the middle of a vast wilderness.

The dark of the night begins to give way to a lighter hue of blue behind the mountains and if there are clouds, as the sun prepares to rise, they light up in shades of pink and orange. On some occasions, if conditions are right, the clouds will look like molten gold as if on fire. If you get the chance, I recommend driving out on the Pony Express trail in Tooele County before the sun comes up, and witness the show for yourself. I also like to park at a station, say Simpson Springs for instance, and walk from that point to the next station west, which would be the Old River Bed. It is eight miles one way so it may be best to have a vehicle drop you at the start point and pick you up at the end. If you do this you will have a few hours in which to contemplate what it must have been like to ride the Overland Stage or spur your Express Pony along this route while keeping a wary eye out for hostile Indians or thieves. If you decide to walk it, here are some things for you to consider.

Way back in the 1860s the West Desert was a place of mystique, romance and danger. If the desert itself was not bad enough, there were all kinds of scalawags, back stabbers and dry gulchers waiting for a chance or opportunity to gain by taking advantage of emigrants or the careless traveler. There were also Indians out in the desert. Some were Paiute, some were Shoshone, but the most prevalent type of Indian in our desert was the Goshute.

History has been quite cruel to the Goshutes both in written histories of the white man and in the way things worked out. The people who once ruled the desert, or should I say “wandered” the desert, were nearly wiped out by the U.S. Cavalry at Camp Floyd and later Fort Douglas. Other bands of Indians would often times conduct “slave” raids into the Goshute territory, preying upon the weaker, more disorganized band of Indians.

It seems that only a few pioneers back in the day appreciated the Goshutes, took time to study their ways in detail and even learn from them. These men were Henry Jacob “Doc” Faust and Maj. Howard Egan.

Both of these men were tough as nails explorers of the frontier, but they both had a kindly and tolerant view towards Indians and learned their language.

Egan in particular, was well versed in Indian ways and customs as he spent a good deal of time among them. He also had many of them in his employ at his “Home Station” along the Pony Express Trail at Deep Creek.

The book “Pioneering the West,” is a fantastic glimpse back in time to the West Desert of the 1860s. It is the compilation of Egan’s journal and his son’s recollections of their experiences on the desert. Egan describes the Indian ways with a light heart and some excitement and humor mixed in. He goes into great detail about the ingenious ways the Goshutes devised to survive in the wasteland desert.

He also talks about how some of the Indians he came into contact with were capable of incredible physical feats, which brings us to the tale of “Indian No Legs.”

One day back in 1860, Egan was driving his wagon along the Pony Express Trail from Simpson Springs to the Old River Bed along the same route that I described for a morning walk. Egan noticed something bobbing up and down along the road in the distance. He stated that he couldn’t determine what in the world it was, but on the side of the road the strange object left a path in the dust that looked like someone set down a heavy flat bottom basket and then picked it up, moved a ways and set it down again.

Apparently the trail was made by an Indian who had lost both his legs to frostbite when he got caught in a blizzard and the doctor cut them off to save his life.

Egan said he would offer the fellow a ride if he could somehow get on the wagon and stated that the Indian said “Me go alright.” With a few deft moves, he hurled himself up over the wheels and landed in the passenger seat. It seems that the fellow’s band of Indians abandoned him because they couldn’t carry him from place to place on their horses. So when they moved camp, it would take him several days to catch up. He had only a one gallon willow water jug with him and after about 10 miles, he asked Egan to stop the wagon as he needed to get off and head north about five miles. Egan tried to help the Indian down but he managed himself in seconds before Egan could help and then bobbed off into the desert to the north. Imagine crossing that desert one hop of your arms, propelling your torso, at a time!

If you do decide to walk from one station to another in the desert, make sure you have plenty of water and that you’re not alone. It will be an experience you will never forget. It will also be a great relief once you reach your pace vehicle at the end of the station.

As you walk along, think about Indian No Legs and the echoes of the Pony Express and Overland Stage. Sure, the world has changed a lot since then, but the incredible desert sunrise remains the same and it’s just waiting for you to experience it.