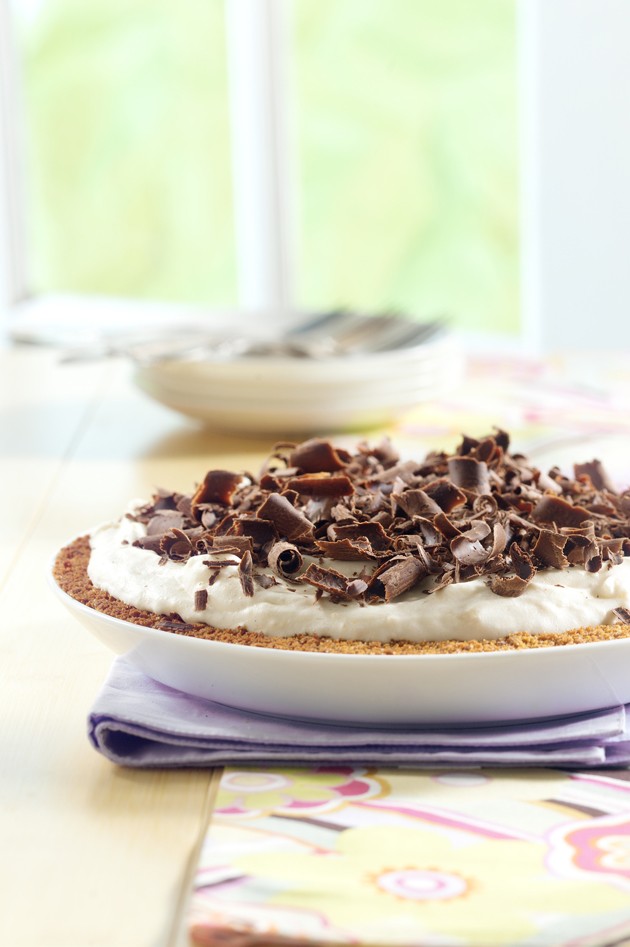 Brandy Alexander Pie is a dessert that never lets you down. The soup may not be piping hot, the roast overcooked, and the salad dressing heavy on Dijon, but when everyone gets up from the table, the only thing they remember is the pie. You’ll be asked how you got the filling so billowy, the crust so crisp, and the chocolate curls so perfect. It’s that kind of recipe.

The pie is named for Brandy Alexander, a cocktail with a fuzzy history, which was created almost a hundred years ago. In 1930, the drink made its debut in print in a book by Harry Craddock, a bartender at the Savoy Hotel in London who was a master at mixing cocktails. Originally made with gin and called an Alexander, this sweet and creamy concoction was popular with women. Some people called it a “girl drink.” Possibly because it tasted more like a milkshake than a real drink, it was listed as one of the 10 worst cocktails by Esquire magazine in 1934.

But Brandy Alexander Pie is another story. It was probably first made in the early 1930s when Prohibition was lifted and people could resume adding liqueurs to their cooking. Although the ingredients in the cocktail and the pie are similar—brandy, creme de cacao and cream—the end products are completely different. In the hands of even a novice pie maker, they are transformed into a mousse-like filling lightened with whipped cream and flavored with exactly the right amount of liqueur. We have seen versions with everything from Irish whisky to creme de banana, but the one with creme de cacao and brandy is the pie we love.
Brandy Alexander Pie

A few things to keep in mind when making the filling: cook the egg yolk mixture slowly over low heat. It can take as long as 10 minutes and should thicken without coming to a boil. When the gelatin custard cools and starts to thicken and before the mixture sets, work quickly to fold in the beaten whites and whipped cream.

2. Combine all crust ingredients in a 9-inch pie plate. Press evenly on bottom and sides of pan. Bake 8 minutes or until edge is lightly browned. Cool on a wire rack.

3. To prepare filling, in a medium bowl, whisk egg yolks and 1/3 cup sugar until thick.

4. Pour water in a heavy saucepan; sprinkle gelatin over top. Add yolk mixture. Cook over low heat, stirring with a wooden spoon, 10 minutes, or until mixture is slightly thickened and coats a spoon. Do not boil. Remove from heat, stir in creme de cocoa and brandy and pour into a very large bowl. Let cool 10 minutes, whisking occasionally, until mixture starts to mound slightly.

5. Beat egg whites until foamy. Gradually beat in remaining 1/3 cup sugar and beat until stiff but not dry. Fold egg whites and whipped cream into custard and turn into crust. Refrigerate 6 hours to overnight. If desired, decorate pie with chocolate curls. Serves 8.

Look for Relish magazine, celebrating America’s love of food, each month in the Tooele Transcript Bulletin. For more Relish recipes and to sign up for our newsletters, log on to relish.com. To download our new free app and subscribe to Relish tablet editions and our free mobile app, Relish Daily Dish, go to relish.com/mobile