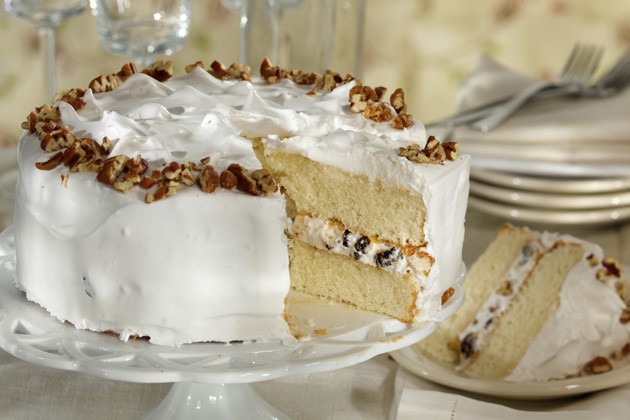 Lady Baltimore, the 1906 novel by Owen Wister, might not ring a bell, but you may have heard of the cake that’s described in the story. It’s a real Southern belle of a layer cake, sandwiched together with a creamy filling that’s filled with figs, raisins and pecans, and covered with a thick coating of seven-minute frosting.

According to food historians, the original Lady Baltimore Cake was probably made in Charleston, S.C., by a woman named Alicia Rhett Mayberry. Mayberry gave the cake to Wister, who liked it so much that he wrote about it in his book. In the story, a man enters a tearoom and orders a cake called Lady Baltimore for his wedding. Another customer asks the waitress to bring him a piece of the cake, and he is so taken with it, he writes, “It’s all soft, and it’s in layers, and it has nuts—but I can’t write any more about it; my mouth waters too much.” That was all readers had to know. Lady Baltimore Cake became an instant hit, and everyone was baking it.

Like many Southern desserts, Lady Baltimore Cake is very sweet. Related to Lane Cake or Silver Cake, the batter is made with egg whites, and the layers are pristine white. For the filling, part of the seven-minute frosting is mixed with dried fruits and nuts, and the rest is spread over the cake. Lord Baltimore Cake, which also has an uncertain history, is made with egg yolks, but instead of fruit and pecans, the filling has crumbled macaroons, candied cherries and nuts. They are both showstoppers.

To get a head start on the cake, bake the layers a day ahead, wrap in foil and store overnight at room temperature. Another option is to freeze the layers. In either case, make the frosting and assemble the cake the day you serve it. The frosting becomes crisp upon standing and provides a crunchy contrast to the tender cake and creamy filling. Contrary to this frosting’s name, you may need to beat the egg whites for up to 12 minutes to form stiff peaks.

3. In another bowl beat egg whites until foamy. Gradually add remaining 1/3 cup sugar and beat until nearly stiff peaks form. Stir about one-third of whites into batter; fold in remaining whites. Pour into prepared pans. Bake 25 minutes or until a tester inserted in center comes out clean. Cool in pans on wire racks for 10 minutes.  Remove from pans, peel off wax paper and cool completely on racks.

4. To prepare frosting, in the top of a double boiler or in a large bowl that fits over a pot, combine sugar, cream of tartar, egg whites and water. Set over simmering water and beat with an electric hand mixer until stiff peaks form, 7 to 12 minutes. Remove from heat, add vanilla and beat 1 minute or until thick enough to spread.

5. To prepare filling, place 1 1/2 cups frosting in a separate bowl and blend in almond extract, raisins, pecans and figs.

6. Place one layer bottom side up on plate and top with fruit and nut filling. Cover with remaining cake layer, top side up. Frost sides and top of cake with remaining frosting. Sprinkle pecans around top edge of cake.

Look for Relish magazine, celebrating America’s love of food, each month in Tooele Transcript-Bulletin. For more Relish recipes, to sign up for our newsletters or to leave a note on our message boards, log on to relish.com