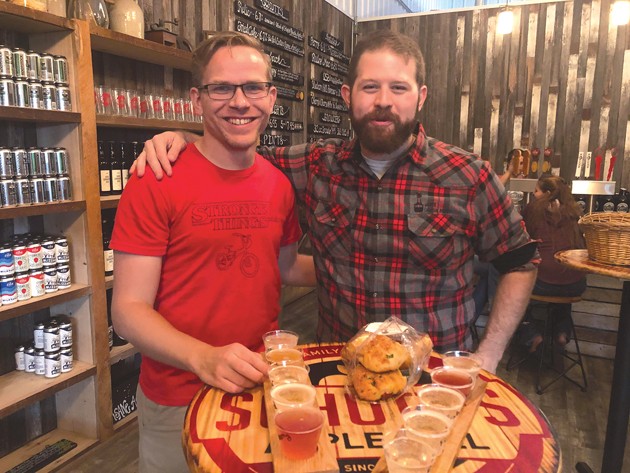 The author (left) made a quick trip to New York last weekend for his best friend Cody’s birthday. (Courtesy of Emily Woods)

At the end of July, I got a message from my best friend’s wife.

“I want to surprise Cody for his birthday — are you free during the first week of September at all?”

After several weeks of putting together the logistics of a quick weekend trip back to Rochester, New York, I was set up with an overnight flight and return flight, with assurances to editor Tim Gillie I would still be producing copy while out of town. Emily had gone above and beyond to make it a possibility and I was excited to see Cody for his 29th birthday.

As most of my trips back to New York usually are, this one was multi-purpose as I had some errands to run while Cody and Emily were at work on Friday. I grabbed my rental car and after four hours of driving and time to complete my tasks, I was expected to arrive back to the airport to drop off the rental so I could surprise Cody.

Then I ran into a problem all-too familiar to Tooele County residents — there was a traffic accident on the main route back and no easy alternative. So I was stuck in stop-and-go traffic as the clock ticked on in the background.

By the time the rental was gassed up and dropped off at the airport, I was 40 minutes later than anticipated. Emily, excited for the surprise she’d coordinated, had arrived promptly when I’d hoped to be there, I would later find.

So while I was trapped on the interstate, Emily was trying to figure out ways to kill time near the airport. Cody immediately assumed they were going to pick me up when they arrived at the airport, then was confused when she started to drive all over the place with vague explanations.

They stopped at a diner with good online reviews but the food wasn’t great and Cody wanted to leave. So they just kept driving around, with Cody becoming more agitated and Emily more at a loss for what to do about it.

When they finally arrived back at the airport to pick me up, the surprise was all but ruined, though Cody was still happy to see me. He said he wondered if hell was being driven around the area of an airport with no explanation for what was happening.

Once the initial hiccup was out of the way, we had a really nice evening and weekend. Upstate New York is just about perfect in September, with warm temperatures, crisp air and plenty of fall activities. One stop we made was to a local farm with alcoholic and non-alcoholic cider, cider doughnuts and fresh-baked pies.

We also had the chance to watch a cyclocross race featuring elite-level cyclists and had a rain-shortened bonfire with Cody and Emily’s friends, who announced they were getting engaged. While it may have stumbled out of the gate, it turned out to be a really nice weekend with great friends, food and drink.

Not that I would have expected anything less. Cody and I have been friends since fourth grade and attended college together, so we’ve been close for 20 years now.

He’s always been someone I can trust absolutely and who I know will always have my back, no matter what. I liked to think he knows I’m always there from him, too.

Swinging back to New York for Cody’s birthday was the second birthday related trip I’ve made this year, after a week to see my sister for her 30th. It’s been fun to be there for people I care about on a special day for them and I’ve been lucky to have the experience.

As time goes by, those special moments seem to have extra meaning as time and distance threaten to push all of us from those we care about. I really feel how valuable it is to have those moments, especially with older relatives and long-time friends with lives, careers and families of their own.

So if you get the chance, give your parent, sibling or friend at least a call. You’ll never regret it.