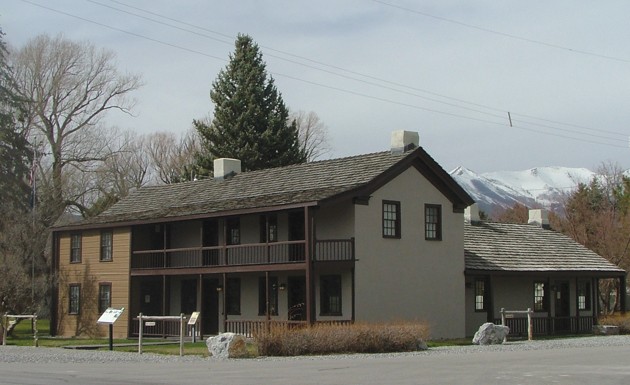 Whenever I embark on an exploration of the Pony Express Trail in Utah’s West Desert, the adventure always starts at Camp Floyd State Park in Fairfield.

Back in 1860, Camp Floyd was reportedly the largest military post in the U.S. with one-third of the standing Army sent west to Utah Territory to ensure the Mormons would remain loyal to the nation. At least that was the official story.

As with any adventure of this magnitude, politics were front and center. Secretary of War John B. Floyd, for whom the garrison was named, was accused of sending large amounts of arms to southern states in anticipation of the Civil War. This makes me think sending such a large federal force west may have been partly due to a desire to keep troops far away from Washington, D.C., as the country headed towards secession of the southern states.

Whatever the reason, Camp Floyd was a miserable place and the officers and soldiers of the U.S. Army weren’t happy there. Capt. Lafayette McLaws noted in his journal that morale was a major issue: “Camp Floyd disagreeable. Men deserting, Mormons aid them. No pleasure for men. Haven’t been paid for 6-8 months.”

Imagine staying on your job for eight months without receiving a check! It is amazing that any of them stayed.  McLaws continued: “Weather cold and snow. Passes blocked by snow. No leaves granted. Troops have no effect on Mormonism.”

By April 27, 1859, his entry read “Camp Floyd dust horrible — all hate the place.” You have to feel sorry for these men who came out to the desert without a mission or pay. They were promised action but their leadership and guerilla tactics were outwitted by the Mormons at every turn as they approached Salt Lake City and spent a horrible winter on the Wyoming plains at Fort Bridger.

Due to excellent negotiations by several key military personnel sympathetic to the Mormon cause, hostilities were avoided and Commander Col. Sydney Albert Johnston agreed to locate his army 40 miles away from Salt Lake City at Camp Floyd.

Only a shadow of the camp is there today. The original commissary building serves as a small museum and bookstore dedicated to telling the story of Camp Floyd and the Utah War.

State Route 73 passes right through the center of the old camp footprint. Where you turn into the park from SR-73 is where the 5th Infantry’s quarters stood, which would have been either adobe huts or white sibley tents.

Imagine all the activity that must have gone on there. The 2,900 soldiers spawned a characteristic boom town called “Frogtown” with gamblers, prostitutes, highwaymen, thieves, freighters, saloon keepers and all manner of deplorables looking to make a quick buck while drinking copious amounts of “Valley Tan,” the nasty, locally produced liquor.

The total population of the garrison and Frogtown was more than 7,000 people. This settlement was at the end of the line as far as civilization was concerned. Beyond the camp was the Great American Desert, which was so fearsome and famous that it attracted great explorers and writers like Sir Richard Burton, Mark Twain and Horace Greeley, who all traveled across the Pony Express Trail west of Camp Floyd.

Since the military had no combat task against the Mormons, Col. Johnston had to keep his men busy, so he put them to work exploring and mapping the desert; escorting and protecting the stagecoach, Pony Express riders, stations and other property along the line; escorting the endless freighting trains of Russell, Majors & Waddell who kept the camp well supplied; and endless drill and ceremony that created giant dust clouds the soldiers unaffectionately called “Johnsoons.”

The soldiers were also busied tending to thousands of livestock that supplied the camp. This was no simple task considering the Army had 19,800 mules there alone! Capt. McLaws noted in his journal the animals had to be moved often because there was no good range for them to feed near the camp.

To me, the state park’s most interesting feature is the old Stagecoach Inn, which is across the street from the commissary. This old two-story structure was built by Mormon pioneer John Carson in 1858. Pay the small fee across the street and you can walk through this creaky old building and step back in time; it is filled with furnishings from the Old West.

As you walk up the tight spiral stairs and hear the wood creak with each footfall, consider how Col. Sydney Albert Johnston and many of the other famous Generals from the Civil War may have climbed these same stairs. It is said Porter Rockwell and “Wild Bill” Hickman also stayed in the building a time or two.

On the second floor there are still several holes in the wall where a negligent guest discharged their firearm and sent the shot clean through a bedroom. From the same room you can look out the window at a giant ancient cottonwood, its trunk the largest I have ever seen. I call it the “witness” tree because it must have been around back in the day of Camp Floyd and Frogtown.

Camp Floyd came to an abrupt end when the Civil War began. Orders were given for the troops to return east at once. Due to the rushed departure, there was no possible way the Army could take all of its stores and equipment, so it auctioned off quartermaster supplies for pennies on the dollar. Military provisions that could be used for war were destroyed or buried.

The Army literally split in half as it left, with part going to join the Union and the other to the Confederacy. Men who had served together as brothers at Camp Floyd were now destined to oppose each other in battle. John Buford and Henry Heth were captains and friends in the Utah Desert in 1860, but three years later they met again as Brig. Gen. John Buford’s Calvary engaged Gen. Henry Heth’s infantry column on Seminary Ridge at Gettysburg, Pennsylvania.

While walking the grounds of Camp Floyd in the pleasant country silence, I like to consider the great men, adventurers, common and uncommon outlaws and salty pioneers who carved out an existence in this corner of the desert if only for a short time. I think about the excitement of the Pony Express rider arriving at the Stagecoach Inn to great fanfare and of Army officers drinking coffee and smoking cigars on the porch. It’s all a distant echo so far gone that there are none left who have the memories. However, if you do some research, you can reconnect with the past and make visits to places like Camp Floyd much more enjoyable.

As we continue across the desert from Camp Floyd in this series on the Pony Express Trail, the post will be mentioned often because its soldiers played a central role in establishing the route and keeping it safe from Indians who wanted no part of white man’s trespassing ways.

In next week’s article, we will wrap up a few last thoughts on Camp Floyd, discuss preparations and cautions that are necessary to heed even today, and then head west towards Rush Valley Station.

To get to Camp Floyd from Tooele, head south on State Route 36 past Stockton to the junction with State Route 73. Turn left on SR-73 and follow it around the end of the Oquirrh Mountains and then east into Cedar Valley and you will arrive at Camp Floyd. Distance is about 32 miles.

For more information on Camp Floyd visit its website at stateparks.utah.gov/parks/camp-floyd/.