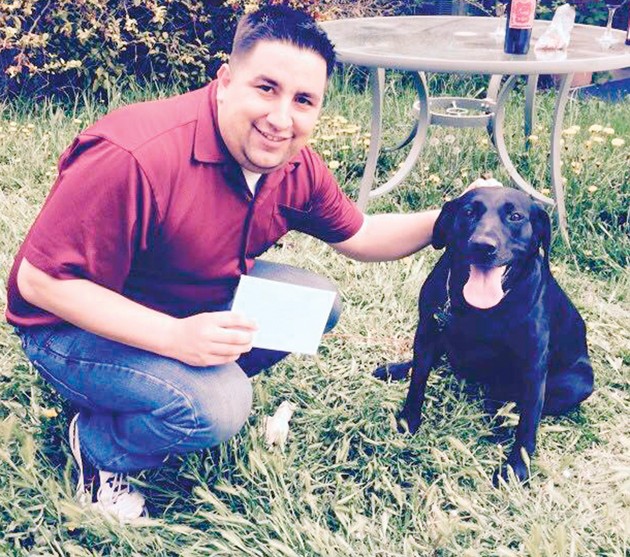 Darren Vaughan is thinking of getting a dog of his own, thanks to his friend’s black Lab, Abbie, who was all too happy to receive a get-well card after a recent trip to the veterinarian.

It only took me 31 years, but I’ve finally found the girl I’ve been looking for.

She’s very affectionate, though she does tend to drool.

She’s got a cold wet nose and her tail might just be a lethal weapon.

See, this girl is a dog. A black Labrador retriever. Goes by the name of Abbie. Or Abigail Louise, if you want to be more formal.

Abbie belongs to my good friend, Brittany, though it could be argued that it’s really the other way around. She has restored my faith in all things dog, and is slowly convincing me that maybe I need a canine companion.

And since Brittany likely would frown upon me “borrowing” (read: dognapping) her beloved floppy-eared friend, that means trying to find a pup to call my own.

It’s not that I’ve never had a dog of my own. When I was a freshman in high school way back around the turn of the millennium, I found myself as the owner of a yellow Lab/chow mix. I named him Max, in honor of his resemblance to the dog from the cartoon version of “How the Grinch Stole Christmas.”

But my Max wasn’t the easiest dog to handle. He had a temper, would bark incessantly at passers-by and if you came anywhere near his food dish, you’d better be prepared to lose a finger or two. Sure, his Lab side came out sometimes and he could be a good companion, but too often, his temper would get the best of him and he’d do something that would leave you shaking your head or screaming in pain.

When he passed away shortly after I graduated from college, I figured I would never own another dog again.

But now that I’m older and have been introduced to Abbie, there is hope.

Max’s biggest downfall was his temper and his tendency to bite the hand that fed him, or the hand that inadvertently touched him while he was sleeping. Abbie’s? The tendency to lick me in the face while I’m driving. Or while I’m eating. Or when I’m trying to carry on a conversation. Or …

OK, so she’s a little bit affectionate. But I can live with that. She is evidence of what a good companion a dog can be. In Brittany’s eyes, Abbie’s not merely a pet — she’s family. As someone who lives alone, perhaps that kind of companion is just what I need.

I find myself perusing the online classifieds regularly, trying to find the right little fuzzball that I can mold into man’s best friend. I think I’d even be willing to give another yellow Lab a try, though perhaps without the chow mixed in. I would love to have someone to hike with; someone to throw a tennis ball to; someone to come home to after a long day. You know, someone with simple pleasures in life — and it doesn’t get any simpler than a rawhide bone and a full bowl of Kibbles ‘n’ Bits.

The biggest limitation is that I currently live in a one-bedroom apartment with limited open space nearby. One of my neighbors is the owner of an Australian shepherd, and that dog looks flat-out miserable every time I see it walk out of that apartment and into the back seat of his owner’s compact car. I couldn’t do that to an animal that’s all about being active.

But my lease is up in November, so you never know what might happen.

I just think it would be nice to have a friend for when times get ruff — I mean, rough.

Vaughan is the community news editor for the Transcript Bulletin. He also would like a dog to help fend off the neighborhood stray cats that meow outside his window late at night. Email him at dvaughan@tooeletranscript.com.