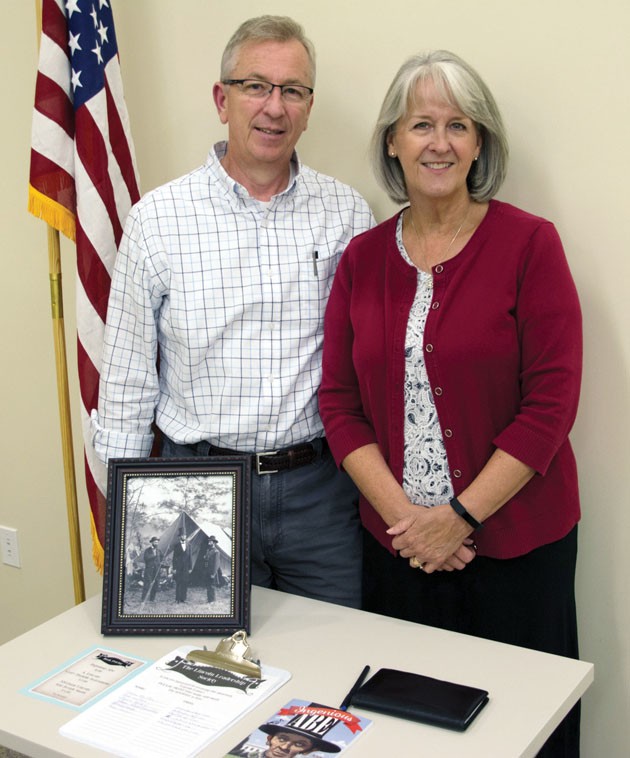 Ron and Kathleen Andersen stand behind a display of information and all but sold out books about Abraham Lincoln, whom they considered to be an instrument in God’s hand in getting our great nation back on track via the Civil War. (photo courtesy of Darrell Smith)

Ron Andersen, publisher of several books about our 16th President, shared his opinion that the Civil War happened because the Lord needed to call this nation to repentance so that our sacred constitution could be finished and upheld as the foundation and example of freedom for the entire world. Lincoln, who never joined a particular religion, nevertheless saw God’s hand in everything this country was involved in. He felt he would be intimately involved in the Civil War almost 30 years before it happened. This was about the same time Joseph Smith, the Mormon Prophet, prophesied about the Civil War starting in South Carolina over the issue of slavery.

When the Constitution was first passed, it was left incomplete because of the compromise that was necessary with the southern states over slavery. Coincidentally, Joseph Smith made his bid to become President of the United States in order to ensure that all men really were created equal and free. One of Smith’s proposals was to buy the black slaves’ freedom through land grants, which also would have benefited the slave owners. At one time, as many as 337 missionaries and apostles were out basically campaigning for Joseph Smith’s U.S. Presidency. Unfortunately, Smith was killed before any of this could happen. The Lord’s backup plan, it seems, was Abraham Lincoln, who fixed the flaw in the constitution by bringing to pass the 13th Amendment outlawing slavery, and the 14th Amendment ensuring that all states and organizations would have to live by it.

It was a very entertaining and inspiration-rich evening to see through Andersen’s eyes the true greatness of this wonderfully courageous President and man of God. We thank the Andersens for so willingly giving their time and experience to broaden our understanding of this great American Pioneer, and the freedoms we all enjoy because of him.

On Thursday, Nov. 3 at 6:30 p.m. in the TATC Building, Brent Hunt will give a fascinating presentation containing photos and history of the more than 20 different statues and monuments that the Settlement Canyon Chapter of the Sons of Utah Pioneers are responsible for maintaining. These historical markers stretch throughout the county from north to south and east to west. Many of these monuments were built by the Sons and Daughters of the Utah Pioneers. If you would like to view or revisit this history, much of it along the Pony Express Trail, come join us. This month, dinner is catered. If you haven’t been contacted for tickets, call your SUP representative before Oct. 27. Dinner starts at 6:30 p.m., followed immediately by Hunt’s presentation on the big screen at approximately 7 p.m.