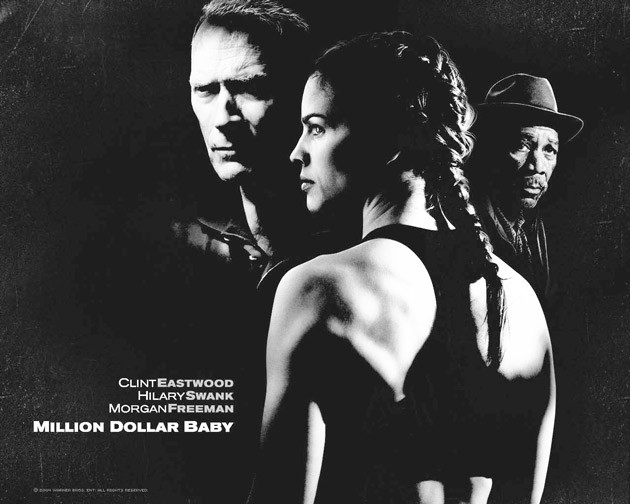 Last year it was all so predictable: The Lord of the Rings trilogy hadn’t yet been recognized properly by the Academy of Motion Picture Arts and Sciences. It seemed they’d been saving up all their accolades for the third and final installment in the trilogy, The Return of the King. That movie wound up making history, racking up a clean sweep of 11 Oscar wins for all 11 nominations.

There are no such neatly defined parameters for this year’s Oscars. There are plenty of great movies, to be sure. But none that stand out quite as boldly as the three-movie LOTR saga did last year. That makes this year’s outcome unpredictable. Hence, the actual ceremony (hosted by controversial comic Chris Rock) will likely be a lot more interesting.

Come Sunday evening, your guess will be as good as mine. But just for fun, here are my guesses in the top Oscar categories.

In the Best Actor category, the favorite is Jamie Foxx for his downright spooky imitation of Ray Charles in Ray. Johnny Depp’s tender father figure in Finding Neverland was nothing to sniff at; nor was Don Cheadle’s heroic performance in Hotel Rwanda, Leonardo DiCaprio’s engagingly neurotic turn as Howard Hughes in The Aviator, or Clint Eastwood’s gruffly loving boxing coach in Million Dollar Baby. (Too bad Paul Giamatti got left out of the race for his irritatingly overblown but funny mid-life crisis in Sideways.) Foxx is the obvious frontrunner for Ray. But if there were an upset (and I wouldn’t rule it out), I’d bet on Eastwood. You just can’t ignore a 70-something actor who’s still so perfectly at the top of his game.

Best Actress is a tough one. Hilary Swank has returned to the Oscars (she won in 2000 for Boys Don’t Cry) to prove that she’s more than a one-time winner. Her Million Dollar Baby turn as an impoverished 31-yearold who decides she wants to be a world class boxer is splendidly agonizing. I’m betting on Swank for another win, although my favorite performance of the year was Kate Winslet’s in Eternal Sunshine of the Spotless Mind, in which she plays a quirky city chick named Clementine who decides to have her boyfriend erased from her memory. Other nominees in the category include Catalina Sandino Moreno for Maria Full of Grace, Imelda Staunton for Vera Drake, and the always graceful Annette Bening for Being Julia.

The Best Supporting Actor trophy will likely land in the hands of Thomas Haden Church, whose wretched, sidesplitting turn as a confused groom-to-be is priceless in Sideways. But I’d be slightly more delighted to see it go to Morgan Freeman, who played a washed up boxer/gym janitor in Million Dollar Baby. The remaining nominees are Alan Alda, who gave a strong performance as unscrupulous Senator Owen Brewster in The Aviator; Clive Owen’s caustic performance in the relationship drama Closer; and Jamie Foxx for Collateral. For Best Supporting Actress, Cate Blanchette stands a fabulous chance at winning for her jocular, self-assured portrayal of screen legend Katharine Hepburn in The Aviator. As one of the finest actresses of her generation, she’d certainly deserve it. Still, there is the inescapable critical popularity of Sideways, and it’s nicely understated love-interest performance from Virginia Madsen. But if it weren’t to go to Blanchette, I’d guess Natalie Portman could upset the proceedings with her innocence-lost in Closer. She won this year’s Golden Globe for Best Supporting Actress. And she’s been begging, with those big soulful dramatic eyes, for an Oscar for years (she was nominated once in 1999 for Anywhere But Here). The other nominees are Laura Linney for Kinsey and Sophie Okonedo for Hotel Rwanda.

The Best Adapted Screenplay is the bitterest of them all. Can you really pit two such brilliantly different movies as Sideways and Million Dollar Baby against each other in the same category? You can, and unfortunately one of them is going to have to lose. I predict Sideways will win—the Academy’s probably feeling guilty by now for not nominated Paul Giamatti as Best Actor. Before Sunset, The Motorcycle Diaries, and Finding Neverland are deserving nominees in this category; particularly Finding Neverland. But I don’t think any of them will be elbowing their way into the blinding limelight cast by Million Dollar Baby and Sideways. Charlie Kaufman is hands down responsible for the Best Original Screenplay of the year. Eternal Sunshine of the Spotless Mind is Kaufman’s exploration of what we stand to lose when faced with the possibility of tampering with our own memories. It was my favorite movie of the entire year, and since the screenplay was written with such arresting vibrance, it won’t be forgotten by Academy voters either. The Aviator’s writer John Logan could be recognized instead with his high-profile movie, although I’d be extremely disappointed if that were to happen. Brad Bird’s The Incredibles will win Best Animated Picture, so voters won’t feel obligated to give him a win in this category. Writer/director Mike Leigh is also nominated for Vera Drake, and Keir Pearson and Terry George are nominated for Hotel Rwanda. Martin Scorsese is really, really, really hoping for Best Director for The Aviator. But he’s far from being the frontrunner in this category. I still think Scorsese has yet to show us his very best work. This one belongs to Clint Eastwood, who double-impressed with his acting and directing in Million Dollar Baby. Alexander Payne’s Sideways was slightly understated, and that makes him an underdog in this category; but I still think he stands a decent chance at winning the award over Eastwood. They’ve all got a better chance than Mike Leigh for Vera Drake and Taylor Hackford for Ray, both of whom are extremely talented but who aren’t destined for this award.

If you’d asked me a month or so ago, I’d have said the Best Picture award will probably go to The Aviator.