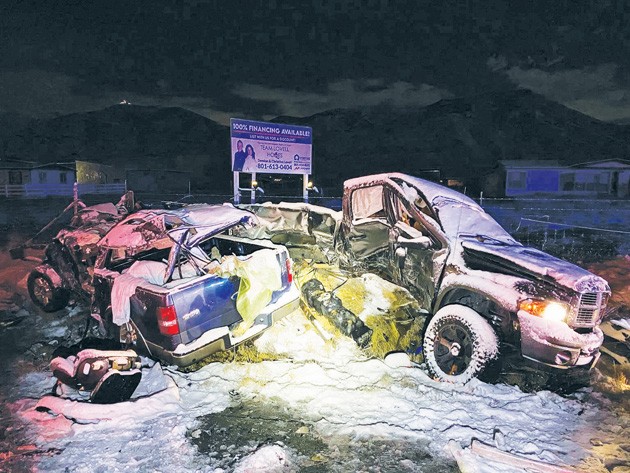 An accident on SR-36 in Erda claimed the life of an 18-year-old Tooele man on Saturday night.

Three critically injured, and one dead after Saturday night accident on SR-36 in Erda.

On Saturday at 9:04 p.m., a grey Dodge Ram 2500 was traveling southbound on SR-36 in the area of mile marker 60, according to a report from Utah Highway Patrol.

“The driver of the Dodge was traveling too fast for road conditions and lost control to the left and hopped the concrete divider facing eastbound across both northbound lanes,” said Nick Street, public information officer for the Utah Highway Patrol. “A blue Ford F-150 was traveling northbound in the same area and T-boned the Dodge Ram.”

Both vehicles ended up on the right shoulder in the weeds, according to Street.

The driver of the Dodge Ram was an 18-year-old male, a single occupant of the car, and was pronounced dead at the scene of the accident, Street said.

There was a family of five with two adults and three children in the F-150. The oldest child was 14-years-old.

The father of the children, who was driving, was extricated and transported in critical condition by a ground ambulance, since an air ambulance was unable to fly in the weather conditions, said Street.

All of the injured were later transported to another Salt Lake City area hospital.

“Northbound SR-36 was closed for two hours before opening one of the lanes,” said Street. “Lane two was closed until 1:35 a.m. the next day.”

The deceased driver of the Dodge Ram was identified as Treyton Ellis, age 18, of Tooele.

“When I look at this crash, I think of how our decisions behind the wheel affect those around us,” said Street. “This is an example of how poor decisions on the road caused the driver of the Dodge to cross over into oncoming traffic. This is a heartbreaking disaster for the family. People really should understand when they are driving their decisions can affect other people. Please reduce your speed, buckle up, and pay attention to the road ahead, and we can all get home safely.”