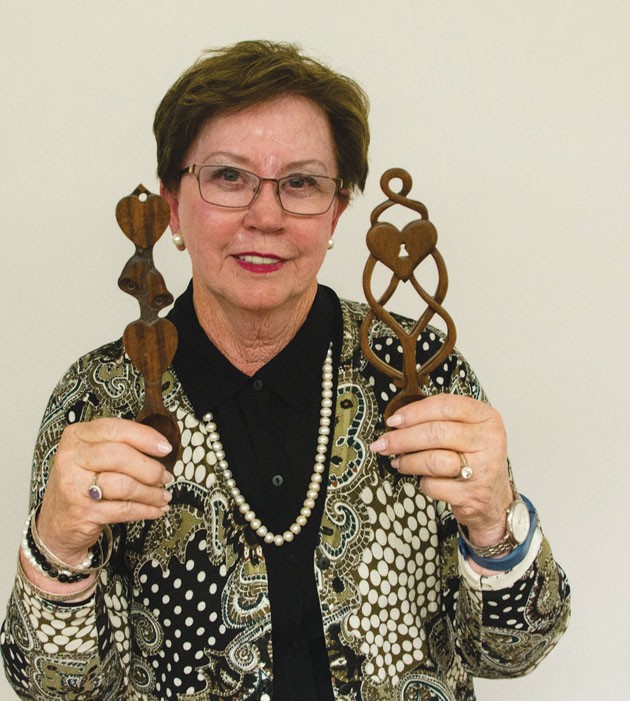 At the SUP group’s Oct. 5 meeting, Janette Bunn displays Welsh memorabilia that were called “engagement rings.” While these items are not really rings, they were intricately carved, hand stained and polished masterpieces which a young man in Wales would give to his special lass. Th token meant the couple was “going steady,” and would frequently lead to their marriage.

Janette Bunn presented the Sons of the Utah Pioneers group with the history of Tooele’s first department store, built in the 1800s as an underground store.

The store was owned and managed by the Ajax family in Centre, Utah. The store opened in 1869 after William Ajax, whose department store business in Salt Lake City was failing, moved his wife and nine children to a dugout in the Centre area.

The area was named “Centre” because it sat about half way between the mining areas of Ophir and Mercur and the farming and cattle area of St. John and Clover. The town eventually housed a U.S. Post Office.

Ajax noticed that his family seemed to do OK living in an underground house, according to Bunn, so he thought, “Why not build an underground store?” When the store was finished, its dimensions were 100 feet by 80 feet, with a depth of 20 feet. The store’s depth allowed for wagons delivering or picking up merchandise to drive under the store on one end, load up or unload, and continue by driving out the other end.

He also built corrals and stables that would house up to 100 horses and many more cattle and sheep.

Ajax had been a miner in Ireland and he had developed the habit of digging at night when it was cooler. He would drive his wagon the 8 miles to the Mercur area to haul home the timbers needed to shore up the walls and ceilings during daylight hours. For flooring he used the wooden packing cases that merchandise was delivered in.

He designed the store in such a way that the surface living areas were made of adobe and had interconnecting rooms for hotel service. His wife and children would handle the hotel side as well as help with the department store. This multi-leveled store was constructed in such a way that each deeper level faced south for light and even heat, which made it warm during the winter and cool during the summer.

It was Tooele County’s first convenience store, Bunn stated, and customers would sometimes travel 50-75 miles to shop not just for everyday pioneer era needs, but also for fine china, plates and vases as well as oil paintings, Charles Dickens novels and even the Encyclopedia Britannica.

Goods had to be hauled for miles to the underground store, yet prices were not at all exorbitant, Bunn said. Tomatoes were 10 cents for 2 1/2 lbs. A 3-gallon cask of mixed pickles was 35 cents and coffee was 35 cents a pound. If you couldn’t find a shirt that fit, Mrs. Ajax and her daughters provided same-day tailoring service.

William Ajax died in 1899, quite soon after the big panic of 1893-96. As a result of the panic, Ajax was owed thousands of dollars in credit given to customers who promised to pay after the next big strike, or when the debtors could sell their cattle. After his death, the family continued to run the store until the railroad finally came to Mercur.

The business slowly dried up until eventually, the family had to move. All that is left to see in Centre now are some shallow holes and a few fence posts. The ruins of the town were burned down and used by the homeless and others.

Bunn’s retelling of the Ajax store history was enchanting and gave the SUP a desire to travel back in time to see how the town really was. The next Settlement Canyon Chapters SUP meeting will involve food and an entertainment. It will be held Nov. 2 at 6:30 p.m.

Please join us for sumptuous roast beef dinner and try to figure out “Where in Tooele County is Darrell?” SUP member Darrell Smith will share slides taken here in Tooele County that many may or may not recognize. Attendees will be encouraged to guess where the pictures were taken.

The monthly meeting location has changed again. The new venue is the LDS meeting hall at 200 S. 200 West that now houses the Tooele 4th Ward.

Darrell Smith volunteers time as the publicity director of the Sons of Utah Pioneers Settlement Canyon Chapter. He also works as a docent at the Tooele Pioneer Museum. Smith can be reached at smithdar1948@gmail.com.