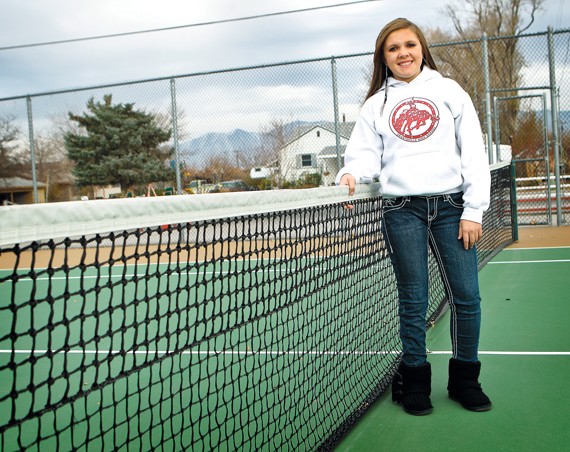 Although this year’s tennis season ended nearly two months ago, for freshman Morgan Matthews of Grantsville High School, it turned out to be one of her greatest successes: She took first place at region in girl’s junior varsity. Getting to that level of success wasn’t an easy task for Matthews.

At the age of 2, she was diagnosed with neuroblastoma — a cancer that forms in nerve tissue and often begins in early childhood. In Matthews’ case, the cancer was running down her spinal cord. One doctor told her parents that if they didn’t do a bone marrow transplant, Matthews would have a less than 5 percent chance of surviving. Matthew’s parents took her to another doctor at Primary Children’s Hospital in Salt Lake to get a second opinion. This doctor didn’t suggest a bone marrow transplant, but he did want to remove the cancer from Matthews’ body. In 2000, Matthews received surgery to remove the cancer.

During the surgery, one of the surgeons accidentally nicked the nerve that controls the movements of the foot and ankle, which is why Matthews now has drop foot — the dropping of the forefoot due to damage to the peroneal nerve or paralysis of the muscles in the anterior portion of the lower leg.

“We were mad at the doctor and hated him for making this mistake, but at the same time we loved him because he saved her life,” said Sheila Matthews, Morgan’s mother. “We wanted her to be normal. We didn’t know if she would be able to skip and hop around like other kids at school. We knew that she would be slower than them, but she has never complained about her problem. My husband and I have probably complained more than she has.”

Morgan has to wear a brace constantly that makes it easier for her to control her foot and ankle.

“It’s hard to find shoes that fit with the brace,” Morgan said. “I can’t wear flip flops, but since I’m in tennis shoes all the time anyway it doesn’t really bother me.”

Morgan started playing tennis when her mom signed her up for lessons when she was 10. It turned out that she was better at it than any other sport she had tried. Since then, Morgan has played tennis with a fierce determination. She finds an opponents’ weakness and uses it against them.

“Morgan always plays rock solid,” Sheila said. “There isn’t a match where she doesn’t give it her all.”

Morgan’s nickname on the tennis team is M-80 — M for Morgan and 80 because she won several matches in a row to gain a personal record of 8-0.

Morgan said her whole summer before starting high school was spent at the tennis court. Because of her determination, she said she could always see when and where the ball was coming. She could calculate it and put herself in the right position.

“Out of the seven girls we had on junior varsity, four of them were freshmen,” said head tennis coach Steve Thurgood. “Our No. 1 player was Morgan. Mobility might get to be an issue, but if she keeps guessing where the ball is coming like she’s been doing then she will be able to go really far. I think Morgan will probably be on varsity next year. Sometimes when you watch her play, you get scared because you think she won’t make it, but she always gets there.”

As her skill level increases it will get harder for her to keep up with the competition.

“She is such an inspiration and she doesn’t even realize it,” Sheila said. “That’s what makes her so special, that she thinks she is just like everybody else. She always has a good attitude and she inspires people she doesn’t even know.”

Morgan said sometimes her opponents underestimate her, but when she starts to play, they quickly see how good she is.

“Tennis is very mental and I can’t let them get inside my head,” she said. “Even if they are ahead I block it out and do my best to still win. I think tennis will be the only sport I play in high school. I want to focus on it as much as I can so that one day I can place at state.”