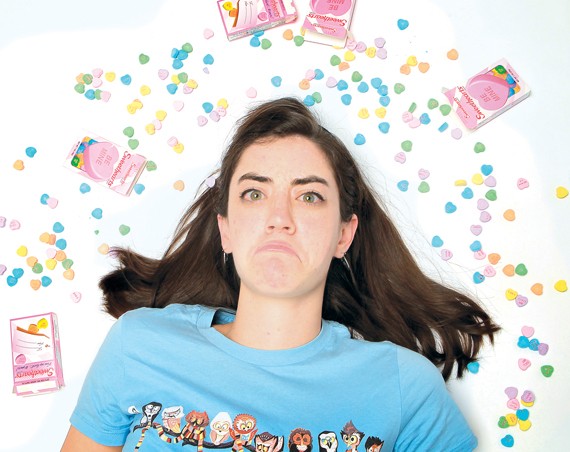 February 9, 2012
Adults could learn a thing or two from kids on Valentine’s Day

Long, long ago, when cell phones resembled bricks and Iran was that one weird country over in the Middle East somewhere, grownups were tall and scary and Valentine’s Day was fun.

It was like Christmas all over again, except much smaller and without presents and school was not canceled. Still, as February drew near, I remember eagerly anticipating the holiday. My elation was only fueled by the grocery store aisles filling up with stacks of candy and kitsch in every hue of red and pink imaginable.

Choosing which paper foldover cards to give to classmates was sometimes difficult, but always exciting. Although never allowed to get Teenage Mutant Ninja Turtles or Power Rangers cards, I was a fan of the Disney princesses, Care Bears and Barbie.

And the candy! Even when I could count my age on one hand, I knew the mini candy bars had all the same ingredients as the normal candy bars, but for some reason those erroneously named funsized, heart-wrapped bars tasted so much better. And while some of my friends said they thought conversation hearts tasted like chalk, I had eaten chalk and knew they were wrong. Besides, no chalk I met ever called me “QT Pie” or “So Sweet”.

Valentine’s Day in elementary school was not, of course, entirely free from stress. My friends and I were always careful to give cards with any possible hint of mushiness (“Won’t you be my Valentine” or “Be mine”) to each other, and save the more harmless ones (“You rock, Valentine!” or “Hope you have a great Valentine’s Day!”) for the general population, especially the boys in the class. When sorting out the pile of cards and candy from the meticulously decorated Valentine’s box or envelopes, too, it was always hoped that the kid in the back with an unfortunate crush did not give a particularly romantic or grand token, because that would have made recess awkward.

Those troubles seem so trivial compared to the woes the holiday can cause now. The Super Bowl’s usual flood of ads for cars or beer was punctuated with reminders of the swiftly approaching holiday. Every store that carries flowers and chocolate, it seems, is broadly advertising a special, and you can even get a heart-shaped pizza. (I have actually done this and it tastes just the same as the round kind.)

The chatter in the office, and with my friends in marriages or other committed relationships, has been filled with a combination of stress and excitement — the proportions of which usually depend on the gender of the person. I’ve never been in a steady relationship for V-Day, but the expectations of the holiday I hear from friends and see on television is an astonishingly complex balance of sentiment, romance and emotional nudity. It sounds more on par with rocket science or theoretical physics than the revelry of celebration.

Valentine’s Day has never been a big deal at my house. My parents have never done much — my mom will sometimes make heartshaped pancakes and my dad often brings home flowers — and the holiday has more or less retained that child-like innocence and fun even though my siblings and I have mostly all grown up. And I like it that way.

Outside, though, the day has changed. I think it’s great to have a day to focus on love and romance, especially in a world that seems to lack those things. I love the purpose of Valentine’s Day, but it seems like that is lost in the quest for a Hallmark-worthy day. I hear stories of pressure and expectations from my friends who are married or in relationships, and bitterness and bile from many of my single friends. The rules for the adult version of this holiday are confusing, and seem to make fun difficult, if not impossible. I could be going about it the wrong way, but it seems to me we had it right when boys still had cooties. Even with the heavy focus on candy, it felt like those construction-paper hearts and silly puns on cards meant more.

So keep your roses and fivecourse dinners, and pass the conversation hearts and pink-iced cookies — which, as it happens, also taste far sweeter than with any other color of frosting.