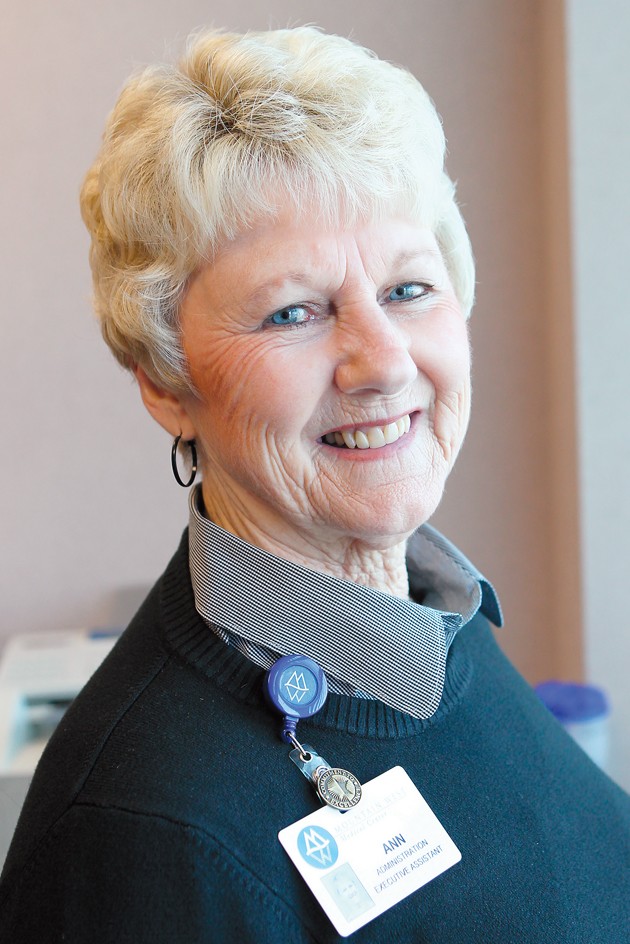 After nearly 33 years of working as an administrative assistant in two Tooele hospitals, Ann Lawson walked out of Mountain West Medical Center last Friday to begin her new life as a retiree.

The 70-year-old Erda resident began working at Tooele Valley Hospital as a part-time switchboard operator as a way to stay busy while her five kids were at school.

“We didn’t have a page system then,” she said. “I would have to run down and find people because there was only one phone in each department.”

Within a year, she began working full time and taking on more responsibilities, such as typing documents, organizing files, verifying doctors’ credentials, and helping with human resources duties.

“With credentials you are verifying all the licenses of each of the doctors,” said Lawson. “Every two years they have to be re-verified. When I started, there were 10 or 11 doctors and now we have 150 doctors.”

She added, “I’d also been helping the personnel director with benefits and keeping track of things for him, but one night they let him go and asked me to take over. It was a small hospital, so I did those three jobs for quite a while.”

Over the years, Lawson’s position morphed into a career as the administrative assistant to the CEO. Lawson said eventually her HR duties were turned over to a full-time HR director, and about a year and a half ago, she no longer verified doctors’ credentials.

During her 33 years at the hospital, Lawson has been the assistant to 28 different CEOs.

“There’s been quite a few changes over the years,” she said. “I have also been through six or seven different management companies. In 2000, CHS came in and bought the hospital and built the new one and changed the name.” The old hospital closed when Mountain West opened its new hospital in 2002.

Lawson said her greatest challenge was adjusting to a new management style 28 different times, but she did her best to roll with the punches.

“In all these years and with the 28 CEOs we’ve had, every one has come in and tried to do their very best job,” she said. “It was difficult sometimes, because even if they were only here for a 90-day interim, I still had to make adjustments. I learned to go with the flow, do what they asked me to do and just do my job.”

Although it wasn’t always easy — and there were even two different times when Lawson considered leaving — she always chose to stay.

“There were a couple of times when I almost left for other jobs during times of turmoil, but I just decided to stay and it’s always turned out good every time,” she said.

Lawson said even though it was difficult to adjust to so many changes, she learned to keep a smile on her face and keep going. She realizes the healthcare industry will always be changing, but she sees a bright future for MWMC.

“I think the biggest question right now is the new healthcare reform,” she said. “Our volumes are down, but they are everywhere because people are afraid of spending money. That will be a big challenge for all hospitals, but I think Mountain West will just continue to grow. There is a great vision for where it will go and the quality of care just keeps increasing.”

Lawson said her best memory from working at the hospital for so long is meeting a variety of interesting people.

“In doing all the credentialing, I got to find out a lot about people’s backgrounds,” she said. “I could find where they came from and I’m always interested in how they get to Tooele because these doctors went to medical school all over the place.”

Lawson said her greatest accomplishment over the last three decades is being able to learn and understand medical terms.

“I would take meeting minutes and I didn’t know any of the terms, but I was able to learn all of that stuff and what the doctors were talking about,” she said. “It was always so stimulating to my brain because I was learning something new all the time. New procedures come out, and with that new equipment comes with them. It’s amazing to see how medicine has changed.”

Lawson said MWMC’s quality of care is something she’s always been proud of.

“For a long time people went to Salt Lake for everything, but they’ve turned around and realized they can get the same great care here,” she said. “I never question the quality of care. I think people hold it against the doctors because they’re working at a small hospital, but they’re still great doctors with great education and training. They just choose to raise their families in a small town.

“I’ve always tried to be meticulous in the credentialing process because my family will use these doctors,” she added. “That was always in the back of my mind when I saw an application.”

Now that Lawson is retired, she said she’s going to take a couple of months to relax. After that, she hopes to travel with her husband, spend more time with her grandchildren and complete some genealogy work.

No one has been hired to take over Lawson’s position, but she said the hospital is currently in the interviewing process and should have someone hired within the next month.