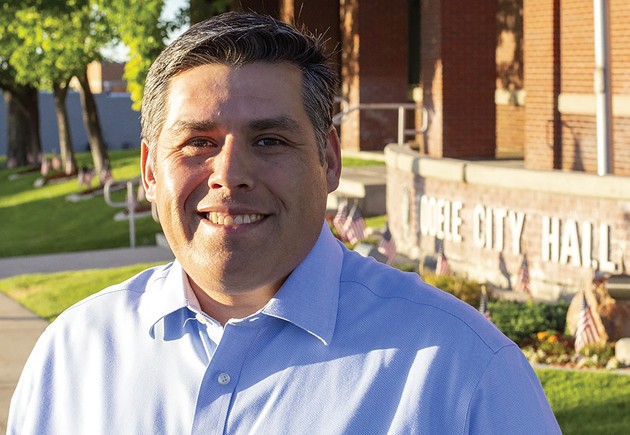 November 21, 2019
After recount, Graf is still the winner 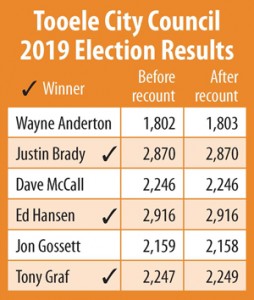 A recount of ballots cast on Nov. 5 has confirmed that the winner of the third seat on Tooele City Council is Tony Graf.

The results of the recount were announced at Wednesday night’s Tooele City Council meeting.

The results of the recount put Graf at 2,249 votes with the next nearest candidate, incumbent Dave McCall, at 2,246.

In the City Council race, voters had six candidates to choose from and the top three vote getters won a seat on the council.

At the close of ballot counting on election eve, McCall held a seven vote lead over Graf for the third slot on the city council.

After additional mail in ballots and provisional ballots were counted on Nov. 7, McCall’s victory margin shrunk to one vote with him at 2,243 and Graf at 2,242.

McCall requested a recount, which started at the Tooele County Clerk’s office at 9 a.m. Wednesday.

Although this was a municipal election, the municipalities contracted with the county clerk’s office to conduct the elections.

Clerk’s office employees ran the entire batch of 12,701 ballots through their scanning machine and processed them through the election software machine.

The ballots were stored in batches of 50 in ten Banker Boxes.

When all was done, the new report showed Wayne Anderton picked up one additional vote, Tony Graff picked up two votes, Jon Gossett lost one vote, and Justin Brady, Dave McCall and and Ed Hansen’s vote stayed the same.

Heralded in news stories as the first African-American elected to the Tooele City Council, McCall was first elected in November 2007.

In 1980, McCall joined the Marine Corps and spent most of his adult life in the military. He traveled to Japan and Europe, and served in Operation Desert Storm before coming to Tooele. When he arrived here, Tooele was just another posting. But over time that changed.

At the time of his first election to the City Council, McCall said, “I wouldn’t say it’s groundbreaking. I’ve met a lot of really good people here and the fact that I am who I am hasn’t played a part [in how I’ve been treated]. They’ve respected me for me.”

According to Graf’s biography on his campaign Facebook page, he had lived in Tooele County for 20 years.

Graf currently serves as chairman of the Tooele City Planning Commission, which meets twice a month to address planning and zoning issues for Tooele.

Graf may be the first Hispanic member elected to the Tooele City Council. His mother immigrated to the US as a child from Mexico.