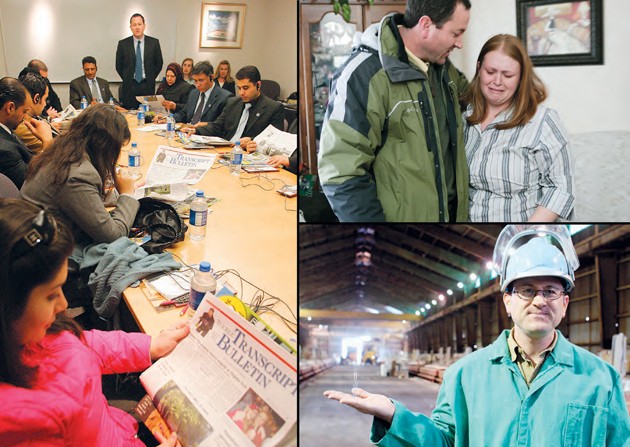 January 3, 2013
After six years as editor, it’s time for another leap of faith

I went outside on the rooftop to take the call. The morning tradewinds were light and Chinatown, where I worked, was just coming to life. On the narrow streets below, busses squealed into their stops, delivery trucks clanged their ramps down and business people in aloha shirts hustled down the sidewalk. Facing to sea, I watched two tug boats guiding a barge into Honolulu Harbor.

It was a short conversation, the gist of which was this: I had been offered the position of editor at the Transcript-Bulletin.

A month later, I was in Tooele for my first day of work. Clayton Dunn, the newspaper’s associate publisher, shook my hand and led me upstairs to a bullpen with six desks.

“This is where the editor usually sits,” he said, encapsulating job duties and future expectations in one seemingly innocuous comment.

I looked through the blinds onto Main Street, aka State Road 36. It was late October and the last dead leaves were clinging on against a chilly wind. I watched an old woman shuffle up the steps of the post office. I waited. There was a long break in traffic and then a double-trailer gravel truck sped by.

After almost 17 years away, I had come home.

That was more than six years ago. In those early days, I was happy to be back in the Tooele Valley, surrounded by family, but the cultural adjustment didn’t come easy. I overdressed. I fumbled through some social situations where less, not more, was expected of me. Once I tried to kiss a co-worker’s wife on the cheek, as I would have done in Hawaii, and she recoiled as if a were a leper.

After a while, however, I started to find my feet. I made friends, and maybe a few enemies. Joel Dunn, our publisher emeritus, is fond of saying a life at the Transcript has meant he has no more friends in Tooele. I’d like to think I still have a few.

I’ve been fortunate to have worked with some exceptionally talented and committed journalists along the way. Mark Watson, our sports editor, has been a friend and confidant to me the entire time I’ve been here. Tim Gillie has inspired me with his tenacity, kindness, wisdom and good humor, even in the face of furious opposition. Maegan Burr is tough as nails, and yet people always seem to smile when they see her coming. Lisa Christensen, our most writerly reporter, is equal parts zany and utterly dependable. Rachel Madison has the kind of quiet strength that makes her a natural leader. The newest member of our staff, Richard Briggs, is a clever sportswriter who fit with us from day one.

Others who have moved on — Sarah Miley, Troy Boman, Missy Bird, Nick Drake, Jamie Belnap, Emma Penrod and Natalie Tripp spring to mind — also made me honored to work with them.

I’ve been fortunate to be employed by the Dunn family. Few people, I think, can understand the burden the Dunns have taken on in keeping this community’s newspaper alive for 119 years. I feel a tremendous sense of gratitude toward them, not only for giving me the opportunity to reconnect with my family after so many years away, but also for the unwavering support they have given me through all the battles we have fought together.

I’m proud of what we’ve accomplished. The Transcript today is widely regarded as the best non-daily newspaper in Utah — a designation backed up by numerous awards from both the Society of Professional Journalists Utah Headliner’s Chapter and the Utah Press Association. We cover hard news, serve as the watchdog of local government and run editorials with teeth, but we also tell the sort of human stories that make small towns great. We created awards like the Person of the Year, Preps of the Year and the Transcript Cup to recognize local excellence. We brought in record donations for families in need through our Transcript-Bulletin Christmas Benefit Fund. We expanded our program for high school interns interested in journalism. We staged candidate debates to help voters better engage in local politics.

Now I’m leaving to take a new job in Washington, D.C., working for the State Department. It will be hard to say good-bye. Of all the things I’ll miss about living in Tooele, the people will come first. I’m leaving behind my grandmother, Myrtle Barrus, who has been one of the great lights of my life, a large extended family, and also my soccer team, a group of boys who I love like sons after coaching them for years.

Being a journalist in a small town is like being a missionary far from home. Both demand faith. Everything the journalist does is for the vast, silent majority of readers — the ordinary people who work regular jobs, pay taxes and send their kids to public schools. But these people rarely tell you, at least in a public way, what they think. Instead, the loudest voices belong to those involved in the news — the government and business leaders, the school officials. If these voices drown out the quiet voices, a journalist — or a newspaper — can begin to forget whom they really serve.

That morning in Honolulu, standing on that rooftop, I made a leap of faith. I landed in a place I cared about, surrounded by people I would eventually call friends. I’d say that makes it all worth it.