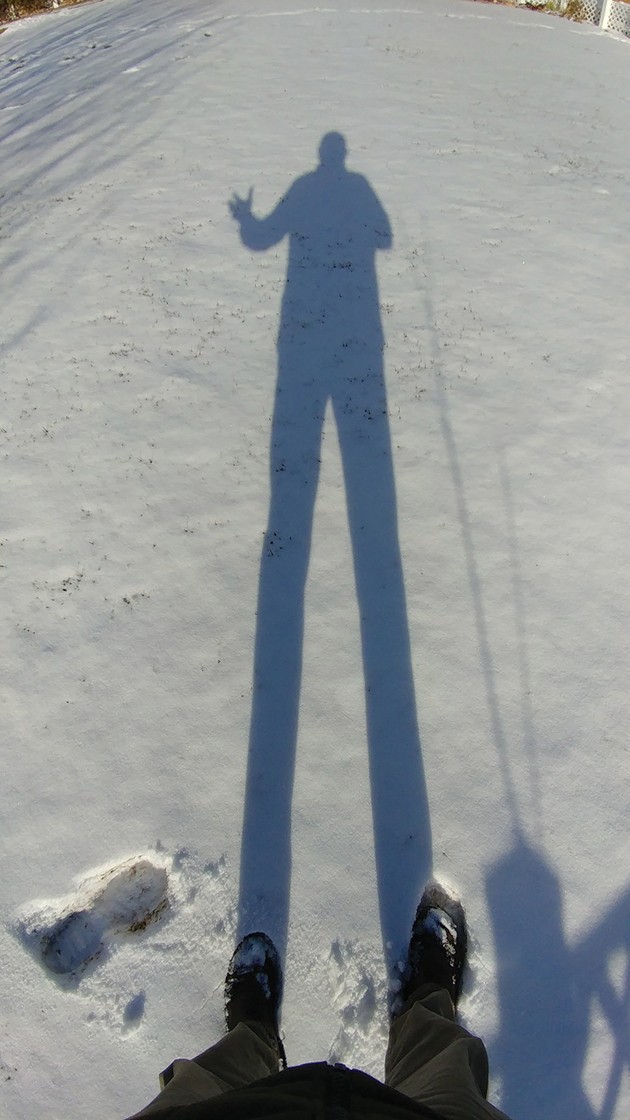 The longest shadows are cast today, the first day of winter. The sun is at its lowest position in the horizon for the year.

December 21, 2017
After winter solstice, gardening time is not far away

Whoa! Where did all the daylight go? Why are we sitting down to dinner while it’s dark when just a few months ago, it wasn’t dark until nearly 10 p.m.? Did we start dinner preparation later and time got away from us? Nope. It’s the annual shift to shorter days and the range of adjustments we make in response to that shift.

Today is Dec. 21 and winter solstice. It’s the shortest day of the year — at least for us in the Northern Hemisphere. But what is one man’s winter solstice is another’s summer solstice. I remember being down in Australia many years ago near Christmas time, and it was summer there with high heat and long days. At the same time, we “up here” were experiencing the start of our official winter season.

Why are there solstices and equinoxes? Is this something our ancestors made up, simply metering when one fourth of the year had transpired? Not really. These terms simply describe what is observable, and go on year after year. A solstice is either the shortest or longest day of the year. The word itself has meanings related to a turning point, or when something appears to stand still.

As for equinox, if there is a shortest and longest day, then there must be two days when the length of day and night will be just about the same — equal. You can almost see the meaning in the word — equal night (and day).

Solstices and equinoxes occur because of the 23.5-degree tilt of the earth’s axis. It takes about 364 or 365 days for the earth to complete its orbit around the sun, so each quarter of a year is about 91 days. Take a look at the calendar and you’ll see that the vernal (spring) equinox is about March 21, the summer solstice is about June 21, the autumnal equinox is about Sept. 21, and winter solstice is about Dec. 21.

But why are some days longer and shorter? The tilt of the earth’s axis puts part of the earth in sunlight or darkness for longer and shorter periods of time depending on what time of year it is. On June 21, the sun will never set in the Arctic Circle and at the North Pole, while at the South Pole, the sun will never rise — and it will be the first day of winter there.

The reverse is true on winter solstice. There is no sunrise on the North Pole today, and there is no sunset south of the Antarctic Circle. Today, the earth’s position relative to the sun has the sun tracking directly above the Tropic of Capricorn in the Southern Hemisphere, the most southern position that it will be this year.

When it’s the first day of summer, the sun will be tracking above the Tropic of Cancer in the Northern Hemisphere. The tropics of Cancer and Capricorn are not the only lines of latitude that are designated because of their relation to the sun’s relative position as the seasons occur. Both the Antarctic and Arctic Circles are positions where the sun is just barely visible along the horizon when winter overtakes the region.

As for the equinoxes, those are the days when the earth is rotating on its axis “sideways” to the sun, so the effects of day and night length are negated momentarily. On those days, the duration of sunlight and darkness is just about the same all over the world.

You may find it interesting to know that the earth is actually the closest to the sun in January. Then why is it not summer during that time in the Northern Hemisphere? If January is the time when the earth is closest to the sun, then six months later (July) is when the sun is the furthest away from the earth. Why wouldn’t it be winter in July then? The difference in the distance is just over 3 percent and is caused by the earth’s elliptical orbit around the sun. That 3 percent isn’t enough to create a change of season. Again, it’s the tilt of the earth, and not the orbit, that gives us seasons.

A misperception I’ve had related to the solstices and equinoxes is that I believed them to be daylong events. Actually, they are moments in time. For today’s winter solstice, the exact moment is 9:28 a.m. mountain time, when the sun is directly over the Tropic of Capricorn. The 2018 vernal equinox, the first day of spring next year, will occur on March 20 at precisely 10:15 a.m. That’s when the sun crosses the imaginary line in the sky above the earth’s equator (known as the celestial equator). In the spring, the relative position of the sun moves from south to north. But, the opposite will be true in September 2018’s autumnal equinox when the sun appears to move from north to south.

These specific dates can move slightly. That’s due mostly to the imperfection of our calendars and our need to make up for days and resets to the galaxy’s timing. The winter solstice is usually on Dec. 21, but it can also be the day before or after, and even occasionally on Dec. 23. These changes are few and far between, but they do happen. For instance, winter solstice occurred on Dec. 23 in 1903, but it will be a long wait until 2303 to have it happen again.

As we approach Christmas, it’s interesting that the first real Christmas was probably not during winter at all — if we put any weight on the Biblical account of the birth of Christ. Even though the Bible doesn’t state a date or time of year that Jesus’ birth occurred, its reasonable to believe He was really born in the spring rather than winter. Why? The shepherds were watching their flocks outdoors at night, a common time when flocks were pastured outside and there were a lot of lambs being born.

I suspect that the timing of Christmas was moved to provide a celebratory boost to a cold and dark time of the year. Some believe that Christmas was a feast day closely linked to the Roman festival called Saturnalia. Saturnalia was a weeklong festival of feasting, gift-giving and overall merriment. The festival was named after the Roman god Saturn — the god of the sun, agriculture and time. It was so popular that it’s not unreasonable to believe many of its customs were incorporated into the celebration of Christmas when Christianity flourished.

So enjoy the shortest day of the year in the northern hemisphere. For us who enjoy the garden, it means, starting Friday, the days will begin to grow longer, bit-by-bit, until delicious warmth creeps back in and we can begin our annual adventure of growing things.