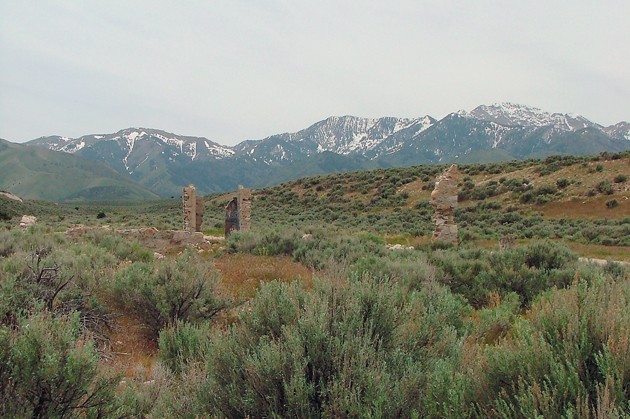 Picture is looking west/southwest up the South Willow Canyon drainage in the vicinity of the old Pumping Station ruins which is right near where the house must have been that Haws holed up in his last night on earth.

“Courage is being scared to death but saddling up anyway.”

hile digging through old newspaper archives and dusty historical compilations, I found an interesting tale of courage and determination displayed by early citizens of Tooele County — Grantsville citizens to be exact.

I find it interesting to read old stories and then go walk the ground where they occurred, or may have occurred. I like to see if any of the old buildings are still there and if any cemetery markers corroborate the tale. This article is the fruit of such an investigation.

Sometime before spring 1870, Albert H. Haws moved to Grantsville, converted to Mormonism and married a local Mormon woman. It is surmised by some that Haws came to Utah with Col. Connors’ California Volunteers, but no one knows for sure.

The citizens of Grantsville, however, had the general impression that Haws was a questionable character who would say or do almost anything to further his own interests. In the spring of 1870 it was learned by the authorities that Haws was actually a desperado wanted for a heinous murder in Nevada.

On May 2, 1870, Deputy Marshal William R. Storey of Utah Territory, and Deputy Sheriff Joseph P. Carrigan of Nevada, went to Grantsville to apprehend Haws so that he could face justice for his crime. The lawmen determined from residents where Haws’ house was located, secured their horse and buggy by the side of the road, and walked up to his house.

According to several sources, Deputy Carrigan failed to notify the Tooele County Sheriff, Mr. Tanner, that he was going to attempt to apprehend Haws. This was highly unusual, but the oversight may have something to do with the $1,500 award that was placed on the man’s head.

The lawmen found Haws in the cow yard and after a brief introduction, Storey pulled from his pocket the warrant and read it aloud while Carrigan drew a revolver, cocked it, and leveled it at Haws.

According to a newspaper article of the day, Haws stated “Gentlemen, you’ve got me” and as Carrigan slipped the irons onto his wrists, Haws deftly wrestled the gun from Carrigan, which discharged during the struggle. The bullet grazed Haws’ stomach while it passed through his shirt. Haws secured the weapon from Carrigan and fired two shots at Storey, one of which entered his armpit on the left side and the other hit him in the chest under his left breast — killing him instantly.

Haws did not kill Carrigan, and what happened next to the deputy is unclear. Yet Haws gathered his two pistols from his house, took Storey’s and Carrigan’s weapons, and fled south out of town. The citizens of Grantsville were dismayed for several reasons. First, Storey was well respected and liked in the community. Second, it was feared, and rightly so, that the gentiles, hearing that Storey was killed, would assume that some Mormon clique, possibly Danites, had killed him. Though this wasn’t true, sentiments would run high and the community ran the risk of facing severe retribution.

For these reasons and the simple requirements of justice, citizens formed a posse and resolved to take Haws no matter the cost. Search parties were sent out in all directions, even Orrin Porter Rockwell was involved, searching the area around Simpson Springs.

In the meantime, Haws doubled back on his trail and ran into a stock boy on the way to his brother-in-law’s house on South Willow Creek about five miles south of Grantsville.

Haws told the boy that if he revealed his location, he would kill him. He then went and hid in the aforementioned house with his brother in law, his wife and their children. While in the house, Haws announced that he would rather be shot than hung.

The stock boy disregarded Haws’ warning and alerted the men in Grantsville. Another posse was raised, and in short order, was in place around the house on South Willow Creek.

The posse dared not move on the house because of the family that would be caught in the cross fire, so they hunkered down and more men from the town joined them throughout the night. When the morning came, Haws looked out the window and noticed some of the men at a distance and fled the residence with great haste, mounting his horse on the run.

The posse, under command of John W. Cooley, fanned out and cautiously began searching the brush. Festus Sprauge, Emanuel Bagley and Samuel Wooley joined the search. As Sprauge was walking down a cow path through the thick brush, he came upon Haws.

As Sprauge drew up his gun, Haws fired a shot that caught Sprauge in the chest just above his right nipple and exited his upper left chest. Sprauge fired his gun but his muzzle drooped as he took the bullet and it was ineffective.

Cooley attempted to fire his gun, but it only snapped so he threw it down and commenced to assault Haws by throwing rocks. Bagley, hearing the shots, honed in on Haws and fired from across the creek, hitting him in the side. At this point the firing became general from all the members of the posse and Haws was riddled with over 12 bullets in short order.

Cooley’s rocks did some damage as well as Haws’ face was mashed in from contact with the rocks.

Even in death, Haws was not finished with the good citizens of Grantsville. He had one of his pistols tied to his belt in such a way that when taken ahold of it would discharge. As his mangled corpse was turned over the bullet from this arrangement killed John Padget and passed through the hand of William Everill.

By this time on May 3, W.D. Rydalch and H.P. Kimball had taken the body of Storey to Salt Lake City, and as feared, quite a ruckus was beginning to brew but it was soon quelled when John Gibson showed up with the mangled body of Haws. An inquest was held into the killing of Haws and here is the official findings of that court.

“An inquest was held this morning at City Hall on the body of Albert H. Haws, the desperado shot at Grantsville yesterday and the following verdict was returned by the jury: We the jury being duly impaneled and sworn to inquire into the cause of death of Albert H. Haws, do find from the testimony before us that the said Haws on Tuesday the 3rd in Tooele County, Territory of Utah at about 11 o’clock a.m. came to his death by a pistol or gunshot wound by the hand of the posse from Tooele County assisting the officers of the State of Nevada and the Territory of Utah in the arrest of the said Albert Haws, charged with murder in the State of Nevada.”

Last weekend I went out to South Willow Canyon to the crumbling ruins of the old water pumping station that used to stand at the mouth of the canyon wash. Only a few stone spires or corners of that old brick building remain. The house Haws hid in during his final night on earth must have been close around here somewhere.

It is interesting to get out and walk the terrain while you consider the sometimes ridiculous tales of the past. As my daughter and I looked around there, I thought about the short but violent end of Haws who was brought to immediate justice in this vicinity 144 years ago by a brave and relentless posse from Grantsville. Walking through the sage brush I thought to myself, The wild west roots surely run deep out here in Tooele County.