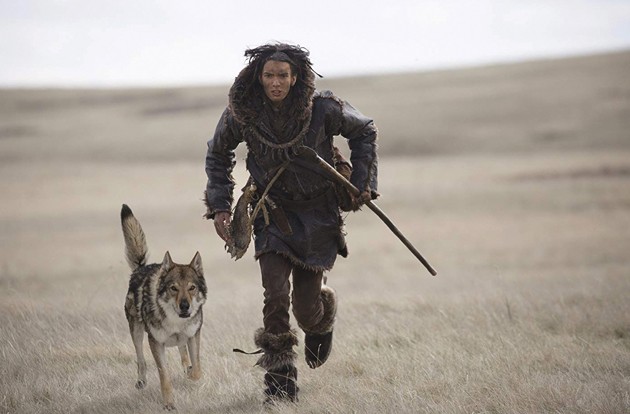 Alpha and Keda in the visually stunning movie “Alpha.” (Courtesy of Sony Pictures)

Alpha,” the story about man’s best friend that dates back more than 20,000 years, was released last Friday. I’ll be honest: I’m a big dog lover, but I was not excited to see this film. I had seen the trailer multiple times and the story looked bland. It didn’t seem to offer anything other than the origin story of dogs. After watching it, I can say that my preconceived notion was confirmed.

The film follows Keda (Kodi Smit-McPhee), a boy trying to find his place in his tribe. The Chief, his father Tau (Jóhannes Jóhannesson), decides he is ready to accompany the men of the group on their yearly quest to hunt the beasts because he demonstrates remarkable skills in carving stone weapons.

The men take on their quest after meeting up with a neighboring tribe who are their allies. When living off the land, they have to kill animals in order to survive. Keda has trouble killing living things and feels ashamed for being a coward.

After many days of walking, the tribes come across the beasts. With their primitive weapons, they scare the beasts and manage to separate a few from the stampede. Keda, however, is confronted by a beast and ends up being thrown from a nearby cliff. The others leave supposing him to be dead. But when Keda regains consciousness, he must set out back home on the journey to discover his manhood and his best friend.

I know what you’re thinking. Where are the dogs? Trust me they are in there, but you’ll have to wait a while before they come.

I’m surprised I have a lot to say about a movie I didn’t want to see. The first thing to mention is the scenery in the film was beautiful. It did seem like a documentary of the Paleolithic era at certain moments. That being said, in the few sequences were CGI (computer-generated imagery) was required, it was done poorly. I can point out every frame where they use CGI because it was that noticeable.

There is a reason — or at least should be a reason — behind everything filmmakers decide to put into a movie. Whether it is for world building or a hidden theme, there has to be a purpose. When I see a movie where half the stuff thrown into it is completely unnecessary, it gets on my nerves; I feel as if I’m wasting my time.

Hardly anything in the film felt justified. For example, in the opening scene, Kedah is thrown from a cliff only for us to cut back to a week earlier to when he started the quest. Why didn’t they just start at the beginning of the quest in the first place? And then when we get back to that moment in the film, it is done in this cringy editing style to get past what we have already seen. I could say more on the terrible editing at climactic moments, but we don’t have all day. Along with being unnecessary, it was boring. I don’t plan on ever watching this movie again.

If you are a dog lover, and you just have to watch this film, I would recommend seeing Lasse Hallström’s films: “Hachi: A Dog’s Tale” and “A Dog’s Purpose” beforehand just to know what a good dog film looks like.

I feel that I’m being generous about giving “Alpha” a C+ because I could go lower. The one thing that holds me back is I could see there was an effort by the cast and crew to make a good film — even though the outcome was disappointing. It would be tough to film a movie entirely outdoors and in a primitive language, so I guess I have to hand it to them.