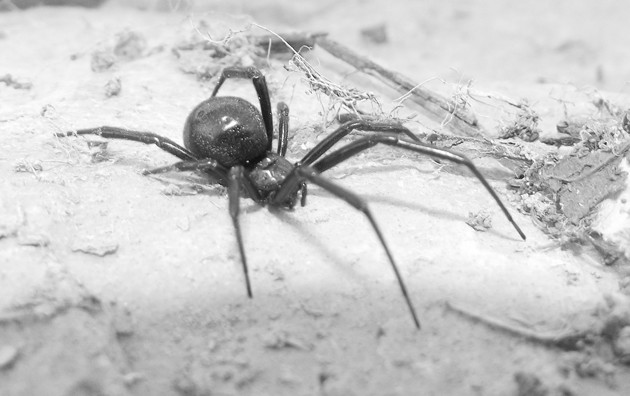 This female black widow was found resting underneath a rock above Settlement Canyon Reservoir. The black widow is the most poisonous spider in North America.

In our environment, spiders play an important role in controlling our insect population. Did you know a single spider will devour around 2,000 insects each year?

In our county, Tooele is home to many different species of black widow spiders. There is one that is not only commonly seen around our county, but is also the most poisonous spider in North America.

Coming from the family of Theridiidae or “comb-footed” spiders, the black widow spider is considered very common.

Identified by its sleek black skin and the red hourglass on its abdomen, black widows are carnivorous and usually hide out in dark, undisturbed places. These can include leaf piles, underneath large rocks, firewood piles, animal-dug holes and pipes. They’ll typically live anywhere dark where a web can be strung.

Because of the female’s cannibalistic habit, the spider was named black widow because the females often eat the males once they mate. However, sometimes the male is fortunate enough to make a quick retreat and escape from becoming his mate’s lunch.

Many people want and should avoid black widows because their venom is extremely toxic and can cause serious illness or even death to both children and adults.

Although death occurrence is low, do not underestimate the spider. The black widow’s venom is 15 times stronger than that of a rattlesnake.

Avoidance and using extra caution when you are in areas where they live is the best way to prevent a bite. Don’t tamper with webs or disturb their sleep. You may come to find that they are actually quite peaceful and if you leave them alone, they will return the favor by feasting on common pests around us everywhere. These include mosquitoes, flies, grasshoppers, moths, beetles, ants, caterpillars, cockroaches, crickets and sometimes other spiders.