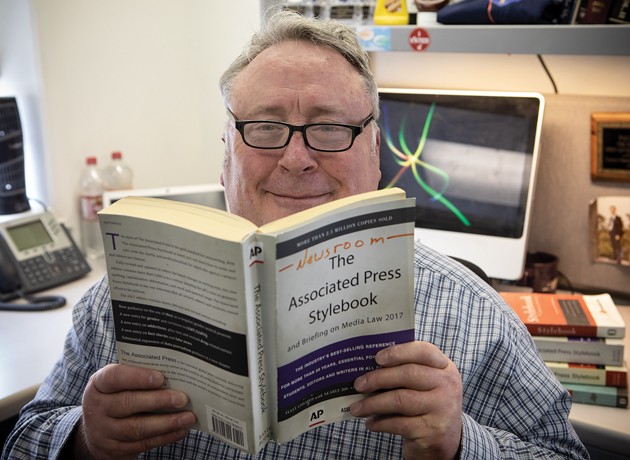 April 11, 2019
Am I awestruck or awe-struck? The AP Stylebook knows

I’ve never really trusted my memory, even though it has always been pretty good to me.

It doesn’t have anything to do with age. I’ve never really had confidence in my memory.

When I was in elementary school that lack of trust hurt my grade in arithmetic.

We used to get timed tests in addition, subtraction, and multiplication. We weren’t supposed to calculate an answer, but quickly recall the answer and write it down and move on to the next one.

I always got 100% of them correct, but I never finished the full sheet. Sometimes I answered less than half of what my classmates answered.

I just didn’t trust my ability to recall that six plus three is nine. I mean, I could remember nine, but what if I remembered wrong? Every answer had to be perfect.

I devised several clever methods to check my answers. I used the clock — thankfully we had analog clocks with numbers and hands — as a number line. I would find the six and then count three more numbers over and find nine. Now I knew that nine was right.

Sometimes I would count silently to myself as I lightly tapped my pencil on the paper in the same pattern as the dots on a die.

That same frustration with trusting my memory and the quest for perfection still plagues me today.

But not with arithmetic. I’m pretty comfortable with seven plus five equals 12. It’s with writing.

While journalists are normally very independent and creative people, for the sake of uniformity, somebody had to develop a book of rules for journalists.

A book of rules eliminates the gray areas of English language rules and is the final arbiter — or is it arbitrator — between formal language and the vernacular.

The book of rules in most newsrooms across the country is the Associated Press Stylebook.

The AP stylebook eliminates judgment and causes all disputes to be settled uniformly. As a result, readers everywhere see barbecue, not barbeque or bar-b-q. Ketchup is always ketchup and never catsup. And that mostly cotton shirt that you might wear under a shirt is a T-shirt, not a t-shirt or tee shirt.

The problem is the rules sometimes appear arbitrary. There is usually no rule to follow. In some cases the entry in the AP Stylebook warns you that the AP style is a contradiction to normal rules.

The only way to know AP Style is just to know it, which requires memory, and there’s my problem.

I have to look it up, because what if I remember it wrong?

Wrong is not an option, especially for a newspaper — and there is an entry for fake news in the AP Stylebook.

Complicating my usual self-doubt is the fact that AP keeps moving the target.

I’m sure that once a year a secret society of copywriters get together and possibly offer up a sacrifice of writers blood — newspaper ink — and make changes to the stylebook. This keeps things up to date and helps sell new books.

When I first started writing for the Transcript Bulletin, I wrote about the only big-box store on the north end of Tooele City. I called it Walmart, because that’s what it said on the side of the building and on the retailer’s plastic sacks.

My editor sent back my story. Among the corrections, he asked me to change Walmart to Wal-Mart, because the sign on the store is irrelevant — the AP Stylebook said it’s “Wal-Mart.”

A few years later, I checked another story in which I made reference to the store from Arkansas, but this time the editor had changed every Wal-Mart to Walmart.

“Hey, you got that wrong,” I said with confidence.

So I started using Walmart again.

That worked great until a few years ago AP changed it back to Wal-Mart.

But don’t worry, I understand since Wal-Mart officially changed its corporate name to Walmart, Inc., it’s now OK to call it Walmart, again.

To be safe, I might start using “that store that shall not be named.”

Usually in journalism if you can say the same thing in less words, or in this case fewer letters, you do.

One school of thought is that the percent sign did not properly transmit properly over AP’s old teletype system, so it had to be spelled out.

The other story I’ve heard is that back in the days when newspapers were printed using lead type, ink would pool up in the little circles in the percent sign and leave an indistinguishable smudge when printed.

But who am I to tell a secret group of copy editors that took forever to change Internet to internet or e-mail to email, that they need to change something. They’ll do it, when they want to.

But then, just last week, I had a stop the presses moment.

I was preparing a story from AP’s Newsfinder service for our paper.

I saw a percent sign and I immediately deleted it and typed percent in its place.

As I struck the “t” to end the word, it was like I flipped a light switch.

“This is an AP story. How could AP let such an obvious mistake get past them,” I thought.

A quick Google search discovered a tweet from the AP Stylebook dated just a few days ago.

The percent sign is now to be used when it is paired with a number!

I guess I will thank the AP secret society by buying a new stylebook when this change makes it to print.

I understand AP has made about 200 changes to the AP Stylebook this year, which is normal. 3-D is now 3D. Get ready to see reelect instead of re-elect. Third-grade teachers are now third grade teachers, although they teach third-grade students.

I told you they don’t follow rules nor make sense.

This one isn’t new, but it has always perplexed me, if you strictly interpret AP rules.

The entry in the AP Stylebook for the holiday that falls on the day after July 3 is called Fourth of July or July Fourth. The entry also notes that the federal holiday is observed on Friday if July 4 falls on a Saturday and on Monday if it falls on a Sunday.

So does that mean if July 4 falls on a Saturday that July 3 is July Fourth?

Think about that while you’re looking at the beautiful % symbols in today’s story about March’s weather.

One thought on “Am I awestruck or awe-struck? The AP Stylebook knows”