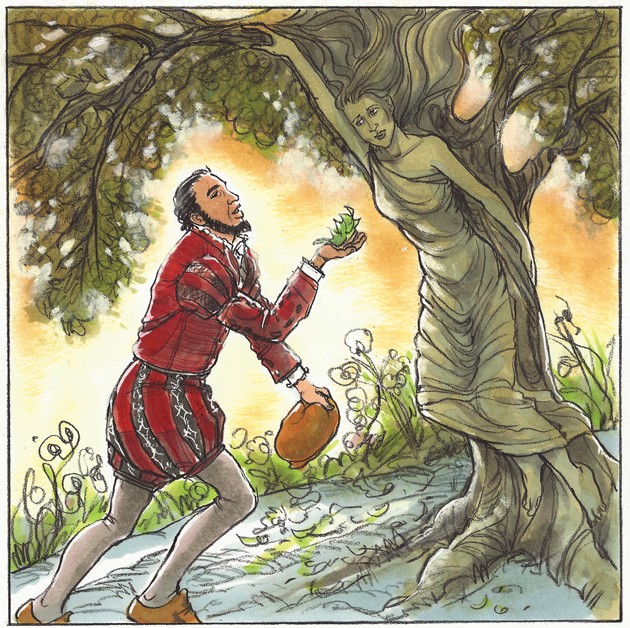 Once upon a time, there lived a wealthy man named Amedeo who collected rare things. One day, a stranger came and asked to see his collection.

Amedeo loved to show off his glassware and jewelry and rugs and lamps, but as the stranger studied these, she shook her head and looked quizzically at Amedeo. “You’re missing the best thing of all,” she said.

“What could I possibly have missed?” Amedeo asked.

“You do not have the Talking Tree, the rarest and finest thing of all,” she said.

That night, Amedeo could think of nothing but the Talking Tree. He hired men to scour the earth, but his explorers returned empty-handed. “There’s no such thing,” they said.

Amedeo thought the woman had been making fun of him. He called her to his home, but she looked him in the eye and said, “I’ve seen the Talking Tree with my own eyes. I’ve heard it speak with my own ears.”

“What did it say?” Amedeo asked.

“Ever to wait for what will never be is the plight of he who does not see.”

Amedeo sent another search team and a year went by, but they returned with nothing.

Amedeo was furious and ordered the police to arrest the woman. “She has made a fool of me!” he screamed.

Amedeo was an important man, and the police did not wish to upset him, but the woman said, “It is not my fault if Amedeo’s men do not know how to search.”

“Why else would she persist so?” Amedeo wondered. He decided he would find this treasure on his own. He set off.

After many days, he came to a valley where birdsong filled the earth and the air was thick with the scent of rich soil and leaves. He lay down to rest, and just as he was falling asleep, he heard a voice call out: “Ever to wait for what will never be is the plight of he who does not see.”

Was this a dream? Amedeo looked around and again heard, “Ever to wait for what will never be is the plight of he who does not see.”

“Who are you?” he asked. Nobody answered, and again he fell asleep, but when he woke at dawn he noticed a beautiful tree with its branches bending to the earth. He tore off a leaf, and a voice said, “Why do you hurt me?”

“Who are you?” Amedeo asked.

“I am the daughter of the king of Spain, and a witch has me under her spell,” the voice explained, and she told him she would never be free until someone swore to marry her and chopped down the tree with the ogre’s magic ax.

“Shh,” she suddenly whispered, “the witch is near.”

Suddenly, the witch appeared and asked Amedeo, “Who were you talking to?”

“The wind,” Amedeo lied. The witch did not believe him, but she could not prove him wrong, and Amedeo decided to try to break the spell.

Just as he was falling asleep in the woods, he heard thundering footsteps.

An ogre was storming toward home, and Amedeo knew ogres ate men. He quickly climbed a tree and hid, and the ogre went on his way.

At dawn, Amedeo slid down the tree, and at the bottom stood the ogre’s daughter, a beautiful girl. “Help me break the witch’s spell,” he said. “And keep me safe from your father.”

“If you wish to break the spell,” she said, “you must marry me.”

She was lovely, but he wanted to marry the girl of the Talking Tree.

“I’m promised to another,” he said.

“Very well,” she said, “I’ll protect you and give you the magic ax.”

She led him through the forest, and when they reached its edge, she reached into a tree and brought out an ax and some magical ointment. This she spread upon his face and said, “Close your eyes and wish and you shall be back at the tree.”

He did just that, and sure enough, he was transported back to the tree in a second. He lifted his ax to chop down the tree, but as he did, the witch appeared.

He remained very calm and said to her, “I’m cutting this tree for charcoal.”

“Very well,” said the witch, “but obey my commands and strike where I tell you to strike.”

Amedeo knew he must not follow her directions, so when she told him to strike high, he struck low. When she stepped forward to pull away the ax, he quickly swung at her and she disappeared.

And in that moment a beautiful girl stepped out of the tree.

They embraced and hurried out of the forest and back to his home.

On the day of their wedding, as the servants were helping the bride to dress, they discovered she was made of wood.

Amedeo quickly understood that she remained under a spell, and he hurried back to the woods and came to the place where he had met the ogre’s daughter.

She took his hand and led him inside the ogre’s house.

He handed her the ax, and as he did, he carefully pricked her hand with its sharp edge. “My dear, I’m sorry,” he said, but with that prick, she began to turn into wood.

“Help!” she cried. “In that cupboard you will find the magic ointment. If you rub it on me, I shall be cured.”

Amedeo opened the drawer and grabbed the ointment, and he raced out of the house and back to his home. There he covered his beloved in the ointment.

And sure enough, the spell was broken, and she was no longer wood.

That night they wed, and Amedeo and his beloved Talking Tree lived happily ever after, and he understood that love is the only true treasure.