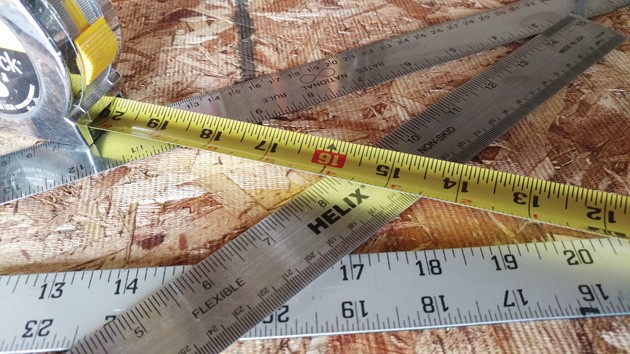 How the U.S. got its standard measurements and how to convert to metric is a fascinating story.

July 20, 2017
American vs. British measures: how to convert ours to metric

Years ago, Maggie and I had the pleasant experience of being able to visit London, England. I was there on business, and Maggie was able to come along and enjoy a bit of sightseeing while I was in the office.

Even though the language was essentially the same, and we and our hosts could clearly understand one another with a few tweaks here and there, it was clear that we weren’t in Kansas anymore, so to speak.

Some differences we noticed were simply customs and norms for that part of the world. How tea is served (we got raised eyebrows when we asked for sweetened iced tea), what side of the street you drove on and smaller packaging for food (such as buying three or six eggs at a time) were things to which we needed to get accustomed.

Adapting to the metric system took a bit of getting used to, as well, along with using their currency. For us Americans with our monochrome paper money, the colorful bills there were a bit confusing. Even so, once you understood the conversion from dollars to pounds, and from miles to kilometers and gallons to liters, all was manageable.

But somewhere in the distant past, all this had to get standardized. Whether it came to distance, volume, land sizes, navigation, weight or depth, having the same definition worldwide or being able to convert from one system of measurement to another is critical.

As a gardener, or a purchaser of produce, what if bushels had differing definitions from state to state or county to county? How would we be sure how much we are producing or purchasing, and would we be able to accurately convey to one another what we meant? Not without great difficulty.

That doesn’t even begin to address other areas benefit from normalization, such as navigation, manufacturing, construction materials, shipping, pressures and purity in all sorts of products. So, standardization of various types and systems of measures is a great thing. As for distances and lengths, it’s been a long process to determine standards.

But, who decided that a foot is a foot, how long a mile is, or how wide roads are to be? What about how much a pound or kilogram is? This is actually a larger and more interesting topic than we can tackle in our short time together, but let’s hit some highlights.

Ancient measures were closely tied to the human body. Descriptions like something being a handbreadth wide, or an object being a “hop, skip and jump” or a “stone’s throw” away are good illustrations. Many a pirate’s treasure map showed distances as paces from objects. Another common distance was the distance from fingertip to fingertip between outstretched arms.

As intriguing as all this is, it’s imprecise. In my own case, it’s about 18-1/4”, not 18”, from my elbow to middle finger tip. That’s about a 1.5% variance for the ancient cubit. If you are measuring something that is several cubits long, the error can grow to be quite significant. My pace is not a yard. I recently measured it and found my average step to be about 35 inches.

Beyond that, people’s feet vary in length, have differing waist sizes, throw rocks (which come in different sizes themselves) various distances, and have varying hand sizes, arms-lengths and thumb size.

But, who decided how long the meter is?

The meter itself was the subject of debate for centuries. What known or familiar object could ultimately be used to determine the meter? The answer was the earth itself. Why? Because while you may have your own opinions, you can’t have your own unique facts. The earth, and its attributes, are the same for everyone.

So, it was determined that a measure that would be the same for everyone was distances and divisions of distance on the face of the earth. The meter would be defined as one ten-millionth of the distance from the earth’s equator to the North Pole. The problem at the time in the late 1700s, no one knew for sure how far that distance was,  by sea, land, tundra and iceberg was way too difficult to accomplish.

What to do? Use math and calculations after measuring a smaller segment of the earth and extrapolate the rest of the distance, that’s what. So, the cities of Dunkirk, France and Barcelona, Spain were chosen, because they are directly north and south of each other. Once the latitude (distance up or down from the poles of the earth) of these two cities were determined, then calculations could be done.

Even so, there were some slight errors and recalculations made to determine the actual length of a meter. For one thing, the earth is not a true sphere, but rather a spheroid. It is a sphere-like object. But, it is slightly flattened at the poles, much like if you pushed an inflated beach ball against the floor with the palm of your hand at the top. Each “pole” would flatten, and the middle would bulge out a bit. Such is the earth.

As many factors that could be determined at the time were taken into account, and actual metal bars made of platinum were fabricated as the actual standard when the measurement was determined. Duplicates were made and distributed. It was found later that these bars were about 2/10th’s of a millimeter too short. I think that’s pretty darn good for some calculations that were made well over 200 years ago.

The meter is the base unit for distance in the metric system; the same philosophy applies to area, weight and volume. We won’t cover those here. But, the system works in base units in multiples or divisions of 10, 100 or 1,000.

Back here, around our yardscape and in the shop, I’m comfortable living with a bit of impreciseness. In my trim carpentry days, another carpenter and I would work in tandem, one measuring and placing, and the other cutting according to measurements called out. Phrases like a skooch (or smidgen) over or under were used and later improved by adding the term “proud” (a bit long) or “shy” (a bit short) to a measurement. You’ll still hear me using these terms if you do any woodworking or carpentry work with me, since now they are a natural part of my vocabulary after all these years.