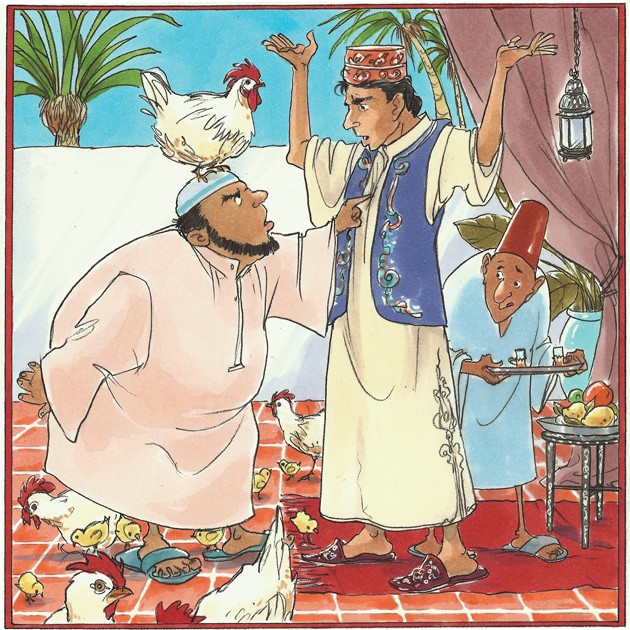 Once upon a time, there lived young man named Amin who worked day and night to make a living. He plowed and harvested farmers’ fields and milked their goats. But when a drought hit the land, Amin had no work. He decided he must move away or starve.

Since he had nothing to sustain him on his journey, he asked his neighbor and friend, Dirar the chicken farmer, for a loan.

“Something to get me started,” Amin pleaded. “I have no food at all.”

Dirar had a barn full of chickens and agreed to help. “I’ll boil you a dozen eggs. They should feed you until you have found a way to feed yourself,” Dirar said.

“Thank you,” Amin said and carefully packed his eggs in a basket. He was grateful — surely, he thought, those eggs would stave off hunger. Besides, the egg is a source of life. And so, with hope in his heart, he set off into the world.

After many weeks, a farmer hired him, and Amin worked tirelessly. He worked for anyone who would hire him, no matter how little they paid. He was careful with the money he earned, so careful that after one year he had enough to buy a small plot of land. By the second year, he had a flock of sheep. By the third year, he had horses and cows.

Each year he did better, adding more animals and more acres to his farm. And by the sixth year of his departure from home, he was a wealthy man, owner of many acres and a herd of camels. He also had pigs and cows and sheep and horses and chickens of his own.

But wealth did not make Amin entirely happy, for he longed for his old village. And so, when he had more than he had ever imagined owning, he sold his land and most of his animals, and with his favorite servant and camel by his side, he mounted his favorite black steed and rode toward home.

As they rode, Amin dreamed of the welcome he would receive in his village. He imagined the words of warmth his old friends would offer, and he smiled as he remembered the sights of all that was familiar to him.

But when he entered his village, no one recognized him at first, though rumors quickly spread of a rich man on a handsome black steed who had appeared. When people discovered this wealthy stranger was their own Amin, they gossiped even more. Soon the people were convinced that Amin’s wealth was even greater. People whispered of palaces and jewels, and many complained behind his back, wondering why Amin was not giving out camels and gold and silver to those who had once been his friends.

Dirar, the chicken farmer, was more upset than anyone, and one afternoon he knocked on Amin’s door.

But Dirar shied from the embrace and grunted, “I’ve come to collect the debt you owe me.”

“You wish me to give you a dozen boiled eggs?” Amin asked.

“I have been very patient, Amin,” Dirar said. “I’ve waited seven years to be repaid. You owe me five hundred pieces of gold.”

Amin laughed and said, “Dirar, eggs are precious, but there is nowhere on this earth where eggs are so costly.”

Dirar had thought long and hard about this. Without hesitation, he said, “You don’t understand. Those eggs could have been my fortune.”

“Old friend,” he said, “I don’t know how you make your calculations. I do not owe you five hundred pieces of gold for 12 boiled eggs.”

“I see I shall have to take this matter to the court,” Dirar said, and he turned around and headed for the courthouse to bring his case before the judge.

The judge sent his men to tell Amin he must appear in court the next day so that the case could be decided.

The next morning, the judge called the court to order. The courtroom was packed — everyone waited to hear what the judge would decide. But Amin was not there, and for 30 minutes everyone waited patiently for him to arrive.

At last the judge reached the end of his patience. “I shall announce my judgment,” he said. “I’m afraid Amin will have to pay Dirar five hundred …”

But before he could finish his statement, Amin dashed into the room, red-faced and out of breath.

Dirar was furious. “Look, he has no understanding of fairness!” he cried. “Everyone understands I might be the richest man in the village, if not for my generosity to Amin.”

The judge scratched his chin as he considered the mathematical possibilities. He knew there were not enough fingers and toes in this whole courthouse to count all the hens Dirar might own by now, and he turned to Amin.

“What do you have to offer in your defense?” he asked. “And why have you shown such disrespect in arriving late?”

Amin looked calmly at the judge and said, “I’m sorry, sir, but I had a plate of boiled beans I had to plant in the garden. I want a good crop next year.”

“Of course not, sir,” Amin said, “but since when do boiled eggs hatch into hens?”

The judge turned red-faced, and he announced the case was closed.

“Amin is not guilty,” he said.

And that was the end of the foolishness about those boiled eggs.