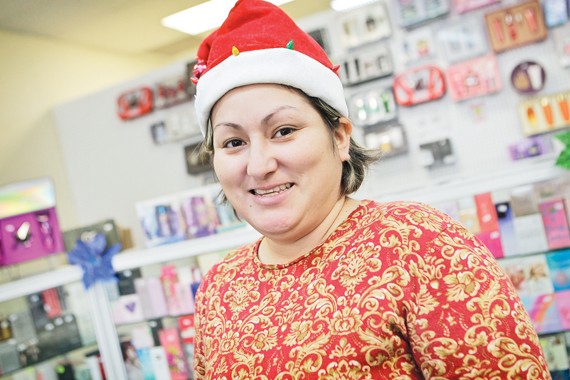 Many traditions of the holidays are passed down through generations and evolve over time. Most of those practiced in America began in some form or another in our ancestors’ countries of origin. For Tooele resident Carolina Garcia, 36, this is no exception.

Garcia was born in Guayaquil, Ecuador. Guayaquil is Ecuador’s largest city, main seaport, and is located southwest of the capital city of Quito. At the age of 19, Garcia obtained a green card, married her husband and left the warm country she loved to move to the United States, settling in Brooklyn, N.Y. A little more than two years ago, after her husband retired, she and her family moved to Tooele where they could be nearer to other family members.

As with many people at this particular time of year, one of the traditions dearest to Garcia is that of family. One of the principal reasons she left the country of her nativity in the first place was for her future family.

“I left my country because we have to help our children to have a profession to succeed in this life,” she said. “This is a country where no one discriminates against my children because they have Hispanic parents. It is a country of opportunity and anyone who wants to get ahead is able to.”

As frequently as possible, she and her family gather in Ecuador at the house of her mother, Pamela. There, on Christmas Eve, she and her siblings await the arrival of the Holy Night, or the night commemorating the birth of Jesus Christ. The evening begins with a large meal of traditional dishes that vary from year to year.

Though it has been three years since Garcia and her family have spent a Christmas in Ecuador, Garcia carries on many of the traditions in her own home. As within the house of her mother, Garcia will spend time with her extended family, cooking the dishes she learned from her mother, who was taught by Garcia’s grandmother. They are recipes, which like other traditions, have been passed down from generation to generation. Last year, guests ate succulent seafood dishes whereas this year Garcia plans to serve an oven roasted turkey with stuffing, Russian salad, rice with sweet corn, custard, and, keeping with the tradition of her mother, soda.

“The traditions that we have, and I speak of all Ecuadorians because we all grow up with the same customs of our ancestors, have been passed down from our mothers, grandmothers, great-grandmothers and so on,” she said. “It is the tradition of having us close, even if we can’t be in the same country.”

After dinner the night is spent talking, dancing and doing the Posadas, which is a traditional nine-day evening celebration lasting from Dec. 16 through Dec. 24. The nine days represent the nine months Mary carried Jesus and recounts the journey of Joseph as he searched for lodging for Mary and her unborn child. Accompanying the tradition, households celebrate by gathering at dusk with children dressed as characters in the Nativity. The children sing a song asking for shelter at a predetermined home and the host sings a reply, lets participants enter and serves refreshments. The party ends on the final day with a rooster sounding to announce the arrival of Christ and then a religious midnight mass.

Though Garcia officially became a United States citizen 12 years ago, she is very proud of her Ecuadorian heritage. Although many of the customs of the United States have been instilled in her teenage sons, as they were born here, she remains hopeful that those cultural practices of her nativity can be preserved and she works maintain some of the traditions of her ancestry. For this reason, Garcia has modified the tradition of the Posadas for her family.

Rather than participating in the traditional nine-day celebration, all relatives living nearby gather together on one day, Christmas Eve. There guests sing Christmas carols, read scriptures and recreate the Nativity. Guests are served hot chocolate and pan de pascua, which literally translates to Easter bread. Easter bread is a dense spice cake filled with bits of fruit, similar to what many of us know as fruit cake. At midnight guests begin opening gifts and finish in the early hours of Christmas morning.

“I am very proud to be able to bring one beautiful aspect of my culture to share and instill into the hearts of my children,” she said. “It is the love and respect that we have for our parents first and foremost, and the love we have between siblings. It is something that is very rare to see nowadays in the world in which we are living. We also take time to thank God for all the good things that have been in our lives over the past year.”

Preheat oven to 350 degrees. In a large mixing bowl, combine all ingredients and mix until evenly distributed. Spread evenly on cookie sheets and place in preheated oven for 20 minutes. Serve warm.

Combine potatoes, peas, carrots, chicken and mayonnaise. Serve heaped in a bowl or spread on a platter. Garnish with parsley.

Preheat oven to 325 degrees. Heat four to five cups of water on a pot on the stove. Combine all listed ingredients in a blender. Put oven-safe custard dishes in a 9×13 pan and pour boiling water around dishes. Pour liquid from blender into each of the dishes and place baking pan with custard dishes in water bath into preheated oven. Bake for one hour. Remove from oven and allow to cool. Refrigerate until set. Serve chilled.

Tear the bread into pieces. Soak bread pieces in milk. In a large pot, sauté onions and pepper. Add peas, carrots, meats, raisins and olives. Add bread. Cook over low heat for approximately one hour, stirring frequently. Sprinkle with salt to taste. Make sure all cuts of meat are cooked through before serving. Serve warm.