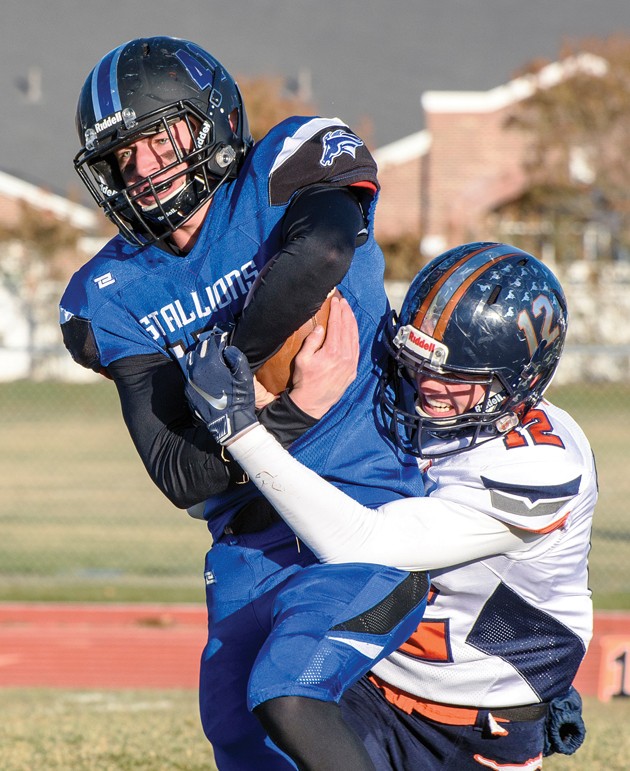 Stansbury’s Cayden Clark (41) drags Mountain Crest’s Mason Baldwin for extra yardage after making a catch during the first half of Friday’s Class 4A second-round state playoff game at Stansbury High School. Clark caught the game-winning touchdown with 17 seconds left to give the Stallions a 28-24 victory.

The finish of Friday’s Class 4A second-round state playoff game between Stansbury and Mountain Crest won’t soon be forgotten in Stansbury Park.

No timeouts. 1:15 on the clock. Mountain Crest leading 24-21. Eighty-one yards from the end zone.

No problem for Stansbury junior quarterback Kru Huxford and the Stallions’ stable of offensive weapons.

Aided by a pair of pass-interference penalties, Huxford led the Stallions down the field as they worked their way deep into Mountain Crest territory. On the eighth play of the drive and with just 17 seconds left on the clock, Huxford found fellow junior Cayden Clark open over the middle for a 10-yard touchdown, lifting the sixth-seeded Stallions to a 28-24 win over No. 11 Mountain Crest at Stallion Stadium.

Stansbury (8-3) had never led in the game after spotting the Mustangs (5-7) a 14-0 lead in the first half. But with the game on the line, the Stallions’ offense was a well-oiled machine. Huxford found Tommy Christopherson for a 19-yard completion on the first play, but an incomplete pass and a failed quarterback keeper had Stansbury facing third-and-10 from its own 38-yard line. That’s when the Stallions caught their first break, as Mountain Crest was flagged for pass interference to give Stansbury a first down at the Mustangs’ 47.

Stansbury reached the red zone on the next play, a 27-yard pass from Huxford to Lawson Wihongi. After an incompletion on first down, the Mustangs were called for pass interference again as Jordon Snow threatened to break free down the right sideline. That set up first-and-goal at the Mustangs’ 10-yard line, and the game-winning pass from Huxford to Clark that will live on in Stansbury lore.

“Right as I saw that ball come out of Kru’s hand, I thought, ‘this one’s for all the seniors and all the people we had injured this year,’ so we could keep going and we didn’t have to end the season,” said Clark, fighting back tears after the thrilling finish. “It feels amazing — the best feeling in the world.”

While it was the offense that ultimately put up the game-winning points, the Stallions’ defense came up with three crucial fourth-quarter stops that gave Stansbury a chance late. The first came with 6:46 left in the game, after Mountain Crest drove down to the Stallions’ 21-yard line with a four-minute, 12-play drive to set up a 38-yard field-goal attempt by Brandon Arnell. But Stansbury’s Kaden Kolb broke through and blocked Arnell’s kick, keeping the game tied at 21-21.

However, 1:25 later, Huxford’s third-and-8 pass was intercepted by Mason Baldwin, who ran the ball back to the Stallions’ 16-yard line. In a spot where a touchdown could have spelled disaster for Stansbury, the defense stuffed Mustangs running back Hunter Schroeder for a 1-yard loss on second-and-5, and forced an incomplete pass by Tadon Burbank on third-and-6 to hold Mountain Crest to a 27-yard Arnell field goal and a 24-21 advantage with 3:50 left.

“When we needed to get a stop, we did,” Huxford said. “We stepped up. After the interception, all I could think of in my head was how down I was. I thought I lost us the game, but they all picked me back up and said, ‘we’re going to finish this.’ They did it. Our defense did it.”

Stansbury turned the ball over on downs deep in its own territory on its next possession, giving Mountain Crest a chance to run the clock out. But, again, the Stallions’ defense didn’t break, stopping Schroeder for no gain on third-and-4 and forcing another incomplete pass from Burbank on fourth down to set up the game-winning drive.

“I’m still double- and triple-checking to see if we actually won,” Stansbury coach Eric Alder said. “I’m pretty sure we did — that’s why we celebrated. It was one play at a time — try to get a completion, then another completion. We did the two-minute drill this week in practice, as we always do. Trust in your training, trust in each other, and just one play at a time.”

Stansbury trailed for most of the first half after Schroeder capped a five-play, 78-yard drive with a 1-yard touchdown run with 9:24 left in the first quarter. The teams exchanged missed field goals — Kolb missed wide left from 32 yards and Arnell came up short from 42 yards — later in the first quarter, while Arnell stymied a promising Stansbury drive with an interception early in the second quarter.

A goal-line stand forced Stansbury to turn the ball over on downs inside the Mustangs’ 5-yard line late in the second quarter. The Stallions nearly got on the board as Schroeder barely escaped a safety on first down, but Burbank hit a wide-open Kolmyn Foulger for a 99-yard catch-and-run on the next play to extend Mountain Crest’s lead to 14-0 with 2:29 left in the first half.

Stansbury cut the lead in half on its next possession. Huxford found Clark for a 12-yard gain on third-and-10 to keep the drive alive, and then found Wihongi open over the middle when a Mountain Crest defender fell down, allowing Wihongi to pull away for a 55-yard touchdown with 1:37 left in the half. The Stallions forced a quick three-and-out to get the ball back 21 seconds later, and after three straight completions to Wihongi totaling 49 yards, Stansbury found itself back in striking distance.

An 8-yard run by Huxford and a 4-yard run by Tommy Christopherson moved the ball to the Mountain Crest 16-yard line. On first down, Huxford found Snow, who tiptoed along the sideline in the end zone to snag the game-tying touchdown.

Mountain Crest regained the lead on a 37-yard touchdown run by Emilio Veater with 7:44 left in the third quarter, but allowed Stansbury to tie the game with a shanked punt early in the fourth quarter. The Stallions got the ball at the Mustangs’ 30-yard line after a 24-yard boot, and a defensive holding call against Mountain Crest moved the ball to the 20. From there, Christopherson ran virtually untouched straight to the end zone to tie the game with 10:53 left.

“Champions make plays, champions win games, and that’s what happened tonight,” Alder said. “We’re about three things here when it comes to playing football. No. 1 is our effort. That’s never wavered. No. 2 is our execution — we weren’t perfect. No. 3 is our competitive excellence, and that’s making plays at the critical times of the game when it’s needed most. We made some mistakes and we had some offensive miscues, but when we needed it most, we went and won the game.”

The Stallions’ defense was just as impressive, limiting Schroeder to just 32 yards on 23 rushing attempts after averaging 133.9 yards per game through the Mustangs’ first 11 contests. Burbank was 7-for-16 for 227 yards and a touchdown, and Veater had 147 yards on 11 carries.

Payton Didericksen led the Stallions with 15 tackles, including a tackle-for-loss. Dillon Carpenter had 12 tackles and Andrew Hanson had 10 tackles and three TFLs. Didericksen, Huxford, Christopherson, Clark and Jacob Nunley each had a pass breakup and Christopherson recovered a fumble.

Stansbury will hit the road Friday afternoon to face No. 3 Dixie (8-2) in a state quarterfinal game at 4 p.m. in St. George. The Flyers beat No. 14 Ridgeline 38-7 in the second round.

“The seniors are still playing football and that’s the most important thing,” Alder said. “We’ll go give it our best shot down in St. George in a little warmer weather. This is a great group of kids — a close group, and they’ve got great chemistry. They love each other, they love playing and we’re going to do it as long as we can.”