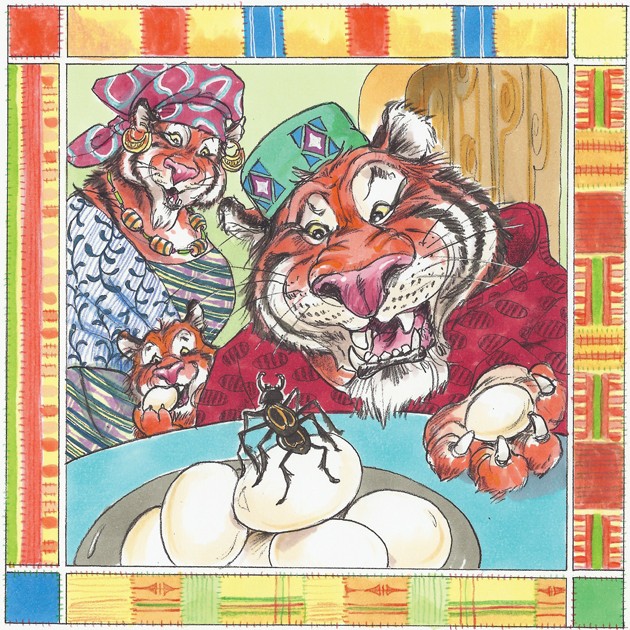 One afternoon long, long ago, Anansi the Spider was sitting at home when Firefly happened to fly past. When Anansi saw him, his eyes lit up. He had a fine idea.

“Firefly, stop in and visit,” he said.

Firefly did, and after they had talked awhile, Anansi suggested they go hunting together in the hen houses.

“We can collect eggs!” Anansi said.

“That sounds good,” Firefly said. “Come to my house when the sun sets.”

Anansi loved hunting, and he loved eggs. And Firefly was the perfect hunting companion for anyone who liked to sneak around.

And so Anansi idled away the afternoon — as he did so often — and when the sun set and darkness rolled in, he hurried to Firefly’s house. Together they set off for the first farmer’s field, and there they sneaked into the warm hen house.

It was dark inside, but Firefly opened his wings, and when he did, he lit up like a lighthouse. In the flood of light, Anansi could see all the eggs.

These were the farmer’s eggs, of course, but once Anansi saw anything, he considered it rightfully his. So he went to work, picking up every single egg and placing them carefully in his basket.

When he had gathered every one, he and Firefly hurried to the next farm, and to the next hen house. Once again, they set to work.

But as the night wore on and they visited one hen house after another, Firefly began to grow tired, and he wondered if this wasn’t a mistake.

Anansi’s basket was overflowing, and as they moved on across the dark countryside, Firefly said, “Come, let’s go to the next hen house, and this time you’ll fill my basket.”

But Anansi shook his head. “I’m too tired to do any more hunting,” he said. “I think I’ll just take my eggs home.”

Now Firefly understood. Furious, he said, “Goodbye to you then,” and he flew away as fast as he could, leaving Anansi stranded in the dark.

They had walked for a long, long time, and Anansi had no idea how to find his way home. He began to make his way along the dark road, feeling this way, feeling that way, holding the basket of eggs so it did not spill, but he couldn’t see a thing. Suddenly, he bumped smack into a farmhouse.

“What’s this?” he said, rubbing his sore head. “Hello!” he called into the house. “Anyone home?”

A gruff voice called back, “Who’s that at my house?”

“It’s Anansi, your good friend!” Anansi called. He recognized that voice. It was Tiger’s.

Tiger stuck his head out the window and glared at Anansi. He recognized the fellow who had tricked him many times, the chap who had tried to make a fool of him. And nobody makes a fool of Tiger.

Tiger was a clever fellow, too. And so, although Anansi was no friend of his, he said, very sweetly, “Come in, my friend.”

Anansi was cold, he was tired, and he wasn’t fond of the dark, so he stepped inside, and the moment he did, Tiger shut the door behind him.

“Look at those eggs!” Tiger said. “Let’s boil them and have a feast.”

Before Anansi could say a word, Tiger put a big kettle on the fire and called out to his wife and many children: “Come see our midnight snack!”

Tiger’s wife and children traipsed into the room, and the moment those eggs were boiled, they began to gobble them down.

Anansi was nervous surrounded by all these tigers. “No, no, that’s fine,” he said. He didn’t want to upset the tigers, and when all the eggs were gone, Tiger waited until Anansi was looking the other way, and he dropped a lobster into the kettle.

He covered the lobster with all the eggshells.

“You’ll stay the night, won’t you?” Tiger grinned, and Anansi nodded when he saw those gleaming teeth, sharp as knives. He didn’t like to disagree with Tiger.

Before long, everyone was fast asleep — everyone but Anansi, who pinched himself over and over again so he would stay awake. And when he heard everyone snoring, he tiptoed to the kettle, reached inside to grab an egg, but the lobster pinched him hard.

“Are you all right?” Tiger called from the far side of the room.

“Are you sure you’re all right?” Tiger called.

“There are terrible fleas in this house!” Anansi cried.

“Fleas!” Tiger said. “How dare you insult us,” and roaring, he leaped toward Anansi.

Anansi raced to the door as fast as he could, and Tiger stopped and grinned as he watched that spider hurrying home.

And he never went hunting with Firefly again.