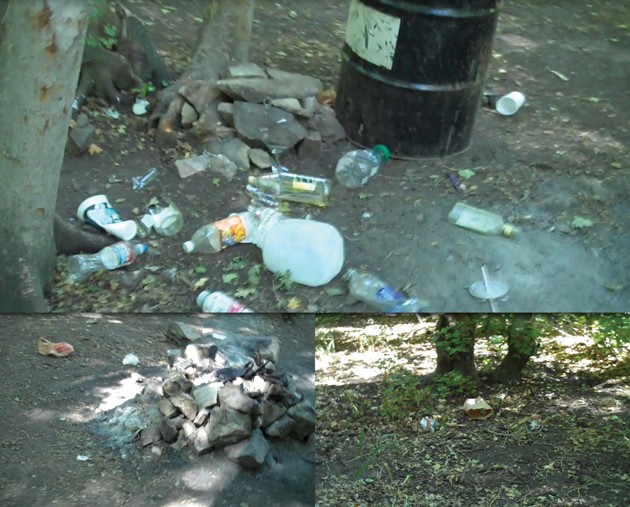 This garbage was left behind at a campsite in Middle Canyon above Tooele City.

February 19, 2015
Animals can suffer harm from litter left behind

Many know that littering can destroy the beauty of nature and that you can be fined if you get caught doing so. Yet in many places, this awareness does not stop the constant build of trash found in campsites, parks, unowned property, roadsides and the wilderness. Though it is not just nature that pays, it is the creatures as well, and even the simplest of things carelessly discarded can cause harm or death.

Most animal reports involving litter are about having something caught around their necks or heads. Things such as rubber bands, wheel hubs, cans, plastic gallon milk rings, jars, construction tape, bags, tins, fishing line and plastic can-holders are all known for getting stuck around animal’s necks. Unbroken jars are known to trap the heads of larger animals and encage smaller animals. If an animal can’t detangle itself from litter, objects such as these are known to eventually cause severe wound punctures due to longtime wear. Additional results can include infections, cuts, suffocation, strangulation or starvation.

Undigested litter that is mistaken for food can cause sickness in a creature, choking or death. Most reported litter that falls in this category include balloons, plastic bag bits and fishing equipment. Birds are mainly the ones to eat abandoned rubber fishing tackle, which can cause sickness or choking. However, hooks with fish bait on them can cause death. It is also important to be aware of not releasing balloons into the atmosphere, for they always eventually land somewhere and become a hazard.

Other littered objects such as cans and glass are reported to cause severe cuts or puncture wounds to animals that step on them, lick them, touch or investigate them.

A few years ago, our family came across a campsite in Middle Canyon where the people had just left. We drove in and parked and we were astounded that people could be so careless and neglectful for our natural resources. There were beer cans, dirty diapers, paper, plastic pieces, broken glass and even a smoldering fire, left for someone else to take care of. This blatant disregard is dangerous to animals and humans.