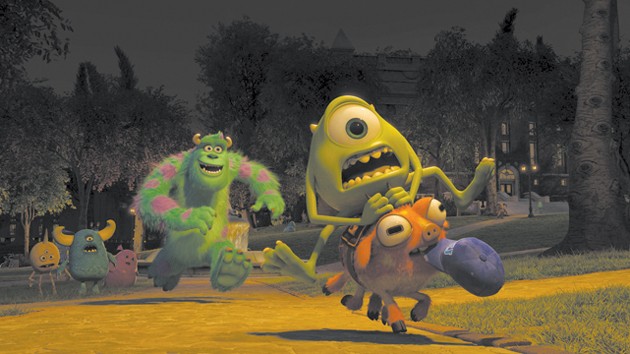 June 20, 2013
Animation in ‘Monsters U’ is a gorgeous blend of real and absurd

Making a sequel to a really good movie must be daunting, but I’d think making a prequel of the same movie would be harder.

After all, not only do you have to reach the same level of quality as the original, but then you have to reverse character development while keeping all of the rules of the story’s universe. This is probably why most stories are written from the beginning instead of backwards.

Despite the difficulty, “Monsters University” gives fans the same sense of fun, magic and just a little fear that made “Monsters, Inc.” such a success in 2001.

“Monsters University” follows a college-age Mike Wazowski (Billy Crystal) as he pursues his life-long ambition of becoming a scarer. Rooming with another scaring major, Randall Boggs (Steve Buscemi), he obsessively studies, memorizing every textbook written on the subject, determined to become the world’s best scarer. His polar opposite is Jimmy “Sully” Sullivan (John Goodman), who comes from a long line of scarers and doesn’t see the need for books or tests to become a scarer. The two are immediately at odds, and a mid-class showdown results in them both being ejected from the scaring program by the stern Dean Hardscrabble (Helen Mirren).

There is one last hope for the dejected pair, though: The Scaring Games. Mike makes a wager with Hardscrabble that if his team — the four members of the Oozma Kappa fraternity, himself, and, reluctantly, Sully — can win the annual competition, the whole lot of them will be allowed into the scaring program, and if they lose, they will be expelled. Hardscrabble agrees, but she, and the other competing groups, see them as a joke — for good reason. The group, made up of the aptly named Squishy (Peter Sohn), two-headed Terri (Sean Hays) and Terry (Dave Foley), tentacled “mature student” Don (Joel Murray) and philosophical Art (Charlie Day), is hardly made up of scary-looking monsters.

Somehow, though, they make their way up the ranks in the competition, much to the surprise of Hardscrabble, Roar Omega Roar President Johnny (Nathan Fillion) and everyone else. Still, though they’ve begun to learn how to work as a team, they have a lot of obstacles to overcome, not least among them the divide between talent and technique.

This movie is great because it requires no knowledge of “Monsters, Inc.,” though fans are rewarded with glimpses of characters and foreshadowing of events that take a front seat in the original. You feel like you’re meeting Mike and Sully and Randall for the first time, even if their first impressions don’t quite match up with their more mature characters. It does a good job of correcting that, too, showing or hinting at experiences that molded our young monsters into what we know they become.

The animation is, like its predecessor and virtually every other Pixar film, a gorgeous blend of the real and absurd in the monster universe. The chaos of college translates well, with Sully stealing rival school Fear Tech’s mascot, Oozma Kappa visiting a loud party. There are also students frantically finishing projects and cramming for tests—even though all of the students have horns or scales or fangs or fur or odd numbers of limbs or eyes. The collegiate essence feels real.

The script is great, and the voice actors make use of it. Goodman, Crystal, Buscemi, Fillion and Mirren don’t disappoint, and John Krazinsky, Billy Moynahan, Alfred Molina and Bonnie Hunt also deliver. The 110-minute-long movie is a little longer than the 92-minute “Monsters, Inc.,” but the story doesn’t really drag and the kids in the theater seemed to be plenty entertained throughout.

As always, Pixar has put a cherry on top by way of an adorable short before the show, this time about an umbrella who falls in love and the anthropomorphic objects that help them be together. If you stick around through the credits, which isn’t a huge hardship because they roll to the percussive sounds of The Blue Devils (if you haven’t heard of them, YouTube exists for that very purpose), there’s a short, but chuckle-worthy, scene at the end.

All in all, “Monsters University” is frighteningly fun for fans old and new as a prequel that lives up to the Pixar name.