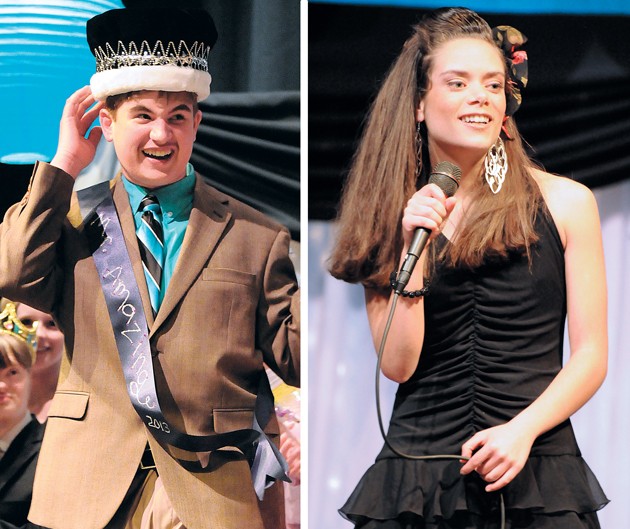 Rebecca Ford, THS’s special education teacher, said she began the pageant three years ago after talking with one of her peer tutors about how nice it would be to hold a pageant for people with disabilities.

“There are three things that I love: pageants, glitter and people with disabilities,” she said. “We started the pageant three years ago and it’s been going ever since and we plan to do it for many more years. It’s the only one of its kind that we know of that is for boys and girls.”

The pageant is for people with disabilities who are between the ages of 14 and 28 and live in Tooele County. Students from Grantsville, Tooele and Stansbury High Schools participated this year, along with a few members from the community. There were a total of 15 contestants in the pageant.

The categories that each contestant participated in were famous wear — where they had to dress like the famous person of their choice — on-stage question, talent and formal wear.

Graves dressed as a doctor for the famous wear portion and wore a suit for the formal wear portion. His on-stage question was: “If you were to have dinner with a celebrity, who would it be and why?” His answer was Nicki Minaj, because she’s pretty and she’s his favorite judge on “American Idol.” For his talent, Graves sang a duet with his escort, Kirsti Johnson, to “Mean” by Taylor Swift.

Cornett dressed as Batman for her famous wear and wore a red and black gown for the formal wear portion. Her on-stage question was: “If you could be any animal, what animal would you be and why?” Her answer was a cheetah, because they catch their prey and are survivors like her. For her talent, Cornett sang “Rolling in the Deep” by Adele.

Besides singing, other talents that contestants displayed were dancing, stand-up comedy, voice impressions, dog tricks and a baton routine.

At the end of the night, each contestant walked away with a crown and a sash.

“All of them were just super excited to be there,” she said. “This was a wonderful event that benefited all of Tooele County and changed many lives. We had over 1,000 people in attendance. It really was amazing.”

In addition to the contestants strutting their stuff on stage, a few other performances took place. The THS Dance Company and Z-Motion Dance group both performed. The Jazz-In-It Firecrackers also danced during the pageant.

“It’s pretty amazing what they do,” Ford said. “The [Firecrackers] is a free dance group for people with disabilities of all ages. We also had performances by last year’s Miss Amazing, Amber Bailey, and last year’s Mr. Amazing, Miguel Zapata. They also helped Miss Utah USA 2013 crown the new royalty. It really was spectacular.”

Ford said monetary donations, as well as items donated for a silent auction that took place during the pageant, will be used to pay for the pageant as well as special needs programs within the county. In addition, the pageant had close to 100 different local business and private sponsors.

“Rebecca doesn’t get paid any extra to do this,” she said. “She spends countless hours doing this pageant. She is amazing and makes a big difference for the kids. We’re honored to have her in the district.”