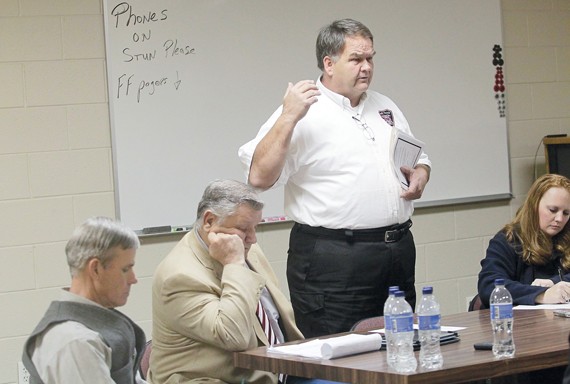 December 25, 2012
Another tax pitch gets shot down

Two days after Tooele County commissioners got an earful from residents opposed to a planned county property tax hike, North Tooele County Fire District officials heard much of the same in response to their proposed tax increase from a room filled mainly with Lake Point residents.

The four full-time firefighters would then split into two alternating 14-hour, two-day shifts that would put them on duty during the time when approximately 84 percent of all calls have come in throughout the last few years, Willden said, leaving a smaller amount of calls to be responded to by volunteers. The increased coverage would also help firefighters be better equipped to respond to a rising number of calls as Tooele County grows, he said.

More than two dozen people attended the truth in taxation meeting held Thursday night in the Lake Point Fire Station, and with few exceptions they spoke against the proposal. Many in opposition cited the lagging economy and other recent tax increases, such as the 82 percent increased being pitched by Tooele County and the 9.1 percent increase approved by the Tooele County School Board in August.

Mike Johnson, a Stansbury Park resident, said he believed the purposes for the tax increase were good but unnecessary.

Kevin Trimble, a Lake Point resident, said those other taxes, as well as previous tax increases by the NTCFD, make him hesitant to support another tax increase.

A decision on the tax hike will come at next Thursday’s budget meeting. If approved, the increased tax rate would not take effect until next August. Willden said in the meantime district administrators would be trying to find extra funding in mitigation fees and grants. If the requisite funding is found before the tax rate comes into effect, Willden said, the fire district would not implement the new rate.

“North Tooele County [Fire District] has the opportunity to ask for a tax increase,” Clegg said. “You citizens tonight have had the opportunity to come to a truth in taxation meeting. It’s possible that you could have come tonight and said you were concerned about your health and safety and welfare, but you said you were concerned with rising taxes. I’m glad that you came because in my opinion you’ve come and given a clear, distinct message and it will help me make up my mind and make my choice.”

The Tooele County Commission will make the final decision regarding the acceptance or denial of the proposed increase.

The NTCFD’s budget meeting will be on Thursday, Dec. 27, at 6:30 p.m. at the Stansbury Park Fire Station. It is open to the public. The tax increase will be decided until a meeting next August.