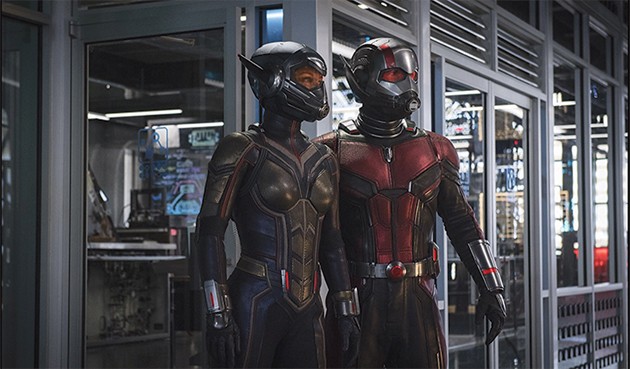 Evangeline Lilly and Paul Rudd star in “Ant Man and the Wasp.” (Courtesy of Marvel Studios)

Most superhero movies are often similar and follow such a straightforward structure that I’ve started to guess how a movie is going to end just by watching its trailer. “Ant Man and the Wasp” doesn’t attempt to be something different, but tries to recreate the good of Marvel movies.

This episode of the Marvel television show follows Scott Lang/Ant Man (Paul Rudd) as he is under house arrest from the events that happened in “Captain America: Civil War.” He goes about trying to be a good father and minding his own business while he only has a few days left of his house arrest.

From the events of the last movie, Dr. Hank Pym (Michael Douglas) and Hope van Dyne/Wasp (Evangeline Lilly) now know that someone can return from the quantum realm. It turns out, they have been building a machine to reach the quantum realm in order to bring back Janet van Dyne (Michelle Pfeiffer).

When the quantum realm is briefly opened, Scott has a dream in which he is a mom playing hide-n-seek with a little girl. Even though he has a few days left on his house arrest, he calls Hank and Hope and leaves them a message about what he saw. Hank and Hope know that the dream Scott had was about Janet, that she is still alive, she sent a message, and that when Scott went to the quantum realm in the last movie, his mind became entangled with her’s.

Hank and Hope kidnap Scott and leave a decoy in his place. Their plan is to get a piece to the machine that will allow the quantum realm to stay open longer. They plan a meeting with their regular parts supplier, black market dealer Sonny Burch (Walton Goggins). The meeting goes awry, and Wasp fends off Sonny’s guys until a masked vigilante arrives who steals the machine. It’s up to Scott, Hank, and Hope to get the machine back before this unknown person uses it.

This movie is typical Marvel stuff. If you think Marvel movies are great, than you will probably enjoy it. I thought “Avengers: Infinity War” was one of the better movies because it was different than the last dozen that have come out. It gave me hope because I thought the Marvel Universe was starting to take more risks. Regrettably, “Ant Man and the Wasp” takes none of those risks.

Yet, it is still an entertaining movie. A few jokes made me laugh and I thought some of the fight scenes were well choreographed. The biggest blunders the film makes are the breaks of logic. There are characters who are supposed to be smart, but don’t listen to reason. I didn’t see why there was a conflict between the good guys and the bad guys. They were after the same thing, so why didn’t they just work together? This movie would have been resolved more simply (but more boring) if the characters had explained why they were doing certain things. They even had plenty of opportunities to do so, but chose not to.

Marvel lives by the motto, “If it ain’t broke, don’t fix it.” I now see Marvel isn’t planning to fix it until absolutely necessary, but that time may soon be at hand.

“Ant Man and the Wasp”