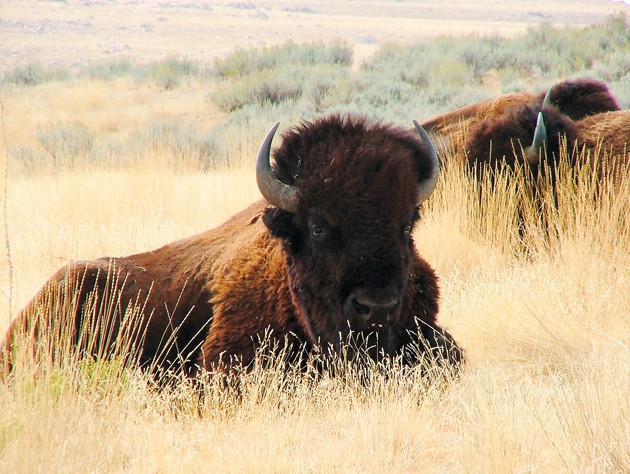 A herd of bison rest in the grass at Antelope Island.

The North American Bison is possibly the most prolific beast to ever roam the plains. It is an unforgettable experience to be near one. It is also sad to realize that over 60 million of them freely roamed the North American continent in the early 1800s.

That was before white man began to show up on the plains in droves. The tragic history that followed is well known.

As the buffalo teetered on the brink of extinction, a man named William Glasmann of Ogden, Utah imported some from Nebraska to start a herd in 1893. In the book “Visions of Antelope Island,” author Marlin Stum describes how four bulls, four cows and four calves were taken across the Great Salt Lake on a barge to Antelope Island.

They started a herd that was intended to be seed stock for a big game hunting venture. That herd thrives today on Antelope Island.

The island is visible to the northeast on the Great Salt Lake from Tooele Valley. It measures about 16 miles from north to south and 5 miles at the widest point. Due to extreme drought, Antelope Island is now actually a peninsula, connected to the mainland by a salt playa land bridge on the southeast corner of the island.

Antelope Island is now a Utah State Park and one of the main attractions is its buffalo herd, which is allowed to range freely. The herd subsists entirely off the range. There is good grass and water on the island and the buffalo are only provided supplemental feed during the worst cases of drought or difficult winter.

Because the buffalo share the island with about 500 mule deer, 200 pronghorn antelope and 150 desert bighorn sheep, their number is carefully managed by the state. According to Jeremy Shaw, who is manager of the state park, Antelope Island can accommodate up to 550 head of buffalo. He also stated that buffalo are prolific multipliers. They have fewer complications at birth than domesticated livestock so their numbers increase rapidly.

Each year around 200 calves are born bringing the herd’s population to over 700 animals, which is over the carrying capacity of the range. In order to maintain an ecological balance, the state conducts a roundup of the animals each year and auctions off nearly 200-220 animals. These animals go from $1,000-$1700 each and the money raised pays for the roundup, inspection, vaccination, weighing and general health assessment of the animals. A large portion of the remaining funds is then reinvested into the park.

The roundup occurs every fall and this year it will be on Oct. 23-24. Shaw said the public is welcome to come and observe the buffalo roundup. It is the ideal opportunity to get an up close look at an animal that is deeply steeped in western folklore and personifies the period of the Native American’s dominance of the great plains and the push of westward migration of the pioneers.

Additionally, if you ride a horse and have the ability to transport it out to the Island, for a $50 per rider registration fee you can actually participate in the roundup. What an experience it would be to view this spectacle from the back of a horse and get a taste of what the old west was like back in the day.

According to Shaw, the roundup is typically complete on the first day, so the best chance to see action is on Oct. 23. The weekend of Oct. 29-31 is spent working the animals through health inspections and weighing. On Nov. 6 there will be a live auction where the animals typically go for $3.50-$4.50 per pound on the hoof.

The public is welcome at these events so check with the park for further information. There is a $10 per vehicle charge (up to 8 people) to enter the park via the causeway from the Syracuse area. Camping is also available on the island with RV pads, fire pits, picnic tables and vault toilets, but no electrical hookups.

Many who have lived in Utah for a long time may cringe at the thought of camping on the island due to clouds of mosquitos and biting gnats. According to Shaw, there is about a six-week period in late spring/early summer where the gnats are bad, but for the rest of the year, bugs are not a serious problem.

In fact, September and October are the busiest months of the year for camping on the island. If you want to get a campsite, you will have to plan ahead because they are full most Friday and Saturday nights during that time.

If you visit the island, make sure that you keep an eye out for the thousands of migratory and perennial birds that live there. Ducks, pelicans, seagulls, avocet, long bill curlew, great horned owls, peregrine falcons and golden eagles are some of the commonly seen species.

I have visited the island several times and on one occasion was lucky enough to encounter the buffalo. I noticed them off the side of the main road. I parked my vehicle and approached the massive bulls that were sitting like giant humps in the grass.

I was careful to keep a safe distance because all bets are off when you are dealing with an animal that possesses speed, agility — and a disagreeable temperament if threatened. It was a gift to sit under a late summer sky and watch these living relics from a bygone era.

A visit to the island is a great outing for families or individuals. Take advantage of natural history on display and a true surviving icon of western Americana. For more information about fees, times of operation and access, visit the Antelope Island State Park website at http://stateparks.utah.gov/parks/antelope.island/

If you are lucky enough to observe a buffalo up close, realize that it is watching you with a keen eye and even the largest bulls are agile and faster than you. It’s best to keep a safe distance.